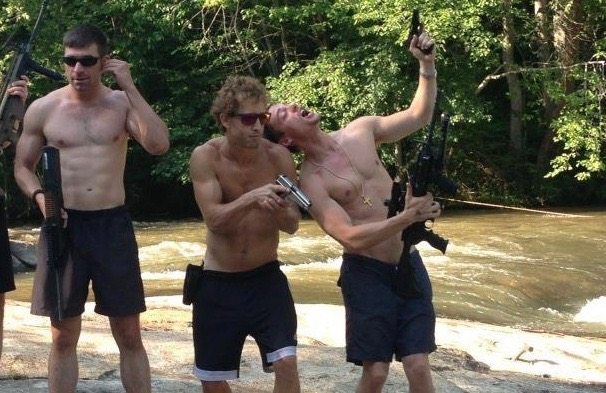 To be clear: We don’t know exactly what went down outside the $2 million German castle located at 229 Altamont Road (near Greenville, S.C.) on Saturday.

All we know is that one person – a 32-year-old man by the name of Matthew Whitman – wound up getting shot and killed at the 30-acre estate owned by wealthy apparel magnate Allen Stephenson.

We also know that Stephenson pulled the trigger of the shotgun that killed Whitman … ostensibly in response to an attempted knife attack by Whitman, someone Stephenson claims he did not know prior to the alleged assault.

If this version of events – related by Stephenson’s attorney – is true, then police ought to immediately absolve the wealthy businessman of any wrongdoing and let him go on his merry way (i.e. continuing to make big sweet dollars off of selling clothing to frat boys and sorority girls).

But Stephenson’s close proximity to prosecutors in the Greenville area – most notably S.C. Senate candidate William Timmons – has some questioning whether he is receiving special treatment in the case.

For example … why was his name not immediately released by authorities in the aftermath of the shooting?

Opponents of self-defense laws are also looking very closely at the case to see if there is any way they can use it to weaken South Carolina’s “Stand Your Ground” laws – as well as its “Castle Doctrine” protections.

Anyway, gun rights opponents will no doubt be emboldened by pre-shooting images of Stephenson (far right) and his buddies showing off their various weaponry …

Obviously gun rights are under attack in South Carolina at the moment … which is bad.  Fortunately, it appears as though efforts to weaken second amendment protections are not gaining any traction legislatively.

This website has consistently embraced gun rights – going so far as to recommend civil disobedience of any law that runs counter to the second amendment.  Aside from the obvious constitutional rationale, there’s a practical equation at work here: More guns = less crime.

Gun ownership is a right … and an important safeguard of life, liberty and property.

If the Allen Stephenson case went down the way his lawyer said it did, then it should be a compelling affirmation of this principle … as well as the necessity of “Stand Your Ground” laws.