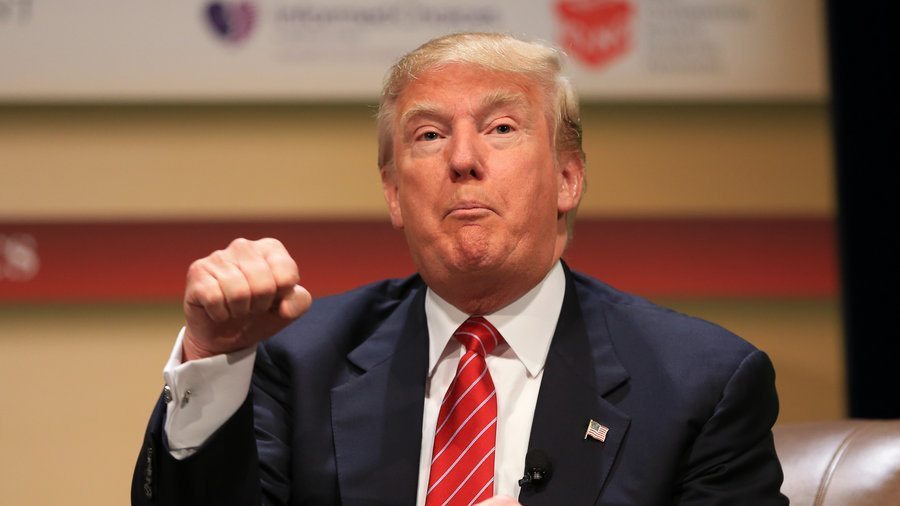 Despite a barrage of negative attacks from multiple rivals – and a diss from the state’s popular governor, Nikki Haley – GOP frontrunner Donald Trump continues to cruise in early-voting South Carolina.

Three new polls – one from CNN/ ORC, another from the American Research Group (ARG) and a third from the S.C. House “Republican” Caucus – continue to show Trump with a big lead over the “Republican” field in this pivotal “First in the South” presidential primary.

It also further debunks polling released by the SuperPAC supporting establishment GOP hopeful Jeb Bush – who registered only ten percent of the vote in both of the new surveys.

CNN/ ORC surveyed 404 likely GOP primary voters between February 10-15.  The survey’s margin of error is plus or minus five percentage points.

In the American Research Group survey – also released late Tuesday – Trump was backed by 35 percent of respondents, putting him twenty points ahead of Ohio governor John Kasich (15 percent), a surprise second place finisher.  That poll had Rubio in third place with 14 percent, Cruz in fourth place with 12 percent and Bush in fifth place with 10 percent.

The ARG poll surveyed 400 likely primary voters from February 14-16 and has a margin of error of plus or minus five percentage points.

This website endorsed Trump’s candidacy last month as a rebuke to the “Republican” establishment. Four years ago we endorsed the primary bid of former U.S. Rep. Ron Paul.

Michael McDaniel: "Battle For The Brethren" In South Carolina

When SC GOPer goobers have to choose between prayer and prejudice, the latter always wins.

South Carolina Gov. Nikki Haley says she may not endorse anyone ahead of Saturday’s first-in-the-South GOP primary, but if she does, it certainly won’t be Donald Trump.

Haley said Tuesday she’s still trying to make up her mind. But she said Trump represents “everything a governor doesn’t want in a president.”

I can see that.Trump wants to hold politicians and government agencies accountable. Haley has never been held accountable for alleged multiple affairs,tax issues,hacking fiasco,DSS,protecting PP and many other debacles.

She would have been impeached or defeated after one term with any scrutiny.

Trump is a RINO and a Democrat at heart.

Hillary is a criminal and Bernie is a communist.You’re point.You once compared Christian conservatives with ISIS.

Trump is still a RINO and Democrat at heart.

Fool.You and your ilk are why Obama was elected 2x’s.Soul less mounds of flesh unable to think outside the box of perpetual hopelessness.

You supporting Trump is enough for any sane person to think twice about supporting him.

See.You just admitted you are to stupid to figure out who to vote for yourself.

So, thinking twice is stupid but then someone as stupid as you would think that. I haven’t taken Trump off my list but it makes me wonder what kind of hold he has on you and your ilk. I play devils advocate to gain insight. Your responses don’t help your candidate at all.

8 survey calls today, told every one of them I was voting for the Trumpster (rhymes with dumpster). Would only vote for him if it was between him and Andre Bauer…

I just got one, half way through I told him I thought polls were BS and didn’t want to play anymore.

He’s either bipolar or there’s two different people who watched M.A.S.H. back in the day. Some days he agrees with me, some days he opposes everything I say and some days he’s even coherent.

It is POGO. want to draw him out, talk about The Ohio State Losers. Gets him every time.

The only reason they hired their coach, what’s his name again, they wanted to be like Florida.

On four occasions Trump’s businesses filed for bankruptcy and stiffed blue collar workers and bank shareholders out of millions of dollars. In America, you apparently have a legal right to be a deadbeat. After Trump got back on his feet and became a multi-billionaire, he could have voluntarily tracked down the people who were owed money and paid them. You know, like a man would do. Instead he chose to keep the money.

I am not crazy about Trump but screw these career politicians. We elect Republicans and they side with the other side. Don’t ask for my support and vote.