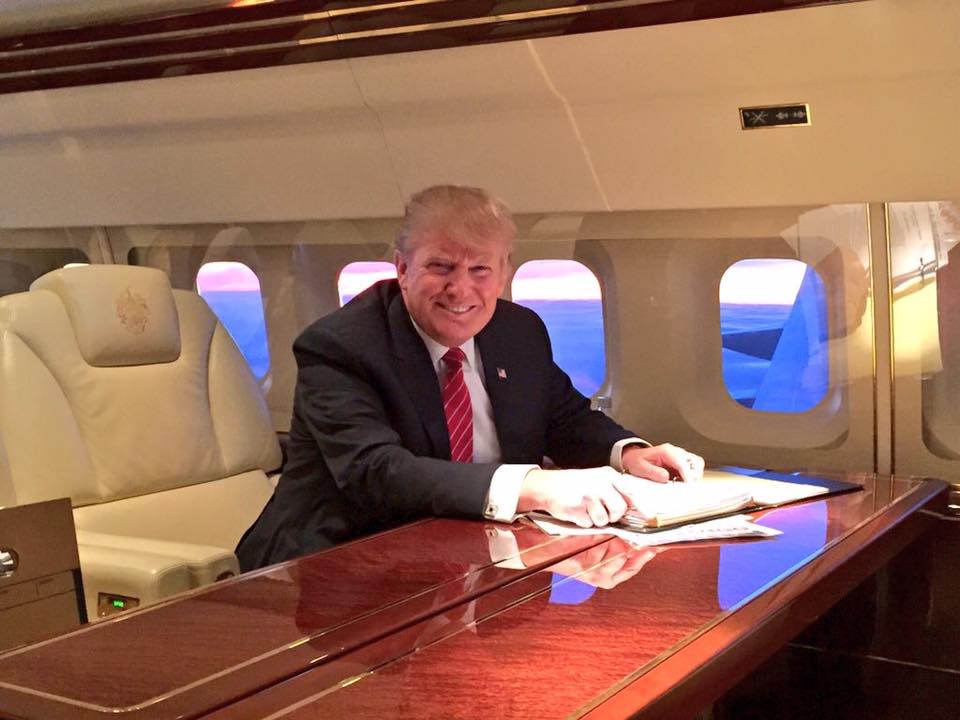 A rocky debate performance and a steady onslaught of negative attacks coming from his rivals – most notably former Florida governor Jeb Bush – have made nary a dent in Donald Trump‘s dominance in early-voting South Carolina.

Three new polls released this week show Trump with a huge (yuge?) advantage over the rest of the “Republican” field.

The first poll – by North Carolina-based Public Policy Polling (PPP) – has Trump at 35 percent, with Cruz and Rubio tied for second place at 18 percent support.  Kasich is in fourth place in that survey with 10 percent, ahead of Bush and retired neurosurgeon Ben Carson – who are tied at seven percent apiece.

PPP surveyed 897 likely GOP primary voters on Sunday and Monday, and its results have a margin of error of plus or minus 3.3 percent.  Not surprisingly, this Democratic-leaning firm leaked its results to The (Columbia, S.C.) State newspaper.

This poll’s margin of error is plus or minus 2.8 percent.

The third poll – an automated survey of 416 likely voters conducted by Crantford Research for The (Columbia, S.C.) Free Times – found Trump at 32 percent, Cruz at 16 percent, Rubio at 13 percent, Bush at 12 percent, Kasich at 9 percent and Carson at four percent.

This survey was also conducted on Sunday and has a margin of error of plus or minus 4.8 percentage points.

All three of these surveys reaffirm prior polling showing Trump rolling in South Carolina.

Well, with one exception … the poll released earlier this week by Right to Rise, the SuperPAC that’s pumped tens of millions of dollars into Bush’s bid.

Blast From The (Bush) Past

It’s over.Build the Wall and deport Rocky’s mother in law with the rest of the freeloading illegals/NON Citizens.

Build a wall around pogo’s trailer to save us from seeing that eyesore!

Awesome. Keep this trainwreck rolling as long as possible.

Which one?Hillary’s pending indictment or the Sanders Communist Express aka Stalin,Castro,Chavez,Noreiga and Obama?

A Democrat winning the Republican nomination will be priceless.

Better than a communist winning the Democrat nomination?

Wasn’t this site so pleasant while pogo was gone? Comes back shortly after this site gets attacked too…

It got attacked election night as well-2014.What a shame. :)Guess this site pisses a lot of people off-aren’t they being sued?

Give it a couple of hours. He will threaten a few posters with lawsuits, call everyone who disagrees with him a Communist, make yet another farewell speech & flounce off.

Couple more fundraisers in Florida today.Will check back in.

Hopefully Will investigates pogo, wonder if the attack actually originated in Ohio……

Do you really think flip is bright enough to manage something like that, though? You are giving him way too much credit.

He could be a script kiddy or know one…

A Democrat winning the Republican nomination will be priceless.

Yes you have the right of it. LMAO!!!

Whatever Trump puts in his hair, it sure is eating into his headrest.

I don’t believe Hillary or Bernie would pick Nikki as a running mate.

My source tell me Trump will.

Well, we know she would accept.

Hopefully he treats Nikki better than his ex wives…….

There was some unpleasantness, but I think they’re doing OK.

Like Bill treated Hillary?Or the way Bernie treated his ex-beating her and being a bum-never earning a check before 40 while writing articles on masterbation and pedophilia?

Don’t do coffee sorry. More of a tea person.

Sipping on tea while you suck the D… LMAO!!!

You should LOVE Cruz!

In his rant yesterday, he bashed her performance as a governor again. But he is going to ask her to be his VP?

Maybe you need some?

Americans want and need a President who cares about American citizens and not Wallstreet or the global elite or the corrupt Republican establishment!

Government made the internet, smart phones would suck without it. Government is not a job creator but it should protect the people from Wall Street and the elites, rather than doing their dirty work…

65% of value added to an iPhone is American. China 20%..
We’ll buy their underwear and non durable goods, if they keep buying our SC made BMW’s, Boeing planes, power plant generators.

Labor is more important to human development than value created by marketing and brand recognition. You are celebrating what is wrong with society.

I celebrate human ingenuity and creativity.

You are totally wrong. We invent things not to create work, but to reduce or eliminate it. If not for the products and services produced, there would be no reason for work.

But your also wrong about the IPhone. Most of the parts, the software, chips, and memory are made in the US. The touchscreen is made in Taiwan. There are other parts made in various places. All the mainland Chinese do is assemble it. The iPhone’s design, and manufacturing provides for more American wages than Chinese.

Trump’s talk about writing our trade laws would ruin the American worker, company and consumer.

Besides, the Chinese need human development too.

Wall street didn’t make any of those things either. Wall street and their global elite friends are just a bunch of bankers working full time to figure out to sponge all they can from the hardworking AMERICAN CITIZENS.

Give the American citizens their jobs back and they will make you all those products you love so much, and probably think up some new ones you will love even more!

Will probably work better if they are made here rather than China too!

Jobs are not going to be reconstituted back in the same mold as they left. The globalists, like a ego-maniacal Soros and his money, won’t let them. It’s the whole Fabian socialistic thinking of remaking the world while it is on fire to protect the oligarchy while soothing the serfs. Forget about self-determination.
You elect a Clinton, Rubio, Cruz, Sanders… we remain on the same track. Trump is bound to be a disappointment too. But, Trump has the interests of our country and and its’ success above those of globalism. You need someone who can partake of globalism’s attributes when it suits, without subsuming and sabotaging your sovereignty.

you should be giving credit to entreprenuers in China, Japan, South Korea, etc….because they are the people building you cars, tvs, and phones — not Wall street

i thought trump was running as a global elite, or are all the candidates flying around in their 100 million dollar private jets?

No, your obviously not paying attention.

You are hilarious. I hope Trump wins the nomination.

Trump all the way!

Donald Trump: “I Identify More as a Democrat”.

Trumpcare! Pro choice! How could he not be?

For all you guys who really hate Democrats, keep it up. If this guy gets the nomination, you’ll definitely have a Democrat in office again.

And it will probably be Hillary, and she will get to make the nomination for a justice instead of Obama. Republicans will deserve it even if we don’t.

Still hoping for Bernie though!!!

i hope Obama nominates a latino like from texas for the bench, then we can watch texas turn from red to blue as the republicans run him or her through the mill unfairly, they can’t help themselves, they will outrage every latino in the country.

You heard it here first.

If you want to be doubly wrong I’ll take that bet! LMAO!

I’m beginning to doubt whether politicians can be bought so easily. Trump has tried and failed so many times, he’s decided his only way to get what he wants is to buy the Presidency for himself. Maybe it’s cheaper.

Trump has a lock on the bigot vote. Had to laugh at the ones who wish the South had won the Civil War but are voting for a northeastern Yankee. New PPP poll-

Trump’s support in South Carolina is built on a base of voters among whom religious and racial intolerance pervades. Among the beliefs of his supporters:

-70% think the Confederate flag should still be flying over the State Capital, to only 20% who agree with it being taken down. In fact 38% of Trump voters say they wish the South had won the Civil War to only 24% glad the North won and 38% who aren’t sure. Overall just 36% of Republican primary voters in the state are glad the North emerged victorious to 30% for the South, but Trump’s the only one whose supporters actually wish the South had won.

-By an 80/9 spread, Trump voters support his proposed ban on Muslims entering the United States. In fact 31% would support a ban on homosexuals entering the United States as well, something no more than 17% of anyone else’s voters think is a good idea. There’s also 62/23 support among Trump voters for creating a national database of Muslims and 40/36 support for shutting down all the mosques in the United States, something no one else’s voters back. Only 44% of Trump voters think the practice of Islam should even be legal at all in the United States, to 33% who think it should be illegal. To put all the views toward Muslims in context though, 32% of Trump voters continue to believe the policy of Japanese internment during World War II was a good one, compared to only 33% who oppose it and 35% who have no opinion one way or another.

You accurately quoted PPP, and I tend to agree with it, but PPP is a left leaning organization. They won’t appreciate this poll being used to show that the other Republican candidates supporters are not bigots. Also, you never get polls about the bigotry of white Democrats. Many of these bigots are not tied to any party. They throw out David Beasley for Hodges and then throw Hodges out of office fot Sanford. PPP engages in confirmation bias. The polls are designed to confirm their already held beliefs. They won’t survey Democratic bigotry.
http://www.publicpolicypolling.com/main/2016/02/trump-clinton-still-have-big-sc-leads.html#more

The problem is that the PPP poll shows that Republican voters are intolerant in general — Trumps voters may be the worst of the bunch, but only Kasich had a clear majority of voters who oppose the Confederate flag (Carson comes in second, with 45% opposed — the rest all had majority (Cruz, Trump) or plurality (Rubio, Bush) support for the Confederate flag).

Regarding the bias shown by PPP….I’d have to agree somewhat. Democrats were asked none of the “bias” questions that GOP voters were… the closest the Democratic voters got to an “issue” question was barbecue sauce preference!

Edit follow up:
There is a “full results” link at the above web page. Nope, PPP only asked Republicans about the Confederacy, race, Islam and internment of the Japanese Americans. They asked the Democrats to choose between mustard, tomato, or vinegar, but not about race. Doesn’t that prove PPP bias.

You are a cynical, arrogant partisan prick.

I didn’t conduct the poll. So if you have issues with the results take it up with PPP.

Had to laugh at the ones who wish the South had won the Civil War but are voting for a northeastern Yankee.

We’ve taken the flag down and are supporting an obnoxious, loud Nyawker for POTUS.

Yet it’s not enough.

We should have killed all of you.

They shoot horses, don’t they?

I’ll just note that the poll which used over 1,200 participants was the only poll which uses the correct number of participants. Any poll of anything in SC cannot be accurate with only 416 participants. The square root of the base and the understanding of Chaos Theory precludes “tweeking” of any result. or twerking..

To protect you, this page or object has been blocked.

Same thing happened to me this morning. Alerted on the Medicaid Jesus blog.