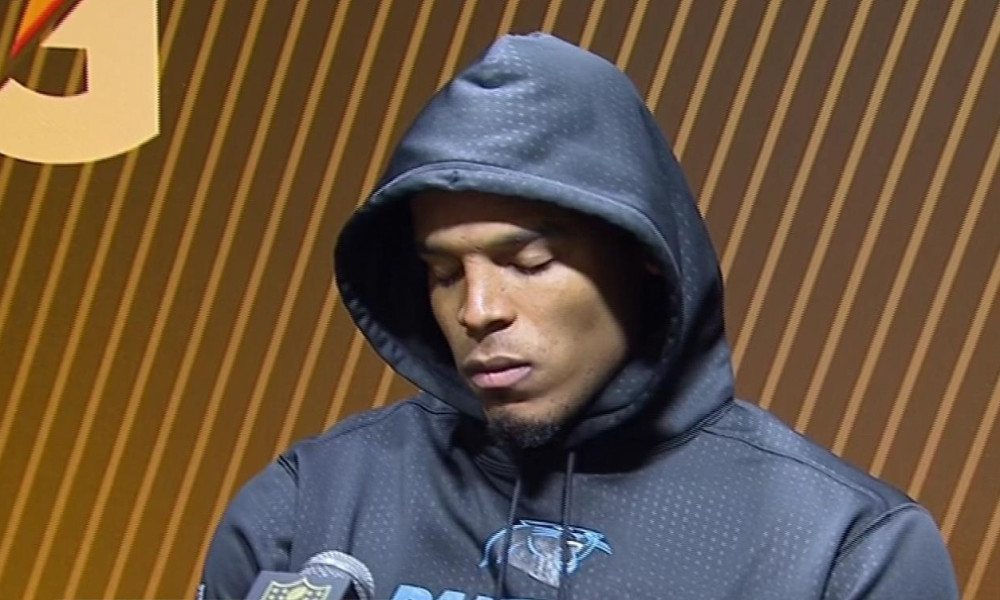 “MVP” EXPOSED ON AND OFF THE FIELD …

This website has never cared much for the Carolina Panthers. They are North Carolina’s team, as far as we’re concerned.  Similarly, we’ve never cared much for Cam Newton – whose 2010 national championship with the Auburn Tigers was tainted by allegations of payments made to his family.

Manning’s NFL-record setting 200th career win wasn’t his most prolific offensive game … in fact the Broncos set the Super Bowl record for fewest yards gained (194) in a winning effort.  Manning completed only 13 of 23 passes for 141 yards with no touchdowns and one interception.

But it was Newton’s implosion – on and off the field – that defined this game.

The brash 2015 NFL MVP – who had a career year in leading the Panthers onto the biggest stage in sports – was humbled in every sense of the word by the Broncos’ stultifying defense.  Denver sacked Newton six times for 68 lost yards.  They forced him to fumble twice – one that led to a defensive touchdown and another that set up the Broncos’ only offensive touchdown of the game.

Newton was also intercepted once – and finished the game completing just 18 of 41 passes for 265 yards (adding another 45 yards on six rushes).

Most damaging to his on-field reputation, he infamously opted against diving for one of his fumbled footballs – actually stepping away from the scrum.

Hurried and hit all game, Newton lost his cool in the waning moments of the fourth quarter when referees declined to call a roughing the passer penalty in the end zone following a bit hit.

After the game, things got worse …

Newton abruptly stormed out of his post-game interview after answering six questions with a total of eighteen words – giving his critics even more ammunition (although setting off a media frenzy to determine the “real reason” he walked out).

We get that Newton was disappointed.  Who wouldn’t be?  But professionals handle their business regardless.  They take ownership.  They lead.  Newton didn’t do that … on or off the field.

Had Denver lost this game – a distinct possibility at several points in the fourth quarter – we have no doubt Manning would have been a consummate professional about it.  He would have owned his mistakes – and as such, would not have had to rely on the media to come up with conspiracy theories to explain his petulance.

He would have handled his business …

While we will never cheer for the Panthers, there is much to like about Newton – potentially.  He’s got an infectious smile, his “dabs” and other post-touchdown moves tend to be genuine expressions of celebration (as opposed to taunting) and come on … who doesn’t like a guy who gives footballs to little kids?

Newton is also a truly electrifying talent … the sort of franchise player who will likely find himself on this stage again in the very near future.