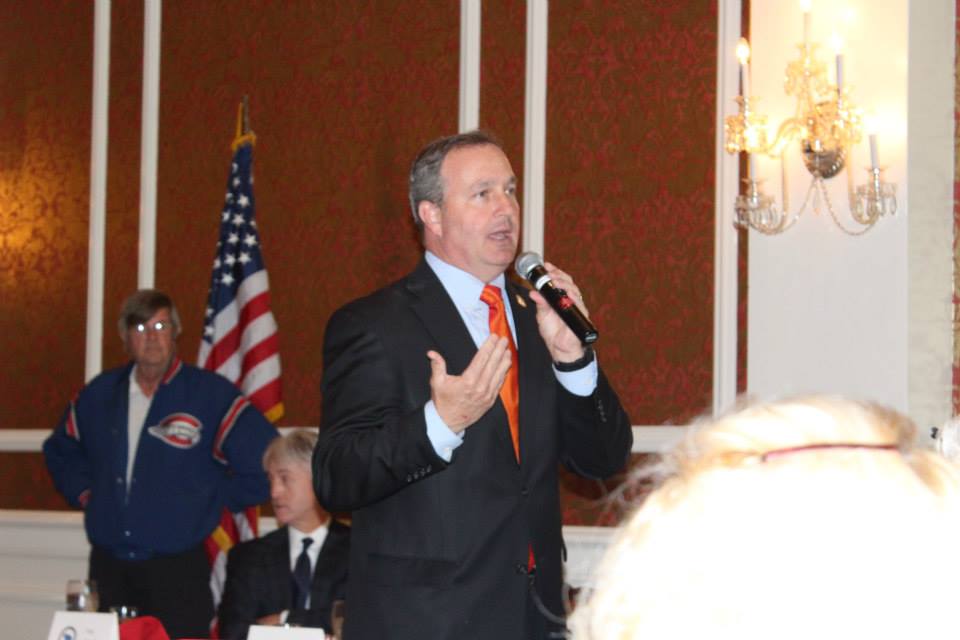 BIG “FIRST IN THE SOUTH” BOOST …

U.S. Senator Ted Cruz‘s “First in the South” campaign got a big boost this week when it received the endorsement of fiscal conservative champion Jeff Duncan.  Arguably the most consistent pro-freedom, pro-free market member of South Carolina’s entire congressional delegation, Duncan said Cruz was “a candidate who has a record that matches their rhetoric and a history of following through on their word.”

“Ted doesn’t just talk about the Constitution, he’s lived it and defended it tirelessly,” Duncan added.  “I believe Ted’s record sets him apart on this race and it is why I am proud to support him for President of the United States.”

Cruz hailed Duncan as “a tremendously important voice for freedom and a champion for conservative principles.”

“He has fought tirelessly to repeal Obamacare, to stop Obama’s lawlessness and to protect life and marriage,” Cruz said.

Obviously that last line is a nod to the contentious same-sex marriage debate that raged in the Palmetto State in the fall of 2014.

We disagreed with Cruz and Duncan on that issue – arguing government has no role in the marriage business to begin with (be it banning or sanctioning either gay, straight or plural marriage).

Still, Duncan has carved out an almost unimpeachable record on the fiscal issues – and liberty issues – that matter most to us.  And while we’ve already offered our own endorsement in the “First in the South” primary, his is a very credible endorsement.

Of interest?  Sources close to Duncan tell us he is very much considering a run for governor of South Carolina in 2018 – a prospect we speculated on previously.

We’ll be sure to keep our readers updated on his status … and other 2018 machinations.

“Big boost”? Only in your mind.

Part of the Upstate strategy.

Duncan swings a lot of weight in a 3.27 mile radius around Laurens.

The GOP is toast. I bet the establishment will just leave it to Cruz or Trump and regroup and start a new party. The Republican brand is damaged beyond repair.

Like the time he shit himself questioning why some federal security agency was equipped with M-16’s when just about every police department in the fucking country has the same weapon????
Yeah, Duncan’s my guy fer sure and I’ll take him at his word…just like he claimed to have “played” on the Clemson Football team when in reality he was virtually a human tackling dummy for the actual team……..

Maybe they could try to repeal the ACA for the twelve millionth time?

They have more important things to do, like smite the enemies of Israel in the name of Jesus. Once oil prices go back up, more wars will be imperative for economic security(lol) and then they can jump on that bandwagon too.

Right after taking care of ISIS of course.

Cruz is one sly double-talker.

I prefer the term wetback, thank you.

He’s so nasty we won’t even let him over to our half-hispanic house.

Hey! Cruz is a cuban/canadian son of an illegal alien communist soldier.
No need to be nasty.

“Gusano” (worm) is what Fidel calls them.

Or “Marielista” after he emptied his prisons and asylums onto the Mariel boat lift.

The only Rep from SC that is bought out, tells you something.

Guess depends who’s doing the buying. He’s only supporting Cruz because a majority of his supporters are supporting Cruz. He’s just workin’ it baby, so he can “slide in’ come November to another two-year stint with 4 day work weeks, only 30 weeks a year, with 5 months paid vacation.

Jeff, you just lost my vote in 2018. Cruz has been called out. Bad judgement on your part. At least Lance will keep his job.

Is that a recent picture of Jeff Duncan?
Has he lost 100lbs?
Did he go on the Paleo Diet or have surgery?
Is that Pinhead Gowdy behind him?

Have at it, but my ancestors and many of yours fought to take almost half of this country from those Spanish bastards. I will not vote to just hand it back. I can live with almost any Republican except Cruz and Rubio. if the party goes that way I will stay home.

Take back half of this country…WTF???
How can you take something back when you didn’t have it in the first place????
Those Spainish bastards had it first after they STOLE it from the Native Americans then by going to war with Mexico in the 1840’s (AFTER the Alamo) the United States gained the territory FROM the Mexicans via military defeat.

I did not say take back. I said take, and by take I mean liberate. Remember the Alamo, Remember the Maine. Don’t forget our ancestors who fought and died to liberate Texas and the American West from the Spanish. Don’t just hand it back.

Too late, gringo. You sad old crackers just don’t fuck enough. We, on the other hand, are like rabbits. The USA will have a latino majority in a couple of decades, probably less. Sorry, that just how history works. Don’t be so backwards.

But most of all don’t trust a Spanish politician who says he will do that.

Good luck finding a Spanish politician in the USA. In any case, it’s too late. We’re here, we’re Americans and we’re the fastest growing part of the population. Don’t worry, when your people become a minority, we won’t treat you as bad as you treat every other race. That’s what you are afraid of, isn’t it?

As I recall when the Spanish arrived in Central and South America the Native American population was about 200 million. They immediately enslaved them, forced them to convert to Catholicism, stole their wealth, infected them with disease, and slaughtered them by the thousands. By the beginning of the 18th Century their numbers were down to about 350,000. You can’t treat anyone worse than the Spanish did. Hispanics are their progeny in the new world. So why should I believe you?

If people with Spanish ancestry are one of your main worries in life, then you have it made.

Cruz is Canadian. Maybe he’ll burn down the White House?

Or take up hockey.

You understand the Labatt Blue commercials.

You dismiss all beers under 6% as “for children and the elderly.”

You have worn shorts and a parka at the same time

You owe more money on your snowmobile than on your car.

You think the start of deer season is a national holiday.

The trunk of your car doubles as a freezer.

Scientists at NASA have developed a gun built specifically to launch dead chickens at the
windshields of airliners, military jets and the space shuttle, all traveling at maximum velocity. The idea is to simulate the frequent incidents of collisions with airborne fowl to test the strength of the windshields.

Canadian engineers heard about the gun
and were eager to test it on the windshields of their new high speed trains. Arrangements were made, and when the gun was fired, the engineers stood shocked as the chicken hurtled out of the barrel, crashed into the shatterproof shield, smashed it to smithereens, crashed through the control console, snapped the engineer’s backrest in two and embedded itself in the back wall of the cabin.

Horrified Canadians sent NASA the disastrous results of the experiment, along with the designs of the windshield, and begged the U.S. scientists for suggestions. NASA’s response was just one sentence, “THAW THE
CHICKEN!”

Which is why we do not want a Canadian for President. Canadians are still British. That would be like handing the Country back to the British.

We don’t have to worry about that because Obama is suppose to crown himself King and turn us all into Muslims.

LMAO!! All hail King Obama! I’ll bow down and worship him any day of the week!

My first question was “who is Jeff Duncan”, then I seemed to recall a dude from Laurens by that name who had somehow managed to get himself elected to congress and then disappear for a year or two only to show up and ask for money and my vote again…

You mean Rafael Cruz? That would be Cuban-Canadian.

Bow-Chicka-wow-wow? I can always dream about the Mama Bare.

And the cucks just keep stepping out of the woodwork!

FitsNews likes Duncan?
Isn’t that sort of a kiss of death situation?

There is only one candidate that can Make America Great Again. Lead, follow or get out of the way. Trump 2016

I am ashamed that Duncan is my rep.

I wish he were my rep…

Cruz is a Canadian lying piece of Shit!