Ralph King “Tripp” Anderson, the chief judge of South Carolina’s administrative law court, has officially removed his name as a candidate for this week’s legislative election of a new justice for the S.C. Supreme Court.

Anderson did the same thing yesterday … only to reconsider his decision (redecide?), causing the mother of all clusterfucks at the S.C. State House.  And causing more than a few people to accuse this website of dirty dealing on behalf of one of the candidates in the race.

This time, though, there’s apparently no take backs … 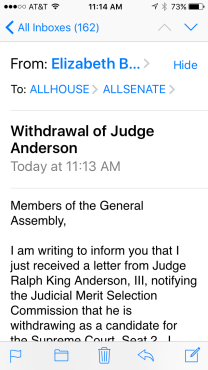 Anderson’s withdrawal means the race is down to a two-way battle between S.C. court of appeals chief judge John Few and Bruce Williams, another judge on the appeals court.

Who should win?  We have no dog in the fight … either judge would be fine with us (although some conservative lawmakers want to install Williams first and Few the following year).

Once again, the S.C. General Assembly has demonstrated its fundamental unfitness when it comes to electing judges – as they have in the past.  The inherent corruption of legislative judicial elections – which we have repeatedly exposed and repeatedly called for lawmakers to reform (along with the rest of the state’s notoriously corrupt judicial branch) – simply cannot be tolerated any longer.

Judges should either be popularly elected or (our preference) appointed by future governors with the advice and consent of the State Senate (or the S.C. General Assembly as a whole, we don’t really care).