S.C. Rep. Nathan Ballentine made the announcement over the holiday break.  He later appeared at a Rubio rally. 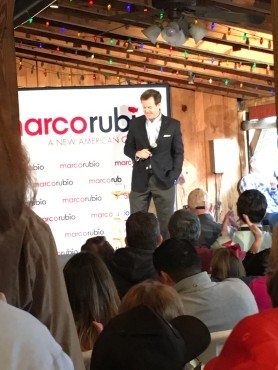 Perhaps … but perhaps not.

Also when you think about it, Haley really has nowhere else to go.  None of the other status quo “Republican” candidates are even remotely viable in South Carolina – making Rubio the equivalent of the last guy standing at the dance.

And the clock is ticking … Haley made her infamous 2012 endorsement in mid-December of 2011.  We’re already nearly a month past that mark in the current cycle.

Unlike 2012, Haley’s endorsement this go-round could provide a real boost to her candidate of choice.

When she endorsed Romney last cycle, Haley was at her nadir – polling at just over 52 percent among “Republican” voters.  Today, Haley’s GOP approval rating stands at 81 percent – meaning her nod in a “Republican” primary is no longer a “kiss of death” but a potentially game-changing positive.

Will that positive accrue to Romney? Errr … Rubio?

I’m going to start a PAC for all of them called “Cheaters United for a Better America”.

It might be difficult for them to find the people in Washington they couldn’t support.

Nikki’s probably waiting to see if Folks names her as Rubio’s mistress before she makes an endorsement.

I believe the truth is, she was. Or, why did a number of Legislators tell me about it in 2007?

Whoever she endorses, I will vote for someone else. I personally know her to be a pathological bald faced liar!

It’s so sad to see the corrupt goober politicians of this state given the slightest iota of power by having their “endorsement” mean something. It’s time that Iowa, NH and SC allow some other states to pick the candidates first. You know, states that aren’t completely subsidized by Federal Government largesse (no so much NH, but definitely SC and Iowa), and that are inhabited by citizens with a bit of common sense.

I thought I read somewhere that Rubio had said , if he were the nominee he would choose Nikki as VP. Yet another reason to MAKE AMERICA GREAT AGAIN.

I read the same thing and it was signed M. Rubio

If you stop by Hudson’s BBQ over in Lexington make a trip to the Boar Pit(men’s room), to find the message on the wall to the right of the handicap toilet when one is sitting at about 23 1/2 inches off the floor give or take an inch or two

Don’t bother calling any of the numbers, all of them answer- Hello, this is Michael

Funny, when she was running for Gov the first time (and I actually supported her, ashamed to admit) I went in Hudson’s one night to get a take-out plate. In came the two of them. Maybe I stared as I didn’t believe they were in there eating with common folks, but he kept watching me until they were seated. I was afraid I had stared and they thought I was a creeper but in retrospect, I now wonder if he thought I was their “third wheel” they were supposed to be meeting that night.

Um, where have you been? Nathan endorsed Rubio like two years ago.

Boeing owns Nikki & 40% of the Export-Import Bank corporate welfare goes to Boeing. She has no choice but to endorse whoever K Street, the RNC, & Chamber of Commerce tell her to.

Why of course, Marco—you’ve got my endorsement and you know I do so like to ah brag

Heck…South Carolina voters just loved getting back-stabbed which is why they elected…me !!!

Rubio as a first term senator has close to zero experience and is the least experience among the republican pack. I like a candidate to get significant experience and work their way up the ranks = just like any other profession- no free passes; that is democracy, equal opportunity. She could have chosen Bush or Kaysich both successful governors.Bush’s foes respect his success as governor, so why does experience not matter?.