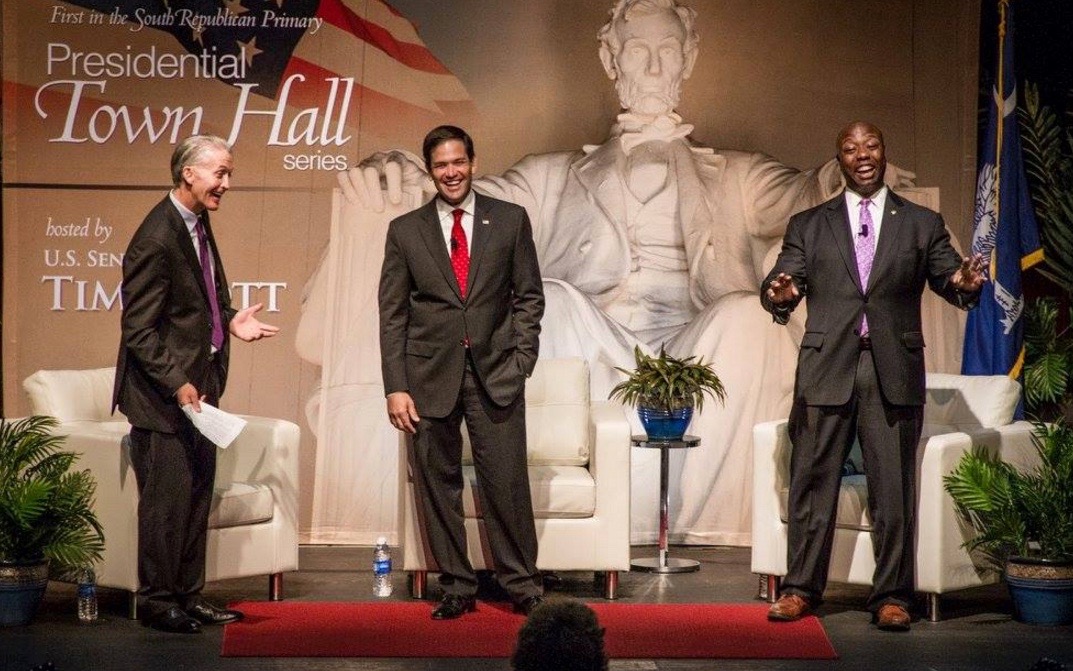 DRAMA IN THE “REPUBLICAN” ESTABLISHMENT

There’s an interesting column in Buzzfeed this week by reporter McKay Coppins seeking to revive a narrative that’s been pretty much dead during the 2016 election cycle.

Coppins’ column is all about South Carolina’s reputation for dirty politics – which has (so far) been flying under the radar in the run-up to February’s “First in the South” presidential primary election.  Specifically, his focus is on the various operatives working for (or in support of) the presidential campaign of U.S. Senator Marco Rubio of Florida.  Among them?  Warren Tompkins, Terry Sullivan and Wesley Donehue.

During the mid-2000s, these operatives combined to comprise the most potent political force in South Carolina – and in 2010 they appeared to have hitched their stars to the next governor of the Palmetto State, then-U.S. Rep. Gresham Barrett.  Appearances were deceiving, though.  Barrett’s gubernatorial bid was undone by the sudden rise of then-S.C. Rep. Nikki Haley – whose long shot campaign received a key financial boost from then-S.C. governor Mark Sanford.

As she rose in the polls, the knives came out for Haley … who at the time was campaigning as a Tea Party leader on her staunch fiscally conservative legislative record (yeah … how times have changed).

Specifically, Haley’s enemies seized upon … us.  Well, our founding editor Will Folks.

In May 2010, under intense pressure from pushy operatives and prying media, Folks confirmed what everyone in Palmetto political circles had known for years – that in early 2007 he had engaged in an “inappropriate physical relationship” with Haley.  He later provided text messages confirming the extent to which Haley’s political enemies – and the media – were pursuing the story.

This is where Coppins’ narrative picks up …

But while Folks got most of the blame — and attention— for the anti-Haley “smear” at the time, five South Carolina sources told BuzzFeed News that rival GOP operatives were aggressively circulating the rumors for weeks before the blogger went public. They said the driving force behind the gossip during that frenetic stage of the race was the Gresham Barrett campaign — where Sullivan was working as a consultant.

“There was no doubt among the political establishment in Columbia that the Barrett campaign — through Terry Sullivan’s witchcraft that he practices — was getting [the rumors] out,” said one former state party official.

Asked about these claims, Sullivan denied that there was ever a coordinated effort by the Barrett campaign to smear Haley. He conceded that their campaign spokesman, B.J. Bolling, was caught gossiping about the rumors off the record with politicos in the state — including at least one reporter — but Sullivan said he immediately benched the aide when he found out.

“I told him he would be fired if he discussed it with anyone else. … Not surprisingly, pretty much every reporter who called wanted to talk about it,” Sullivan said. “Everyone in the state was talking about it. But to my knowledge he never proactively discussed it with reporters. The campaign put him on paid leave and turned his duties over to someone else.”

(A former Barrett campaign official described Bolling’s efforts to disseminate the adultery rumors as somewhat more calculated, but added that Sullivan — who spent much of the 2010 election cycle consulting for a second, out-of-state campaign — was likely never looped in on those plans.)

What Coppins’ report neglected to mention (which is pretty curious considering how deep in the weeds he went on all this 2010 mudslinging) is that B.J. Boling (it’s spelled with one “L,” dude) was in a unique position to know about the Haley affar.

How come?  Easy: He worked for Haley while it was happening, and she reportedly confided in him about it.

Of course Coppins can’t even spell Boling’s name correctly, so we probably shouldn’t have expected him to make that sort of connection.

Anyway, here’s more from Coppins on Team Rubio’s connections to the 2010 “smear …”

Meanwhile, Donehue was more deliberate in his attempts to dig up dirt about the supposed Haley affair and hype his “findings” to reporters and GOP insiders, according to sources. He wasn’t working directly for the Barrett campaign, but he did work at Sullivan’s firm and he functioned like a super-charged volunteer for Haley’s opponent — working the phones, gathering intel, and dangling the latest rumors in front of other politicos.

Donehue admits now to “gossiping about the rumors,” but insists, “I certainly did not start them, or intentionally spread them.”

But in a series of text messages he exchanged with FITSNews’s Folks in May 2010 — days before the blogger published his allegation — Donehue seemed to suggest he had more control over the rumormongering than he now lets on.

In one of the messages (which were first published at FITSNews, and have since been authenticated by BuzzFeed News), Donehue wrote to Folks, “Here my promise to you, man to man. If you tell me that a story will fuck your marriage, I’ll do everything in my power to kill it.” In another, Donehue said, “I didn’t start this. I just told too many people that it was happening.” And in yet another, he boasted, “If I wanted [Haley] gone I would have already done it.”

“I was just trying to help,” Donehue says now of those texts. “But the truth is there was nothing I could do to kill the rumor because I wasn’t the one spreading it and I didn’t know who was.”

The text messages also feature an ongoing exchange between Folks and senior Haley adviser Tim Pearson from May 2010. At the time, Folks was still on good terms with Haley and appeared to be working with her aides to debunk the rumors. The messages clearly show that Haley’s camp believed that the strategists who now work for Rubio were fueling the infidelity rumors at the time — and the resulting contempt isn’t difficult to discern.

At one point, after Folks warned that Donehue was threatening to release evidence of the “affair,” Pearson replied, “Can you fuck donehue up?”

Obviously the most interesting part of this story isn’t the revival of rumors about Haley’s affair with Folks, it’s the box she finds herself in as the 2016 race unfolds.

South Carolina’s governor – who is enjoying a surge in popularity in recent months – has been on the leading edge of the GOP establishment’s attacks against Donald Trump.  She’d hoped to endorse the presidential bid of Wisconsin governor Scott Walker – but his campaign imploded.  Meanwhile the establishment’s top choice – former Florida governor Jeb Bush – also appears to be dead in the water.

That leaves Rubio as the only credible establishment option for Haley – who is eager to boost her national profile by playing kingmaker in South Carolina this election cycle.