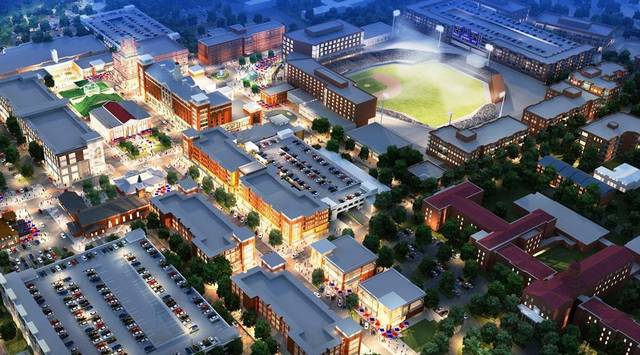 For years, this website has railed against the government-run Bull Street redevelopment in downtown Columbia, S.C. – a project pushed by corrupt city mayor Steve Benjamin.

This boondoggle – already set to deprive taxpayers of more than $70 million – represents everything that’s wrong with government, as not a penny of its massive price tag goes toward anything resembling a core function of government.

Exhibit A?  A government-subsidized baseball stadium that’s receiving $30 million of its $37 million price tag from taxpayers (all to host a friggin’ single-A farm team).

All while critical infrastructure gets short shrift …

Anyway, since the mainstream media in Columbia, S.C. is totally in the tank for this project – the only real coverage of its excesses has come from local alternative media.  In fact one of those outlets recently provided an update on its progress – and not surprisingly, it’s not good.

“While the ballpark is on schedule to open in April 2016, a visit to Bull Street Common makes it apparent that the stadium is well ahead of any other major development on the site,” reporter Chris Trainor of The (Columbia, S.C.) Free Times recently noted.

“More than a year ago, developer Bob Hughes said he had at least forty retail and business entities committed to locating on the Bull Street site,” Trainor added.  “However, as of December 7 those businesses had not been disclosed.”

Oh … and guess what else: Howard Duvall, a recently elected City of Columbia, S.C. councilman who campaigned as a fierce critic of this fleecing of the taxpayers, has apparently been co-opted by Hughes, the developer who is getting rich off of all this taxpayer-provided largesse.

After meeting with Hughes just days after his November election, Duvall now says he is “very impressed” with the developer’s vision.  In fact all of a sudden he’s become a leading proponent of the project.

Taxpayers in Columbia, S.C. literally don’t stand a chance.  What the Thugocracy wants, the Thugocracy takes.  Although sadly that’s not much different from state or federal government, is it?

The Bull St. project will fail miserably, just like the shitty single-A baseball team that’s in line to call it home.

I can see it now, stadium opens in April 2016, right smack dab in the middle of a massive construction zone. Rendering no other good reason to at the Bull Street development, other than to watch a baseball game. First impressions are EVERYTHING.

A tire store would do well there. Ya know, for all the baseball fans who get nails in their tires driving through the construction zones.

Not a bad idea, you would run that up the flagpole with Mayor T-bone Shitwater.

Why not? A city-owned and city-run tire store. The profits could help pay off the $70 million. ;-)

Rent-a-Rim is where the real money is in Columbia and Richland County.

This needs to be a used tire store. Who can afford new tires in Columbia? And why would you, when you’ll ruin them in a pothole on the way home.

We call him Mayor Shitwater for a varity of reasons. Welcome to the Third World, suckers.

Hmmmmm….” After meeting with Hughes just days after his November election, Duvall now says he is “very impressed” with the developer’s vision. In fact all of a sudden he’s become a leading proponent of the project….”

LOL…….After meeting with Wil Folks just days after Mrs Clinton’s November election, Folks now says he is “very impressed” with Hillary’s Oil vision. In fact all of a sudden he’s become a leading proponent of the Offshore Drilling project instead of a windfarm….

The 40 plus retailers that were mentioned before had only signed Letters of Intent. While normally promising indicators, they are not binding.

There is a office building going up now and an existing building will be renovated for office space too. Apartments have just been announced also.

This is going to take awhile to fully develope and the retail may wait until later.

It was not reasonable to expect it to pop up overnight, and the city and other principals should have made that known up front.

While it’s not surprising that things don’t just pop up out of the ground, seems as though the build out of the ball park and the retail space should have followed a similar timeline. We already had a ball field, that was already paid for, shoved off by itself on the other side of downtown, that barely drew a crowd. Without other retail, the flagship year of the Fireflies will be a turd.

We are pawns in the hands of New York slick, Mayor Ben.

Sadly, no one cares about the rampant unethical and illegal behavior in Columbia. They never have and they never will.

Move on. There is nothing to see and there will never be.

Oh yes they will. Property taxes on homes will skyrocket which in turn will tank the real estate market in the City of Columbia. Good luck with that!

A seventy million dollar stadium for a single A baseball team. That’s all we need to propel the city of Columbia into greatness.
With that much money floating around, it usually arouses the attention on the political sewer rats. And as usual, the same names keep popping up.
A shopping center of at least forty retail and business entities is planned. I am sure a shopping center in that section of town would be a hit. Remember, a minor league baseball schedule would probably run no more than four months. What will be the draw for the rest of the year?

How many of those businesses are something other than title loan/payday advance places, nail salons, fast food joints, convenience stores, red dot stores, and so on?

And some really thought Bull St. project would be any different than the old CCC prison project? Ha! Every development in Columbia is just plain and boring, and all seem to resemble prison buildings. Also, they always skimp on the parking, because prisoners don’t drive. Columbia – quite a funny place…

And the mentally ill go to prison…

I hear the Innovista Project is coming along nicely as well. Is all of the vacant office space still sitting empty or being used by USCe?

I had the misfortune of driving past the Bull Street paradise three times yesterday to and fro a client’s house in Cottontown and it still looks like the old mental hospital. The only difference I notice is the construction site where I assume the new temple of baseball is being built and some fancy signage out front with an artists rendition of the what shangri la will look like when completed. I will admit that the hotel that is supposed to be built in the old Mills Building is interesting. It might be an interesting place to stay and not sleep one night if it ever comes to fruition.

From “The State” newspaper: ” Robert Hughes said the Ensor Building, the old asylum morgue adjacent to the First Base Building and the ball park, will be converted into offices on the second story and a restaurant on the first floor.”

Read more here: http://www.thestate.com/news/business/article51729020.html#storylink=cpy
Do you really want to eat in a restaurant that used to house dead bodies? Is the sandwich of the day the Grave Digger?

The Bull Street/Columbia Commons development reaks of as much shit as all the Luxury student housing sprouting up all over Columbia that got half off of property taxes.

Kind of sick of greedy corporate moneyed interest sucking the soul out of us all.