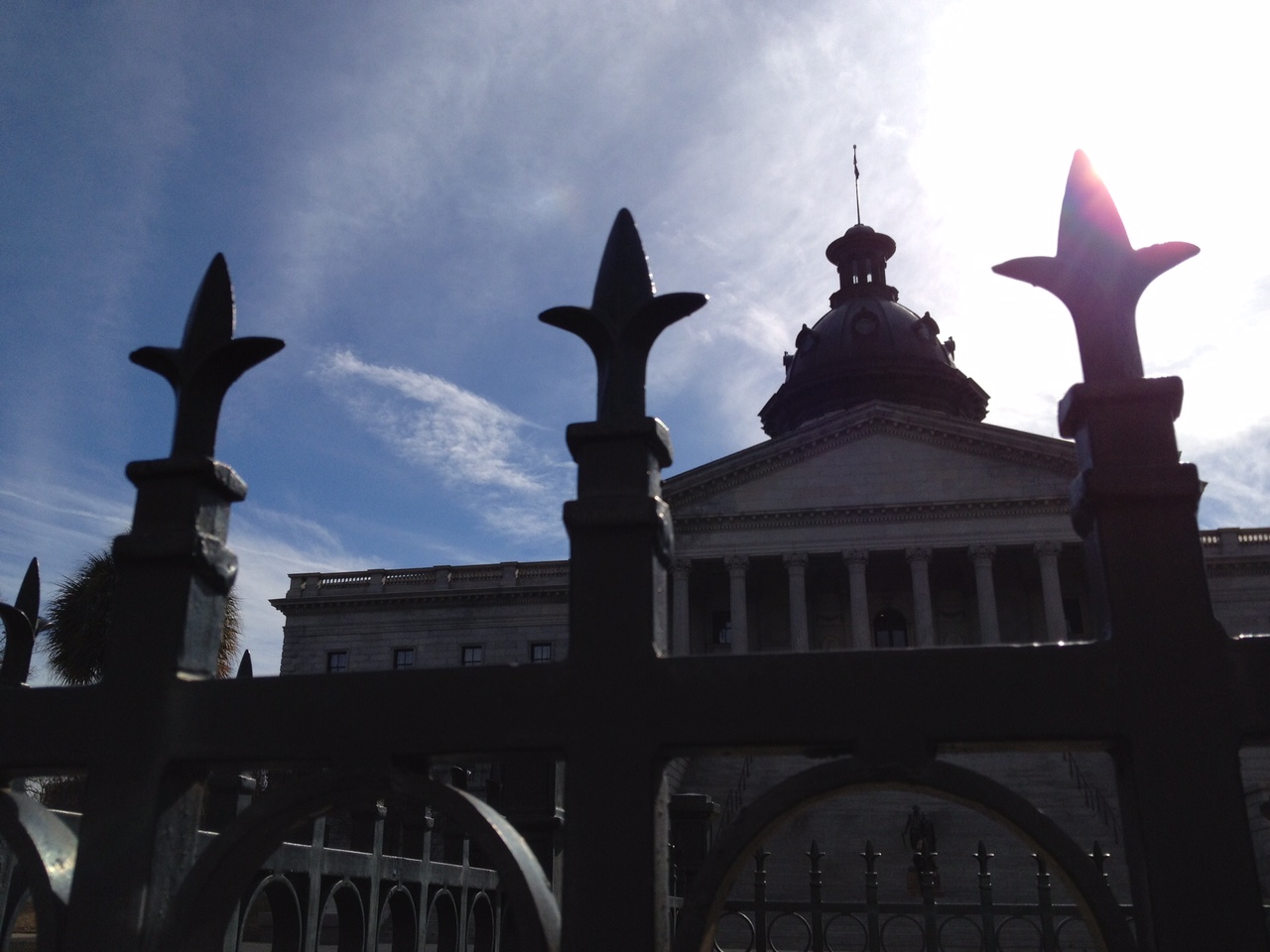 The South Carolina Secessionist Party (website here) has submitted a written request to the administration of governor Nikki Haley asking it to reconsider a recent decision revoking a permit for the group to gather on the grounds of the S.C. State House.

Haley’s Department of Public Safety (SCDPS) – in consultation with her bureaucratic agency – made the decision to revoke the group’s permit last week citing undisclosed safety concerns.

The party’s rally was scheduled to take place on December 20.

“If the state declines (the request), we’ve been encouraged to take legal action,” a source at the party told us.

“Haley’s denial of a permit for this event is an outrage,” we wrote last week.  “It is a prima facie violation of the First Amendment, and South Carolina taxpayers are likely going to be deprived of hundreds of thousands of dollars when this organization successfully brings a lawsuit against the state.”

As previously reported, Haley tried to put the kibosh on a Ku Klux Klan rally earlier this spring (one we later learned was organized by a government informant), but she wound up permitting the demonstration to take place.

She should have permitted this one to take place, too …

Again, it doesn’t matter whether you support or oppose secession (for the record, we’re open to the notion).  This isn’t about secession, it is about the First Amendment.

All groups have a right to be heard … it’s as simple as that.

I am glad Fits wrote about this.

BUT…now we get to see the outrage culture (on either side of the issue) go crazy. They go bonkers to make themselves feel better. To feel superior. But in reality, it is a juvenile desire to “matter.”

But you don’t. Just like this post doesn’t matter. No one changes their mind. no one is capable of changing their mind.

We are stuck. And that sucks.

What’s there to be outraged about? Some completely irrelevant goobers can’t have a pointless and poorly attended get together at the Statehouse. No big deal.

When I was growing up, I used to be very puzzled at why people did not fight for what they believe, for those things they claimed were worth fighting for. I am glad – knowing very well the ins and outs of these politics – to see that the Secessionist Party is fighting for their rights as American citizens. One of the primary individuals making threats is associated (at least in his own mind) with the New Black Panther Party and has called for the beheading of police officers. He has also used a lot of bandwidth defending Lautausha Nedd, who is currently on bail for calling for the killing of white people (she says she was provoked into it). The fact that ANY such persons should be able to stop South Carolinians (yes, we are in-state people) from exercising their civil rights to peaceably assemble is a DISGRACE – and Nikki Haley and her political ambitions are responsible.

Only way to get the flag back up.

Thanks for providing the perfect bad guys for me to vanquish. The nation loves when the child of immigrants makes good and stands up to the anti-American, racist good ol’ boys. My story will really resonate with a majority of voters around the nation. At least, the RNC thinks so. Cheers!

Yeah, immigrants who will not assimilate and become Americans are really popular right now, you betcha!!! It’s not about racism, it’s about LOVING THIS COUNTRY and leaving your ignorance about American history, including Lincoln’s War, and your self-promoting “diversity” liberal Marxism at the door.

How is wanting to break away from the USA “LOVING THIS COUNTRY”?
Anyways….keep it up. The more I smack you hicks down, the stronger I look to a majority of voters nationwide. It’s been surprisingly easy!

Simple. Secession was Southerners loving their country and its Constitution, as founded. If you knew and honored your history, you would know that.

DeoPatria (original comment) — Secessionist Party is fighting for their rights as American citizens.

I know the Union Army kicked the shit out of your traitorous ancestors and you’ve behaved ever since. Why have a gathering at the Statehouse to ram that point home to everyone who forgot or never cared?

Yep, that Confederate ex-pat colony established in Brazil after the fall of the Confederacy blossomed into a thriving world class state all its own===========NOT!!!!!!!!!!

You are an IDIOT and that is no Surprise so keep writing because we all need a Damn good Laugh! By the way, this Confederate Enjoyed your Ignorance

Breaking away from Great Britain in 1776 was wrong?

That’s right, folks—you actually heard Will say it—so now let’s be sure that you all do take a note

That long Tea Train WILL roll into the polls next year and hand the above AND Joe Wilson their… !!!

Is the Tea Train made up of a bunch of mobility scooters hitched together?
How do you guys decide who’s up front and who’s the caboose?

toot toot kept putting jane in his Cheroot and thinking RINOs are great
No doubt because they keep making YOU pay for his SNAP & Section 8 !!!

It’s usually the one with the best plumber’s butt that gets to be the caboose.

“Please my government master, PLEASE LET US PARADE AROUND AND WHINE ABOUT YOUR EXISTENCE!”

These people are just as entitled to their opinion as any one else. If they want to demonstrate on the state house yard they should be allowed to. What part of the first amendment don’t these politicians get ? The fate of the flag should have been voted on by the voters of SC. Nikki was told from on high (Rience Prebus ) (sp) to get the flag down one way or the other to ensure her a position in DC. Yet another reason to stop the establishment from messing with Trump.

They already tried this in the 1860’s. I guess they got beat so bad their ancestors are still suffering brain damage.

Pow said wow–not only did Lying-Joe Wilson rip the flag without voters having a vote
But he keeps sticking his head up Boehner and Ryan and always making Tea the goat
But then 2016 came and Joe was caught at his game like SC’s gutless legislators too
Joe AND Pow were the ones left with brain damage–ummmmm Haley…who knew ???

You are a Very Disrespectful Moron and God have Mercy on you. I know you are not a POW because they would not Disrespect Dead Veterans.

Did I hear something? Oh, just a Gnatt.

What does Haley care about spending state monies to lose a lawsuit so long as she scores some political points?

Priebus – anyone who’d listen to him on a local South Carolina issue is a fool.

Well said. I rest my case.

This isn’t about secession, it is about the First Amendment

Is the implication here that the secessionists plan on abolishing freedom of speech in any new government they form?

No. They might, however, acknowledge the merits of a system of government that has upheld those rights for so long and question the ability of South Carolina to do so on its own.

More generally the S.C. Secession Party should explain why they want secession in a formal declaration, because “When in the Course of human events, it becomes necessary for one people to dissolve the political bands which have connected them with another, and to assume among the powers of the earth, the separate and equal station to which the Laws of Nature and of Nature’s God entitle them, a decent respect to the opinions of mankind requires that they should declare the causes which impel them to the separation.”

That sounds familiar. It has a ring to it. Feel free to use it.

But maybe they’re working on it.

The document you cited above after all was written only after the idea of secession was bounced around the colonies for several years.

Could somebody from the SC Secession Party please comment if there’s a committee charged with documentation, and whether there are any drafts available for the public to take a look at?

Let these people have their rally, unceremoniously as possible. It is their Constitutional right to gather and have the rally.
The last thing people in this state need at the present time is to rile up this
group and having protests in the street. If you want them to gain some momentum and stretch this episode out in the printed press and over the air media, don’t allow them to rally.
Just for the sake of of getting this off the agenda, just let them do it. In the long run it will save time, money, and aggravation.

Good point… all 15-25 of them protesting, demonstrating, rallying – whatever…. is keeping me awake at night!!

Absolutely. The worst thing you can do is pick at a scab. As our mommas would say, “Leave that alone!”

Is this just the GOP establishment trying to avoid embarrassment in the run-up to the much touted “First in the South” Primary? Do they think they’re fooling anyone? They’re just trying to hide the rednecks.

The S. C. Secession Party website has a video of Ron Paul talking about the legality of secession. He also says that secession is inevitable when the dollar eventually crashes. The video appears to have been made at least by 11/23/2012. $1.03 now will buy what $1.00 would buy in 2012. A loss of 3%. This loss could have been recovered in an interest bearing account, MMA or CD.

At the time Texas was considering it’s own gold reserve as the first step in secession. It has since passed legislation in June of this year to transfer its gold from the Federal facility. If you would have bought gold at financial market price at the time of Paul’s video, not the mark up that always accompany radio and TV gold dealers, you would have lost 40% of its value as of today. In other words, $1.00 worth of gold in 2012 currency would be worth $0.60 in 2015 currency. So, in addition to the three percent loss in currency value, an additional 40% would have been lost.

If you would have invested in the index of major foreign currencies three years ago, you would have lost about 20% vs. the good old U.S. dollar. Significant losses for those reacting to Paul’s fears of 3 years ago by buying gold or other currencies.

I think it’s tricky to make money investing even if your long term analysis is 100% correct: “Markets can remain irrational a lot longer than you and I can remain solvent” according to Keynes. (And while social security might only go up 3% in 3 years i think the cost of items such as food and housing over that period have gone up much more. Not every statistician buys the government’s numbers.)

I think the Texas gold reserve is a matter of due diligence, not a short term investment. The East Asians are doing the same thing (accumulating gold).

China and Texas may be wrong, and maybe it is better to better to just let the feds and the big Eastern banks hold the reserves, but we’ll see! :)

I don’t believe China or Texas is wrong. They are not advising others, but Ron Paul might be wrong. I also fault him not just for his predictions, but the confidence in which he proclaims them.

“Irrational markets” is over used. It can always be used when someone has no explainion. It can also be used as an excuse when previous predictions fail.

I think you’re right that currency collapse does not necessarily lead to dissolution of a country — Argentina, for example.

I don’t think the Soviet Union broke up because its ideology was discredited — that’s a little bit loose, i think — but more because of natural fissures and imperial overreach.

But of course, imperial overreach was not unique to the Soviets.