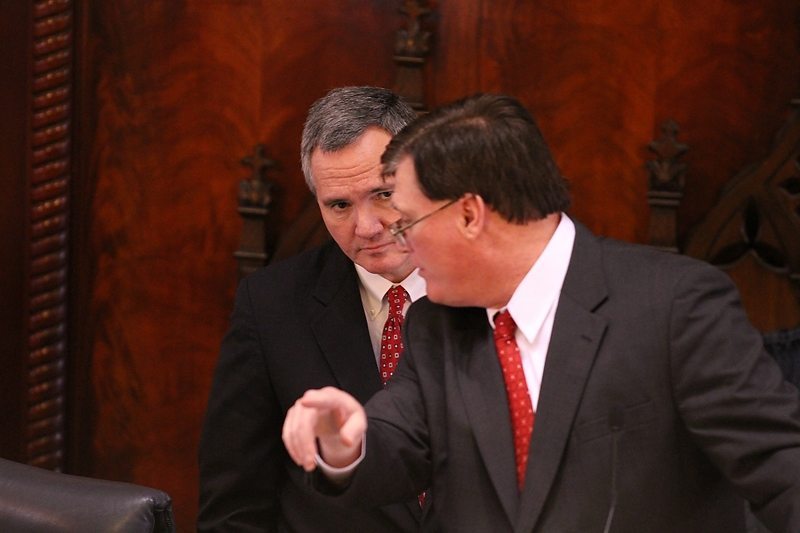 … AND THE CHALLENGES HE FACES

By FITSNEWS  ||  South Carolina lawmakers – a predominantly self-serving lot who have done their level best to run the Palmetto State into a ditch for decades – will gather in the state capital of Columbia this week for a biannual organizational session.

The purpose of this confab?  To select leaders, assign members to committees and prepare for the onrush of (mostly self-serving) legislation scheduled to make its way through the all-powerful legislative branch of state government beginning in January.

Hanging over this year’s gathering?  An ongoing federal-state investigation of corruption at the S.C. State House – one that’s already brought down former S.C. Speaker of the House Bobby Harrell.  In fact the first item of business when members of the S.C. House of Representatives convene in Columbia on Tuesday will be the election of Harrell’s replacement – a race that was won months ago by S.C. Speaker Pro Tempore Jay Lucas.

A 57-year-old attorney from Florence, S.C., the incoming Speaker is described by those who know him best as intelligent, inclusive and modest – three qualities in extremely short supply in the S.C. General Assembly.

“Jay is just what the situation requires,” one of Lucas’ colleagues told FITS.  “His personality, his integrity, his respect for the (House) – his way of doing things – it’s like he was custom made for the crisis we are confronting.”

It almost didn’t happen, though.  Lucas – who will be the third “Republican” to hold the powerful post since the GOP took control of the House in 1994 – was reportedly on the verge of leaving the legislature before circumstances thrust him into the limelight.

“He had a sweet job offer from one of the big firms but decided to stay because the Speaker’s job fell into his lap,” one source told FITS.

“I don’t see him doing (the Speaker’s job) for more than three terms,” one of the new Speaker’s confidantes told FITS.

That may be one reason why Lucas has been pushing for term limits on leadership positions within the House (not limits on how long members can serve, but rather the length of time they can occupy leadership roles).

We support such an effort …

Another of Lucas’ closest aides in the House told FITS his plan was to see the chamber through the current crisis, restore public confidence in the legislative branch and get the state on better fiscal footing.

“Not a caretaker – but not a career politician either,” the lawmaker told us.

When all that’s done, then he’ll take that private sector job …

“He’s well aware of the stakes,” the lawmaker added.  “He knows it’s all on his shoulders now.  And he knows he can’t do it alone.”

In an interview with S.C. Statehouse Report published just prior to the Thanksgiving holiday, Lucas told veteran Palmetto politico Andy Brack that promoting an inclusive style of leadership was “extremely important for where we are at this point in the state’s history.”

“I’ve heard from the members that they want to be involved in the process more than they have been in the past,” Lucas told Brack.

He’s involving them, too – appointing members like Gary Simrill and Kirkman Finlay to committees aimed at addressing pressing ethics and infrastructure issues.

Will his “inclusiveness” pay off in progress for the state?

If Lucas can steer the S.C. House out of its current corrupt mess via a package of compelling ethics reforms – while simultaneously righting the state’s fiscal ship with pro-free market tax and spending policies – that would be something all South Carolinians could applaud.