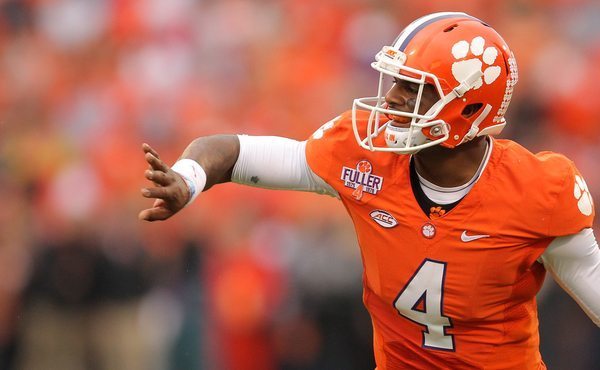 ABSOLUTELY … BUT SO DO HIS FELLOW FINALISTS

He is Clemson’s first-ever Heisman finalist for the coveted award.

Yes … although both Henry and McCaffrey make excellent cases to take home the trophy.

First, the numbers: Watson has thrown for 3,512 yards and thirty touchdowns this season – and rushed for another 887 yards and 11 scores.  The last player to eclipse 3,500 yards passing and 800 yards rushing?  Johnny Manziel – who won the Heisman in 2012.  Also Watson’s team is ranked No. 1 in the nation and is currently undefeated – something neither Henry nor McCaffrey can say.

“This could not have been done without my teammates and our coaches,” Watson said.  “This is a team award as much as anything.  Being undefeated and No. 1 ranked has everything to do with this.”

Watson also has wins over three teams ranked in the Top Ten of the College Football Playoff poll (Notre Dame, Florida State and North Carolina) – the only quarterback in America who can say that.

“This means a lot because I have come a long way from last year,” Watson said.  “A year ago on December 12, I was recovering from surgery.  I remember watching a story about Adrian Peterson and how he suffered a torn ACL but came back to become the MVP of the NFL that next year.  That inspired me to work hard on my rehab.”

Henry’s argument?  Well, the junior tailback broke the SEC’s single season rushing record with 1,986 yards – tops in the NCAA in 2015 – and scored 23 touchdowns for the Crimson Tide.  He also put up those gaudy digits against the best defenses in the country (while playing for an offensive unit with an anemic passing attack).  That strikes us as a far more impressive performance than the one put up six years ago by Mark Ingram, who captured Alabama’s first Heisman Trophy back in 2009.

McCaffrey?  All he did was amass 3,496 all-purpose yards this year, breaking Heisman winner Barry Sanders‘ 1988 NCAA record.  In other words, Stanford’s sophomore star has accomplished something no winner of this award has ever done.

The winner of the trophy will be announced on Saturday with ESPN beginning its coverage of the ceremony at 5:00 p.m. EST.  A total of 929 ballots are cast, including 58 by former winners of the award (including former University of South Carolina standout George Rogers, who won the award in 1980).

Of interest?  While no Clemson player has ever won the Heisman, the award’s namesake – John Heisman – coached the Tigers football team from 1900-03.  Also worth noting?  The player who posed for the now iconic trophy design – Ed Smith of the now-defunct New York University football team – never won the award.

So: Who do you think should win?  Vote in our poll and post your thoughts in our comments section below …

Teen Pregnancy On The Decline In SC

Before I hit the road for South Carolina/Florida….YES!!!!! A great season.Clemson would be 6-6 without him.

If OSU lost Elliot they would have still been 10-2.

if wishes were horses beggars would ride.

If MSU had 3/4ths its roster comatose in the hospital, the only thing that mattered were meaningless stats that Ohio State does better on and not scored points, and the game was 20 hours long, Ohio State would be undisputed national championships! LMAO!!!

You said something nice about a Clemson player. Did it hurt?

And he got snubbed even the invite. the next year Vince Young threw for 2500 and ran for 1000 and won it

Yep. Spiller’s snub bothered me more. He should’ve at least gotten an invite.

11 picks and barely winning his last two games (one against a reeling USC and the other only after questionable calls by the Refs) makes Watson a Heisman candidate?

Remove your garnet tinted glasses. Also get yourself a copy of the NCAA rule book. Check the section covering kickoffs, especially spacing and alignment.

Reviewed it, coached a little high school ball as well. The call was “offsides”, not “illegal formation”. The only people on this planet who think that was a good call have “traffic cone orange” as the predominant color in their closet. I was pulling for Clemson by the way.

Why did UNC losing come down to one play?

BTW – I saw a couple obvious holding calls by UNC during the game that weren’t called.

yeah, those two early horsecollar and facemask calls were bull too. both were barely noticeable and did not effect the tackling of the ball carrier. the horsecollar along with the other subsequent unsportsmanlike got Green ejected from the game. Several bad calls that night.

So you agree it was a penalty whether the infraction was correctly quoted or not? Then what does it matter. BTW had it not been called, UNCheat would have to score a TD and go for two and make it to tie not win.

No, it wan’t an infraction at all – bogus call. Would it have mattered? probably not, the point is that they shouldn’t have been at that point, the score should have been two touchdowns.

Check Watson’s stats against prior years winners–he bettered Jameis Winston (2013) in most of them.

He’ll probably win, but you’d have to go back fifteen years to find a QB winner with a worse interception record.

And yet he still went 13-0. Seems like even more of a reason he should win.

Yeah EnormaS, he didn’t choke on the big one like THE Ohio State.

That’s happened to me before…

don’t forget running game and that he is dual threat.

Padded numbers against Boston College, the #1 defense in the country. R I G H T …

Watson was on, Boston College’s mighty defense was off: 34-17. Rankings don’t mean doodle if you can’t win games.

Wasn’t targeting, wasn’t even close, the player was going after the ball.

Argue the off sides with the photographic evidence: http://s16.postimg.org/tha3pq6x1/onside.jpg

Read the part about player on the ground.

the refs didn’t miss the targeting on the kick off, it wasn’t. the UNC guy dove for the ball that the Clemson guy dropped before that. watch it again without your blinders on.

He might win it, but I would not want an angry Derrick Henry running at me.

Don’t know much about McCaffrey, but Henry is stiff competition. It should come down to Watson versus Henry, both are well recognized since their respective teams are in the final four. Probably a toss-up between the two.

I’m a Gamecock fan through and through, but I wish DeShawn the best in the Hiesmen race and Clemson the best in the CFB playoffs. DeShawn has some serious QB skills, can’t take that away from he. Clemson winning the CFB playoff doesn’t hurt the Gamecocks in anyway and it makes the state look good. You won’t hear me say this often by Go Tigers. College Football is very cyclical Clemson is up and the Gamecocks are down, the cycle will change as it does every year.

Give Watson the trophy and let it curse the Tigers in the playoffs. I was pulling for them when they won their title back in the Danny Ford days. But this Gamecock can’t abide them having two.
If Watson doesn’t get it this year he surely will next. He’s that good.

I would take any of the Three. I think Henry will make the best Pro which has nothing to do with the Heisman but there are no losers in this group of course Watson could make it also.

McCaffrey is the perhaps third best running back in the country and pretty far down the list of receivers. Yes he is a great player on a good team and he is a white guy, but the Heisman? Come on, man.
Henry is responsible for Alabama winning the SEC – Hunter Henry of Arkansas, that is. Derrick Henry is a one dimensional player who doesn’t have to think about anything on the field other than running straight ahead behind a line of Orcs who could make Nick Saban’s grandmother look like Hershel Walker. Where would Bama be without him? Still dominant.
Deshaun Watson – coming off a torn ACL – has made a mediocre team into a National
Championship contender. He has put his team on his back and single handedly won games. He has played his best football in the brightest spotlights under the most pressure. Where would Clemson be without him? 6-6? He is an Academic All American, and leader off the field.
He hasn’t raped anyone, stolen anything, sold autographs, taken money from agents, or yelled “Fuck her right in the pussy…”
And his mother doesn’t have a tongue. So there. He should be the clear winner.

hate the taters. but yes who else deserves it

I can think of one QB that shouldn’t get it.

He is very good, but not the best payer in football (at least not this year). He will and should finish 2nd. He never faced a really good defense. 11 interceptions plus a few fumbles is too many against who he played. He throws the deep ball better than anyone, and has great timing on other routes, but a bulk of his passing yards are screens and that sweep around to Scott that for some reason gets counted as a pass when its a hand off. Excellent player and perhaps next year but Henry will win it this year

FITSNEWS – Henry’s argument? Well, the junior tailback broke the SEC’s single season rushing record with 1,986 yards – tops in the NCAA in 2015 – and scored 23 touchdowns for the Crimson Tide. He also put up those gaudy digits against the best defenses in the country (while playing for an offensive unit with an anemic passing attack).

so BC and App At (I cant believe you would even try to count them)play no one all year and get to make it look like they have a good defense and GT runs the ball so much the other teams offense never gets on the field to try to get points. also much like a Clemson fan you only count it the way you want. Bama actually played 7 top 50 teams at the time they played the game much like Clemson tries to claim they beat three top 10 teams. if you take end of the year rankings Clemson didn’t they beat 1. you cant get it both ways so which way do you want it? That mean that really leaves Louisville, ND, and FSU who Watson didn’t do too much against and 2 of those only won because it was at home vs a back up QB but there the Wake Game!! Not even a close comparison. Again Watson is very good but he is not the best in college this year and wont win.

Also he is only using top 50 because it takes that long to give Clemsux an edge. 3-1 top ten for Bama and 4-4 top 25 who much is what most use to rate