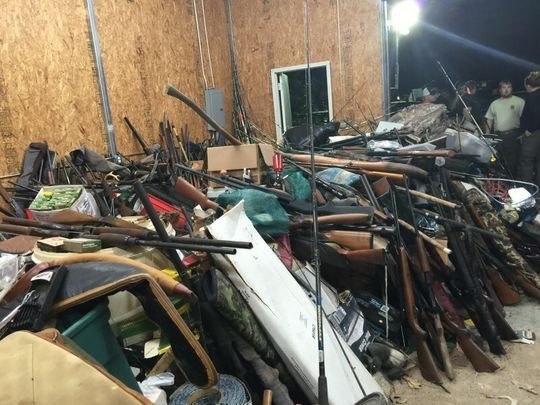 NOTHING IS ADDING UP …

Last month, Sheriff’s deputies in scandal-scarred Chesterfield County, S.C. made national news when they seized an estimated 10,000 guns from a residence near Pageland, S.C.

Working in concert with the agents of the S.C. State Law Enforcement Division (SLED) and the U.S. Bureau of Alcohol, Tobacco, Firearms and Explosives (ATF),  the lawmen claim to have descended on the property in response to a “tip.”

In the aftermath of the raid, Chesterfield County sheriff Jay Brooks announced the arrest of 51-year-old Brent Nicholson of Union County, N.C. for possession of stolen property.

Nicholson – who ran a liquor store in the area – had recently been arrested in North Carolina in connection with opium and heroin trafficking.

The drama went down on Friday, October 23.  On that date, according to one mainstream media news outlet, “deputies went to serve (Nicholson) with a subpoena.”  That’s when they claim to have “noticed what appeared to be stolen goods in his front yard.”

At this point, the cavalry was called in … with upwards of a hundred law enforcement personnel converging on the scene.

Police have hailed the gun bust as a major victory – not to mention a breakthrough in numerous other criminal cases.

“No telling how many break-ins this will help wrap up,” Brooks said at the time.

We’ve received troubling reports from sources close to the raid – and equally troubling silence from those involved in carrying it out.

Less than 24 hours after the Pageland raid went down, sources at the Chesterfield County Detention Center tell FITS something unusual happened.  Beginning on Saturday, October 24 a Chesterfield deputy sheriff reportedly “requested and received into his custody ten inmates.”

According to one of our sources, the inmates were provided to the sheriff “as labor for sorting and packing guns, ammo and other stolen items associated with the gun bust that is ongoing in Pageland.”

Hold up … is that legal?  No.  Not without a judge’s order, anyway.

In fact, FITS readers may recall the last Chesterfield County sheriff – Sam Parker – was indicted for using inmate labor for work on private property (news of which broke exclusively on this website).

Anyway, five of the ten inmates reportedly released to the sheriff in the Pageland gun case were convicted felons – yet they were alleged to have been permitted to “(handle) evidence including loaded and unloaded guns.”

Chesterfield’s jailer – Sheila Gillespie – was reportedly out of town at the time the inmates were released.  According to our sources, though, she raised holy hell about the situation upon her return.

“She was highly upset and let everyone involved know that this is an illegal act and was to stop immediately,” one of our sources noted.

According to our sources, Gillsepie notified both the S.C. attorney general’s office and SLED regarding her concerns over the inmate release – but received no response.

“So far, nothing has happened and it is being laughed off at the county level,” one source told us.

According to police, Miller repeatedly raped Melton in rural Chesterfield County prior to taking her into neighboring Kershaw County – specifically the Mount Pisgah, S.C. area.  There, beside an old abandoned chicken barn, he proceeded to beat her to death with a baseball bat – even as Melton pleaded with him to spare her life.

“If there ever was a death penalty case, this is one,” Kershaw County (S.C.) sheriff Jim Matthews said at the time, calling the crime scene the worst he had encountered in his many years of law enforcement.

But Miller didn’t get the justice he deserved.

Why not?  Because as we exclusively reported, prosecutors were forced to “abandon their pursuit of the death penalty in Miller’s case due to the possibility of ‘contaminated’ evidence” from Chesterfield County.

“The sheriff’s department allowed inmates access to crucial evidence and the defense attorneys leveraged this ‘mistake’ and negotiated a plea deal,” one of our sources noted. “Now, the biggest gun bust in South Carolina, and possibly the country, could face a possible similar result.”

The chance that improperly handled evidence could impact dozens (if not hundreds) of criminal cases isn’t the only curious development related to this gun bust.  According to our sources, the deputy who requested the inmate labor for the Pageland investigation – Rob Lee – is related to an employee in the local solicitor’s office (another local governmental entity whose former leader was undone by a scandal originating on this website).

That’s a clear conflict of interest.

Additionally, we’re told the case has led to renewed scrutiny of several previously dismissed charges that occurred while Lee – appointed in 2013 by governor Nikki Haley – was serving as Chesterfield’s acting sheriff.

“It has come to light that there is a lot more to the Pageland drug, guns and stolen goods case than meets the eye,” one of our sources noted. “There are previous cases against these same perps that were dismissed … (had) charges dropped or were otherwise settled which, in hindsight is more than a little suspicious.”

Additionally Lee’s wife was reportedly involved in at least two of those previous cases – adding fuel to the conflict-of-interest angle.

FITS has sought comment from Chesterfield officials, SLED and the attorney general’s office related to this story.  So far no one has commented.

Stay tuned … we plan on keeping our readers in the loop as we learn more about this brewing scandal.

UPDATE: A SLED spokesman has just issued the following statement in response to our inquiries.

“We did get a call from Sheila Gillespie last week. We contacted the Fourth Circuit Solicitor’s Office about the issue. Their office contacted the county administrator and Sheriff about the use of inmate labor. We were informed the matter is being handled administratively. The inmates were used to move all of the seized items and were under law enforcement supervision while moving the materials.”

UPDATE II: A spokesman for the attorney general just contacted us and provided the following statement.

“Our office has received a letter from Ms. Gillespie and we are reviewing it.”