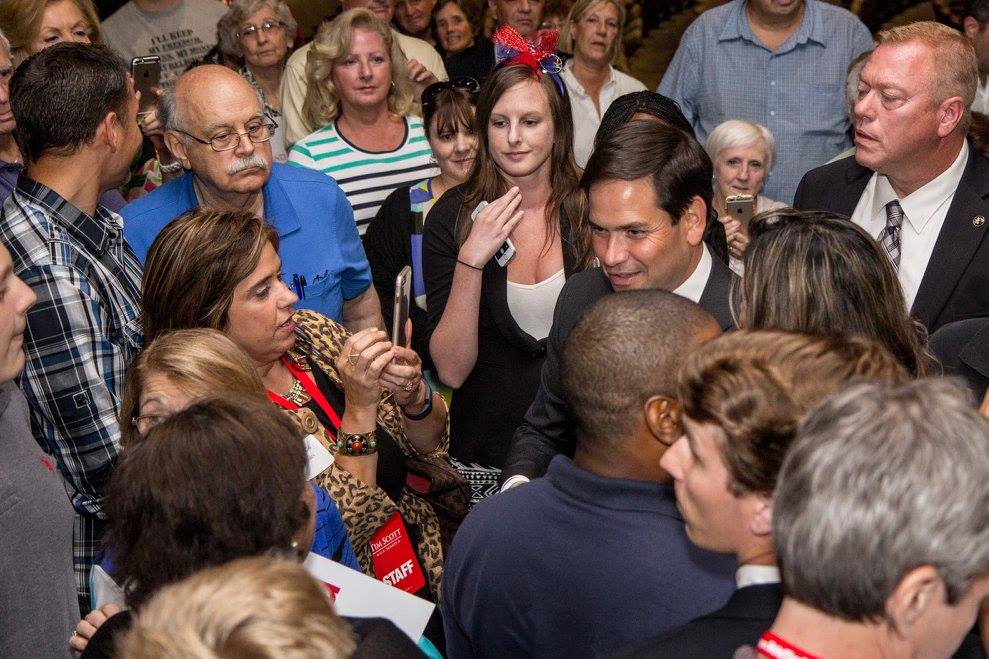 IS THIS THE GUY WE WANT MANAGING TRILLIONS OF DOLLARS IN SPENDING?

One of the most underreported stories related to the recent rise of U.S. Senator Marco Rubio of Florida involves his disastrous personal financial history.  GOP frontrunner Donald Trump has popped him on it, saying Rubio has a “very bad record” when it comes to managing money – and the narrative is expected to play an even bigger role in the 2016 campaign as Rubio enjoys a bump in the polls.

Can Rubio continue to sidestep the questions?  Or does this issue have the potential to blunt his momentum?

During the most recent “Republican” presidential debate – in which Rubio shone – he swatted away criticism of his poor personal fiscal record as “discredited attacks from Democrats and my political opponents.”

Rubio is vulnerable here … very vulnerable.  Well, assuming his GOP rivals figure out how to exploit the opening … which they have yet to do.

Much of the controversy centers around Rubio’s use of an American Express card provided by the “Republican” party of Florida during his tenure as the Sunshine State’s Speaker of the House.  During the late 2000s, Rubio put more than $100,000 on this account – routinely co-mingling personal and political expenses.

Defined by party officials as “a corporate card” meant to be used exclusively “for business expenses,” Rubio nonetheless charged all sorts of personal items on the card – including repairs to his family minivan, grocery and wine purchases and expenses related to a family reunion.

Rubio successfully defended himself against allegations that he spent party funds on personal expenses during his 2010 U.S. Senate race.

“Here’s what they don’t tell you, it’s my money,” he said at the time. “It’s a card that was secured under my credit and I made payments out of my own pockets directly to American Express. It’s ridiculous. It’s not true and it is being put in the worst possible way to divert attention from the central issues of this campaign.”

Okay … but is that true?

No.  PolitiFact has rated Rubio’s response “mostly false,” going into great detail as to how the $16,000 worth of reimbursements he paid into the account did not align with all of the personal expenses he put on the card.

“There’s little evidence that it was ‘his money,'” the website noted.

Complicating matters?  Many of the records related to the Florida GOP credit card scandal have yet to be released.  In fact Rubio refused to release several years of records during his 2010 U.S. Senate race.

Why was Rubio charging personal expenses on a party credit card?  Well, at the time he was still struggling financially – and in considerable debt.  It wasn’t until he broke onto the national stage as a Tea Party darling (and started writing books to capitalize on his fame) that Rubio achieved financial stability.

At every stage of his political evolution Rubio has been able to pivot away from those attacks, using his “I came from nothing” narrative to deflect criticism – all the while relying on the goodwill and understanding of millions of Americans who have also struggled with debt.

In fact Rubio’s deft deflection – on display during the last debate – has thus far kept the issue at bay.

“The image of Rubio as a poor money manager with massive debt isn’t as damaging as his opponents and the press might think,” noted Simon Maloy of Salon.  “Pretty much everyone in the country has trouble handling debt, and far too many people are carrying way too high a balance on their credit cards.”

“Framing it in these terms just allows Rubio to make the point that he’s not wealthy and he copes with the same financial difficulties as everyone else,” Maloy added.

Rubio’s real vulnerability – which has yet to be exploited – is that he should have never been given a political charge card in the first place.  And that even if he accepted the card, he never should have used it for personal expenses.

That’s the real scandal here: Not that Rubio’s incapable of managing his finances, but that he’s susceptible to corruption.  Or a “corruptible sneak,” according to Maloy.

Our beef with Rubio?  He’s not who he says he is.  He burst onto the scene as a limited government guy, but like so many of those swept into office in 2010 he’s since evolved into a status quo “Republican” hack.

“This website once viewed Rubio with tremendous promise, but by the time he got around to announcing his presidential bid back in April we were done with him,” we wrote recently.