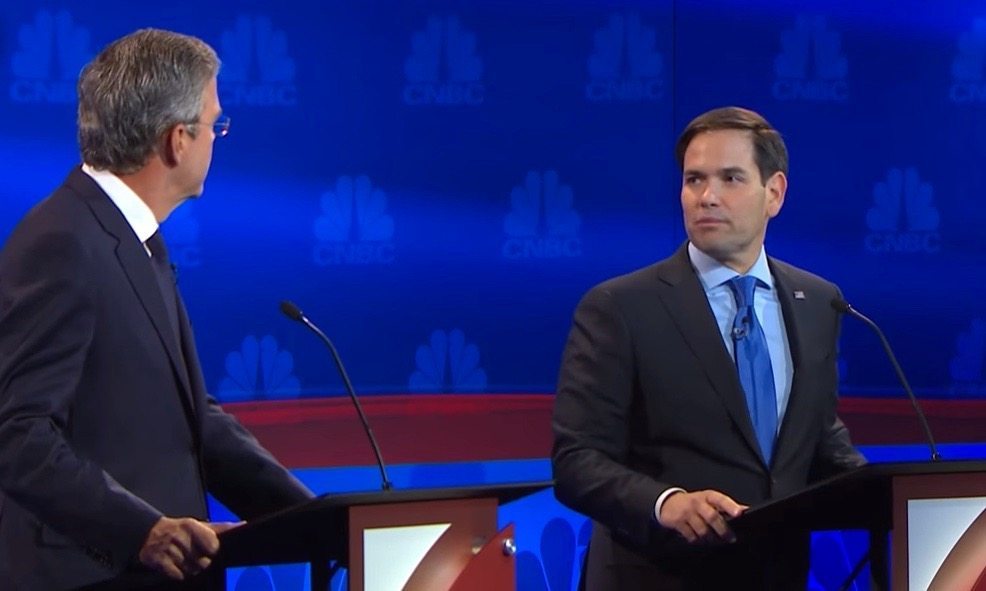 ESTABLISHMENT “REPUBLICANS” GO AFTER EACH OTHER

And judging by the reaction from the crowd – and the media – the pupil has become the teacher.

At issue?  Rubio’s failure to show up for work in Washington, D.C. – which was called out this week by a Florida paper that previously endorsed his candidacy for U.S. Senate.

“Marco, when you signed up for this, this was a six-year term, and you should be showing up to work,” Bush said. “I mean, literally, the Senate — what is it, like a French work week?  You get, like, three days where you have to show up?  You can campaign, or just resign and let someone else take the job.”

“I don’t remember you ever complaining about John McCain’s vote record,” Rubio responded. “The only reason why you’re doing it now is because we’re running for the same position, and someone has convinced you that attacking me is going to help you.”

As the crowd applauded him, Rubio then deftly pivoted to how his campaign was “about the future of America” and not about “attacking anyone else on this stage.”

Here’s the clip of Bush’s exchange with Rubio …

Not surprisingly, Rubio was heralded – and Bush harpooned – by the press.

“Rubio’s strong performance could prove to be devastating for his one-time mentor, Jeb Bush,” CNN’s MJ Lee reported.  “The former Florida governor and heir to a political dynasty came to Boulder badly in need of of a jolt to energize his stalled campaign.”

But “it was Rubio’s night,” Lee concluded.

“Bush launched a ponderous and predictable attack on Rubio, for his poor attendance record in the Senate,” The Economist observed. “Rubio responded with a put-down that was swift and deft—he noted that Bush never used to care about such things, and was pretending to now merely for political reasons.”

“It is hard to see him coming back into contention now,” the magazine editorialized of Bush.

“Rubio’s response was so effective – and the impact in putting Bush on his heels so immediate – that the senator’s spokesman triumphantly tweeted it out a full hour before the debate’s conclusion,” The Huffington Post‘s Scott Conroy and Sam Stein reported.  “And, in the moment, it was hard not to feel sympathy for Bush, his once promising campaign appearing to hit a new low in front of a live audience assumed to be in the tens of millions.”

“It was what the political pros call ‘a moment’ – something that lasts for more than one news cycle and helps define the event in the public consciousness – which is what all of the debaters are seeking,” John Cassidy of The New Yorker opined.  “In attacking his fellow Floridian, Bush was clearly looking for a moment to change the narrative of his sagging campaign. But because Rubio was sharper and better prepared – he had clearly come with the McCain answer in his pocket, in case Bush attacked him – the moment turned out to be his.”

Which raises the question … why did Bush’s team telegraph its line of attack against Rubio?

“Never mark your ambush with flashing lights and traffic cones,” one Florida politico told Buzzfeed‘s McKay Coppins.  “Everyone in Florida politics heard this attack was coming since the weekend, and Marco was absolutely ready for it.”

As pro-freedom, pro-free market fiscal conservatives, we have no use for either Bush or Rubio.  Both are pure GOP “establishment,” status quo politicians who would do absolutely nothing to reorient the trajectory of the federal government.

In fact as we noted in our earlier coverage of Rubio’s abysmal voting record, our beef isn’t with the votes he’s missed – it’s with many of the ones he has cast (including the deciding vote for U.S. president Barack Obama’s crony capitalist trade deal).

Perhaps if Bush would’ve fared better if he had blasted him on that rather than telegraphing his punch on the votes Rubio missed.

He couldn’t do that, though.  Like Rubio, Bush supports “Obamatrade.”

Thus far, yours is the smartest comment on this thread.

In the valley of the blind, the one-eyed man is king.

The only king we have, is Obama. Anointed and coronated based on bloodline, despite his miserable failure…

Or, for the Dems, apparently, the The One-Eyed Willie.

that little back a forth reminded of a fight i saw as a kid, one redneck busted a bottle of jack daniels over anothers head, then he just stood there looking at him, a second later he commenced to toting a severe ass cutting. jeb don’t just stand there.

Only you liberals give a FUCK about Bush…he’s your guy, and almost LAST among the Republicans…but Hillary is FIRST with you…LMAO…I LOVE it…

So true, Liberals everywhere are just clamoring for another Bush presidency.

We want your party to lose, AGAIN, ok? That’s all big TAR.

And you’re running Hillary to beat them???…LMAO…I’m not so sure the inner-city, multi-voters will bring home 120% vote totals Obama was able to steal…

Hill’s fake ans poorly-delivered Black accent may end up pissing off more people, than it convinces them to risk jail for her….

LMAO…FITS is trying to look at EVERYTHING but the Total Fucking ass-kicking, he, and the media, got last night…

Nobody gives a fuck about 2 Liberal-Tarians, who are non-factors…

You got the shit slapped out of you…FITSNews..and if the GOP can take the media down…we can get our country back..

THE WORST news FOR YOU…is that the Republicans seemed to have figured out WHO the enemy is…and it AIN’T each other…like you’re trying to peddle, as the liberal-ass-kissing Dumbass you are…LMAO…

Sucks to be YOU…

love your Christian words and thoughts….spoken like a true Baptist

You’re a pretty fucking self-righteous bastard, aren’t you? And a typical Liberal.

Anything goes if YOU are the perpetrator..but you don’t mind using a God, you hate and deny, to attack the people your fear…

Bush is done. Anything else from this point forward is a waste of time and money.

He was done 3 months ago. The only ones trying feverishly to resuscitate him are the FITS-like Liberal-Tarians…w/o him in the GOP…they have no one…

He was done when Dubya attacked the wrong country.

So is Hillary Done since Obama attacked America?

You should be happy he is the president !

Then you are Iranian, correct ?

Hittin’ the ole’ Wild Turkey a little early ain’t ya?

He is a wild turkey.

Rubio defense for not showing up to work – “Well John McCain missed more when he ran.” That debate was a joke. Nobody talked about anything, when someone tried to the others all slapped them, and then they all referred us to the .com page for their “plans.” I bet the ratings on this sucked. BTW – in 2008 – then-Senator Clinton, in the same time period, missed only 13% of the votes.

If you had half a brain you’d figure out that the GOP is now coming after the media. McCain and Romney, stupidly kissed your asses, like they thought you’d quit being NAZI-leftwing, and be fair…if they played along…

If we can take out (rise above the dirt of ) the media…we’ll obliterate you. If we cannot…our country will continue to head toward collapse. And when that happens…and there is no one to prop up the lazy, stupid, backward and ignorant, like you, you’ll begin to feed on yourselves.

When those of us who made it, for you to ruin – are finally marginalized completely..you’ll see what a Dumbass you are. You better hope Hillary loses…so we can fix the country for you to plunder the next time you can dupe enough idiots to empower you…

Coming afte the media – that’s great. Next week they can go tackle a mountain or swim a creek. You can join ’em Dumbass.

Attack whoever, whenever ! The GOP Proberly has a list from hell, LOL !

The GOP is just now coming after the media?

Please, for decades whenever a GOP empty suit couldn’t answer a question, they blamed the ‘liberal media’ for asking a question in the first place.

It is the most predictable and stale wingnut red-meat there is.

What you say has validity. BUT the fact is that last night’s “debate”, and the way it was conducted by CNBC, was the most blatant example of total liberal media bias in history.

There is no doubt that the whole thing was a set-up by those seeking to insure the coronation of Hillary Clinton.

Jeb needs to call it quits. He just doesn’t have what it takes to run for President. I get the feeling watching him that he was pushed into this campaign, like it is expected of by his family – otherwise he would happily be doing whatever it was before he declared.

Jeb Bush is the dumbest Bush, & that’s really saying something.

He couldn’t mount an effective attack on a kid that’s spent his entire life in politics, the very definition of an establishment player, who also couldn’t effectively manage his finances despite a life of working for government-

The biggest irony is that without Jeb’s support, Rubio might never have won his Senate seat in the first place.

Bush is over due to be over. Another turd down the drain.

Grasp the pebble from my hand

Neither Rubio nor Bush were in the “undercard” debate.

Rubio impressing me. I hope he’s the candidate.

Rubio was on the money !

Rubio is too short. Both in stature and experience. I don’t think the Repubs will nominate a first term Senator. Too reminiscent of Obama.

As given to me, the story goes that around 1915 in the heat of a debate Congressman Johnson of Indiana called an Illinois representative a jackass. The expression was
unparliamentary, and in retraction Johnson said: “While I withdraw the unfortunate word, Mr. Speaker, I must insist that the gentleman from Illinois is out of order.”

“How am I out of order?” yelled the man from Illinois.

“Probably a veterinary surgeon could tell you,” answered Johnson, and that was parliamentary enough to stay on the record.

Churchill has some great quotes made in Parliament.

Rubio is not deft. You cannot send a boy to do a man’s job. Do not let him blow Cuban cigar smoke up your ass. He’s a tinny empty pail. Hillary will annihilate him.