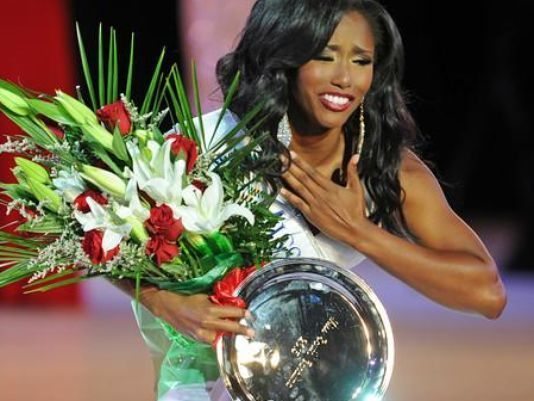 || By FITSNEWS || Gun grabbers are livid with Miss South Carolina Daja Dial for her response to a question about gun violence during this week’s Miss America pageant.

“America loves our Second Amendment, but gun violence continues to be a tragic problem,” Dial was asked.  “Do you support a ban on military-style assault weapons?”

“I don’t, but I think it’s because we need to increase education,” Dial said.  “If we teach people the right way to use guns, then we will reduce the risk of having gun-related accidents. It starts with education.”

“Dial chose to categorize acts of gun violence – like the June 17 massacre at the Mother Emanuel Church – as an ‘accident,'” Chris Haire of The (Charleston, S.C.) City Paper wrote, adding that Dial’s answer “belittle(d) the deaths of the Emanuel Nine.”

Guns did not cause the “Holy City Massacre” – which killed nine black parishioners at the Mother Emanuel AME church three months ago.  Nor did the Confederate flag.  Irrational hatred – born out of a lack of opportunity – was (is) the real killer.

Now, did Dial sidestep the question posed to her?  Sure.  She’s a pageant participant.  Canned answers is their modus operandi.  In fact the only place you’re going to get a less illuminating, more deflective answer to a question like that is if you were to ask it at a political debate.

The only difference?  Dial is not being asked to formulate domestic policy … she’s being judged on her looks. Her body. And her ability to carry a tune.

Seriously, what’s next: Are we going to start asking Toddlers and Tiaras participants what they think of the Iranian nuclear deal?

And then ripping them when they don’t answer to our satisfaction?

As for this website, we will continue to call out the uber-liberal “gun grabbers” while at the same time urging civil disobedience of any law (federal, state or local) which infringes upon the constitutionally guaranteed right to bear arms.

Southern Charm Star Kathryn Dennis Has A Christmas Gift For You …

“Leashed” Children: How Much Freedom Should We Give Our Kids?

Gorgeous women, good for her for being pro freedom. I’m sure that’s got to be difficult for her at times given black demographics in politics(left leaning).

Even if you don’t like her stance, you have to admire her fortitidue.

No, my guess is that he didn’t mean that at all. She obviously has the capacity to think for herself, something that has long been lacking not only amongst beauty pageant contestants, but also the general population. As I said earlier, I hope that Miss Dial goes far in life. Normally I would say she will but in our current society, having a functioning brain seems to be more of a handicap than an asset in some places, as evidenced by your comment.

Don’t worry, Libs have already stripped her of her race. The Left quickly accuses people of stereotyping even while declaring an entire race as monolithic. ?????

Dylan Roof did not use a military-style assault weapon. He did not purchase his gun legally and he chose a site where guns are banned.
Laws restrictions guns have totally failed in reducing gun violence, at least in the United States.

While I likely agree with your position, it is not a correct to claim that he did not purchase his gun “legally.”

As far as Roof’s procedural actions, he did everything legally. The misstep in the background check was not facially “illegal.” Thus, it is a moot counter-argument to bring up legality of existing regulations, etc.

He did break the law by not accurately answering question #11 on the Firearms transaction form.
https://www.atf.gov/file/61446/download

His answer to this question was not the proximate cause of his obtaining the weapon; procedural mistakes are to blame.

I think this was the same pageant where some other contestant was going off on Donald Trump. No matter what you think of Donald Trump, this is no venue to introduce or give opinions about politics.The people that run these pageants must keep their partisan politics out of the proceedings.
For God’s sake it ain’t nothing but a damn beauty pageant, not the United Nations.

Yeah right – I am outraged at what some beauty queen in a pageant had to say – you must really not have anything to write about these days.

Why isn’t he reporting on Obama’s takeover of Texas and his implementation of martial law?

Wow, teaching a psycho how to properly use guns is going to stop them from shooting up chuches, malls, and movie theaters. I wish I had thought of that.

Psychos are psychos, with or without education. The only thing that will stop churches, malls and movies theaters from being shot up is to stop making them gun free zones. When these psychos are forced to reckon with the probability that they will be met with force, they will most likely relent. Ever wonder why there’s never a mass shooting at a gun store? I’m sure you’re one of those scared of your own shadow types that just wants an all out ban of weapons, period.

This is why I stick with TV at home. Its bad enough there are psychos out there, but now you have ding dongs with cowboy fantasies packing heat thinking ‘they’ will be the one to stop some ‘bad guy’. The last place I want to be is in between a psycho and a unexperienced boob blasting away at each other. Fucking guns are a pain in the ass.

I think you mean “inexperienced boob”. Sounds like someone needs some of that education.

I know. Almost every day, the seemingly endless stories of innocents hit by gun fire from CWP holders and other good citizens who were defending against armed criminals is just horrifying. When will the carnage end? When will the blood stop flowing in the streets? When will we stop being th”Wild West”?

I thought you were talking about those toned arms. Love the shoulder bump! Extra sexy.

I wanted to hug Miss S.C. She gave a great answer and the libturds went bonkers. Love it.

Good for Miss Dial!!!! I hope she goes far in life.

Yes…b/c everyone really cares what beauty queens from S.C. have to say.