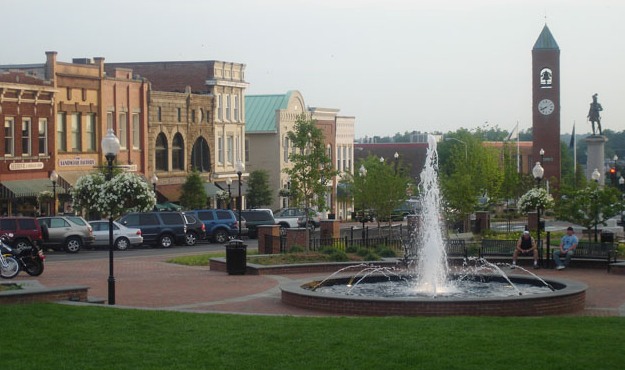 After the U.S. Supreme Court’s latest contortions in defense of Obamacare, why pass laws at all?

Anyway, South Carolina lawmakers passed a $26 billion budget this year … one which contained all sorts of provisos directing how certainly funds were to be spent.  The document is pure status quo perpetuation … different from prior budgets only in its growth from the previous year.

No state funds shall be expended to assist in the United States Refugee Resettlement Program unless the county council of the county where the resettlement is to occur approves the relocation.

For those of you who missed it, back in April this website blew the lid on a controversial refugee resettlement program in Spartanburg, S.C.  Under this scheme, the United Nations picks refugees for “resettlement” in the United States – a process paid for by U.S. taxpayers under the auspices of heavily subsidized (usually uber-liberal) nonprofits.

Many of these liberal groups masquerade as “Christian” charities, exploiting the social conservatives living in the Upstate region of the Palmetto State.

Oh … and speaking of exploitation, once federal tax dollars have paid for these resettlements (via the U.S. State Department), local governments are stuck with the costs of providing for these refugees.

We have consistently opposed the program – and increasingly, we’re not alone.

Unfortunately, the plan is supported by S.C. governor Nikki Haley – who is running it out of her scandal-scarred S.C. Department of Social Services (SCDSS).  In fact Haley not only supports the program, she’s reportedly authorized SCDSS to expand it in the coming fiscal year.

How is that possible, though? Has Spartanburg County approved the relocation?

No … in fact the local county council (membership/ email addresses here) has refused to take a vote on the matter.

Wait, though: According to the budget proviso, doesn’t that mean “no state funds shall be expended” in support of the program?

“State money is already being spent on the refugees being resettled in Spartanburg,” said Michelle Wiles, the activist who has filed a “cease and desist” letter with the U.S. State Department seeking to block the resettlement.

Wiles is working to get the Spartanburg County Council to take a vote on the proposed resettlement, but so far they have refused to do so.

In the meantime, State Department officials are arguing that any federal money passed through state agencies is not subject to the terms of the proviso – even though it’s part of the state budget.

“The state department said that no vote of the county council could stop the flow of money,” S.C. Rep. Donna Hicks said.

Hicks has been one of the few state lawmakers to sound the alarm about the costly obligations associated with the resettlement.  She’s frustrated with the lack of leadership at the local level.

“The county council doesn’t want to be responsible,” Hicks said.

As we’ve said from the beginning of this saga, we explicitly reject the use of tax dollars – especially those routed through liberal foundations – to impose long-term obligations on South Carolina taxpayers.  If faith-based organizations wish to host legal immigrants on their own dime, that’s great – but their activities cannot be subsidized by government revenue.  Nor can they be permitted to impose affirmative new obligations on already over-taxed citizens.

In addition to that, the rule of law matters.  Or at least it should.  State law forbids the implementation of this program without an affirmative vote of the county’s elected representatives.  Those representatives have refused to cast such a vote, meaning the program should be suspended until such time as they do.

The Jenny Horne Myth Lives On …

Making bank does. Refuges bring income streams from government and charity. It’s all about the Benjamins

Go get his ass in the race. His numbers will drop like a bad habit when he enters the race. If he gets in the race, the Democrats will become so fragmented that there will be a civil war within the party. That is, unless Hillary drops out, which it seems will not happen.
The DEMs, in one month will be in total disarray, with or without Hillary.

Another sell out by our elected officials. Ain’t government wonderful ???

Our government’s policies are responsible for this refugee crisis.
Thank Dick, George and their neo-con goons.

Refugees are just unintended consequences of American foreign policy, just several thousand people that were accidentally not taken out as collateral damage.

The refugee crisis did not start under the Bush administration and you know it. This refugee crisis began when Killary and Obama embarked on a policy to destabilize the middle east by pulling out of Iraq leaving it in chaos, enabling the shia-sunni wars to begin, as predicted and as everyone told him would happen. They used our weapons left behind against each other and the populace. Then he and Killary went on to destabilize Libya to use it as a conduit to transfer arms and money to so-called Syrian rebels so they could destabilize Syria, who later were revealed to be ISIS, which again everyone could see coming. They used our weapons against these people. Obama refuses to do anything about ISIS, says secular Assad is the enemy, yet backs Iran, the people behind Assad. After forcing the Muslim Brotherhood on Egypt, the Egyptian people rose up 30 million strong and arrested Morsi’s ass and he is in jail where he belongs, putting in place Al-Sisi, a good man whom Obama refuses to meet with, having preferred his hand picked Islamic fundamentalist-supremacists for Egypt, our former ally. Al-Sisi, who is forming an Arab coalition to take out ISIS and later Iran, when Obama’s actions engulf the entire region in WWIII. This refugee crisis is squarely on THIS administration. And the Iran Deal is squarely on him as well, history will not be kind, as it isn’t to Neville Chamberlain.

Excellent post though it may be wasted on these kool aid soaked Obamites. I don’t see the endgame yet, or it is so bad it defies logic.

Taking marching orders from the boss in the White House, no doubt.

Republicans are good at following their marching orders.
Please, keep electing them.

We actually love Obama’s policies, we support them more than our voters think. Please keep electing us!

They are pissing so many millions of Americans off, these fucktards in government are going to get a nasty war with the people. Haley will have to return to her home country … lol.

Haven’t these poor people been through enough?
Why subject them to a life in a dump like SC?

SC is just a stop to where they’re going.

In America they pass through poor states like South Carolina to get to rich ones like Texas.

Both of you are welcome to go with them…

I want to make sure there’s room for GrandTango. If he doesn’t show up you’re more than welcome to take his seat though.

Still licking Graham’s psychotic butt crack, I see. Graham has threatened to murder Trump. The man has gone off the deep end.

Already passed through SC. Enjoy your last in the nation lifestyle there in dumpy ol’ SC. At least the gas is cheap…too bad about the roads.

Have a good life! Don’t call, don’t come back ya hear…

They are only against brown people from the Middle East.
Let’s not pretend rule of law or whatever is involved in anyway.

You people have been intellectually denuded over the past few decades. Your mind can only run to one place when confronted with differing ideas.

If it constantly quacks like a racist, it must be a racist. At least own it, you two.

You proved my point, you are a one note song. If you were not accusing people of racism, you would have no comments at all.
Try another shtick, the racism chant is old.
You are obsessed with race, you brought up “Brown People, not me, never entered my mind. You are just advertising yourself as a compassionate, kind , caring person, while coming across as the biggest bigot in town.
Go get a life and/or grow up.

This site has already admitted it doesn’t care for home rule and that the ends justify the means when it comes to taxing and spending. Anything that results in lower taxes must be good no matter what the consequences of it are or how hypocritical it is in the end.

Hispanics have to go. They’re the reason we lost in Iraq. Private Martinez – you know who you are.

Give me your tired, your poor, Your huddled masses
yearning to breathe free, The wretched refuse of your teeming shore.
Send these, the homeless, tempest-tossed to me, I lift my lamp beside
the golden door!

File criminal complaints against Haley for Misconduct in Office then go to a State Magistrate to get a warrant for her arrest.

10,000 (Plus) Syrians coming to the USA early next year. Obama is flying them in. Hundreds of them will be resettled in South Carolina. What are you going to do about that? Cry and kick your feet? Or are you going to show these rogues in government who really has the power?

This refugee resettlement program is coming soon to a neighborhood near you. You will wake up one morning, and it will be like a blessing from Allah, new neighbors that you had no idea that they were coming. They will be subverting state and local laws to accomplish their mission.
Can’t we send them all to the West Coast, or maybe just not take them? It is a cruel world and we, as a nation, can not right every wrong in the world. Self-determination can work if people would overthrow a few despots in the world. Freedom ain’t free or cheap, unless you can just simply move some place else.

Why is it that the pics never show Wild Wings Café or Delanie’s Pub???
Best part of that street is up the hill about 50 yards……
Plus – “ol Daniel Morgan has been moved so many times he has a travel voucher 3 pages long!!!!!!!!

Come on folks, don’t you understand? The leadership in Spartanburg has to concentrate on getting those high quality minimum wage jobs for their needy constituents. They ain’t got time to worthy about no refugees. Hell, Jeff Horton (county council chairman) has a hard enough time keeping his hairpiece coiffed properly. The city leaders are too busy turning downtown into an amusement park. After all, they do have a new putt putt course on Main Street to operate.

We are on the York County council like flies on . . . something smelly. Thanks for the additional ammo, Fits!