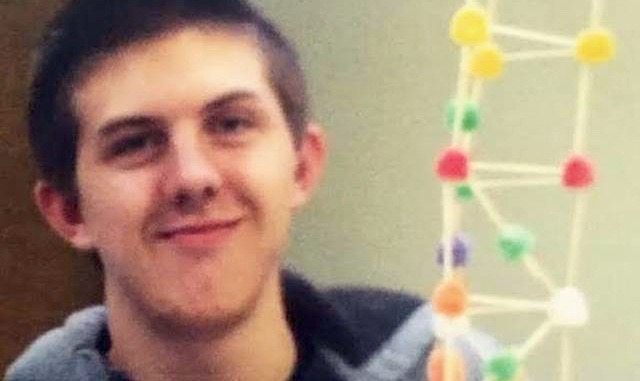 “WAR ON DRUGS” CLAIMS ANOTHER VICTIM …

|| By FITSNEWS || Zachary Hammond was shot and killed last Sunday night (July 26) by a police officer in the Hardee’s parking lot in Seneca, S.C.

Of course you wouldn’t have known that from reading the original police report regarding the incident … which failed to mention the shooting.

Local authorities still won’t say exactly how the fatal incident went down … and the county coroner isn’t talking, either.

Oh … and because the victim is white, there’s been zero national outcry.  No rioting.  No demands for “justice.” No social media hashtags saying #WhiteLivesMatter.

Ready for the most unbelievable part of the story?

The whole thing went down over a bag of weed …

Hammond, 19, was shot twice in the upper torso by the as-yet-unidentified officer – who was at the fast food restaurant in an effort to entrap 23-year-old Tori Dianna Morton in a marijuana deal.  Morton was in the passenger seat of Hammond’s car when he was shot at around 8:26 p.m. EDT.  She’d been lured to the parking lot in question by the officer – who was trying to arrest her for marijuana possession.

He approached the car with his weapon drawn.

According to Eric Bland – an attorney for the Hammond family – the officer’s first shot entered Hammond’s body around the left rear shoulder, forcing his body forward.  The second shot entered from the rear of his left side – piercing his heart and lungs before exiting from the lower front of his right side.

“It is clearly, clearly from the back,” Bland told The Greenville News, citing autopsy photos. “It is physically impossible for him to be trying to flee or run over the officer that shot him.”

Seneca police dispute Bland’s contention that the shots came from behind.  According to local police chief John Covington, Hammond tried to run over the undercover officer over with his car.

Covington says the fatal shots did not come from the front.

That’s impossible, according to Bland.

“The shots were so close in proximity to each other that it would be physically impossible unless the car was stopped and the officer came up very close to an open window,” Bland told the News. “Picture a car going twenty miles an hour and I’m fortunate enough to get a shot off, and I hit you —there’s no way I can get the second shot if the car’s going twenty miles an hour.”

Hammond is white.  He was unarmed at the time of the shooting.  He had no prior arrests.  The officer who shot him is also reportedly white, although that’s the only information that’s been made public about him.

“We feel that releasing his name may possibly subject the officer and family to harassment, intimidation or abuse,” Covington said in a statement.

What’s also not being released?  The coroner’s assessment of Hammond’s wounds.  So far all he’s saying is Hammond died of a gunshot wound to the torso.  He’s refused to provide any information regarding the direction of the wounds.

Oh, and if you’re thinking this senseless violence was part of some major, ongoing investigation into drug use in the area … think again.

“This investigation was not a long-term one and the situation just arose (Sunday) early afternoon by way of a confidential informant through our narcotics division,” Covington told The (Anderson, S.C) Independent-Mail.

A cop was attempting to entrap a 23-year-old woman in a hastily arranged, small-time marijuana deal.  That deal ended with a 19-year-old getting shot twice – allegedly in the back.  But police didn’t mention the shooting in the incident report, won’t release the officer’s name and have so far refused to provide any information on the fatal wounds suffered by the victim.

Again … all over a bag of weed.

This website has repeatedly written in opposition to government’s “War on Drugs,” arguing it is an unconstitutional infringement on individual liberty … to say nothing of a costly, colossal failure.

Zachary Hammond just paid for that failure with his life.  But because he’s a white kid getting shot by the cops, no one cares.

UPDATE: Well, someone cares.  The story is now on CNN.