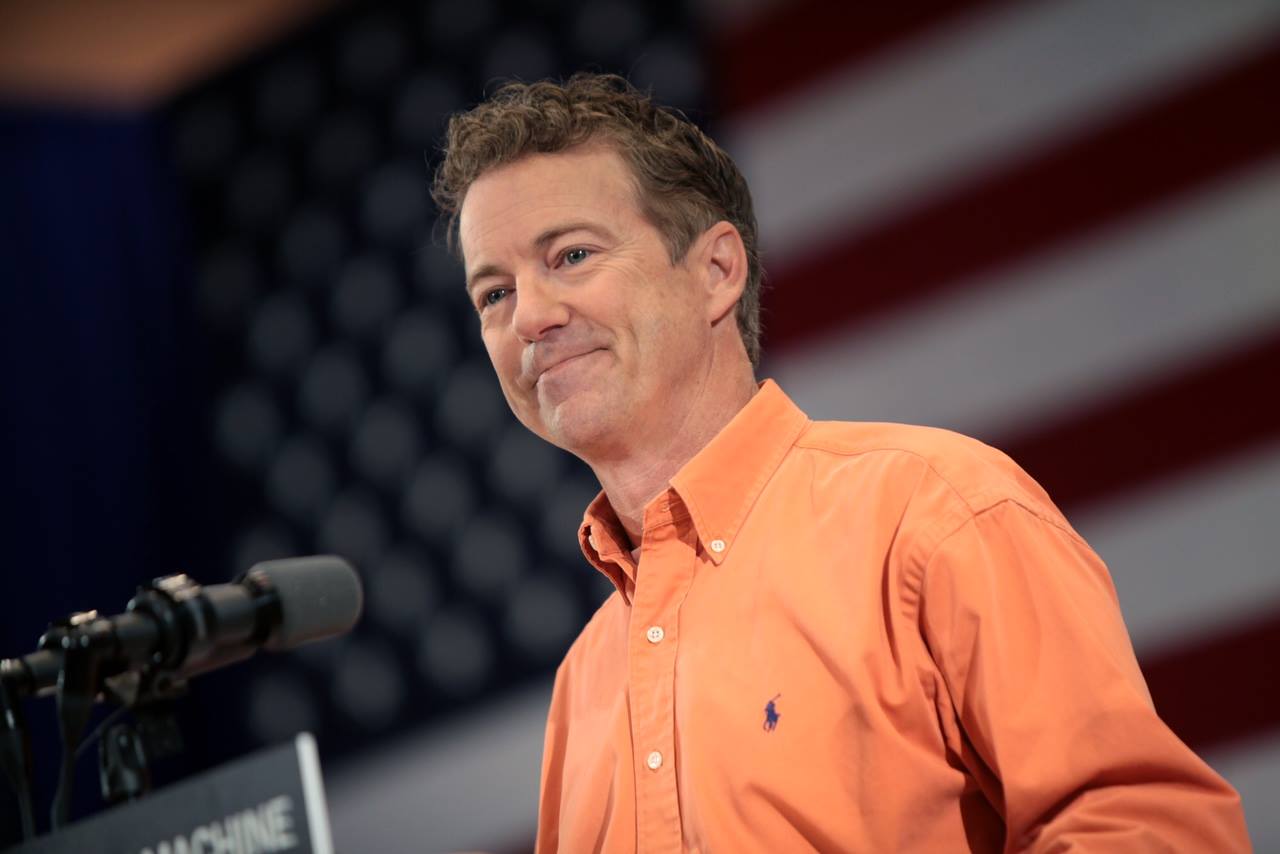 IS THE MOST ELECTABLE “REPUBLICAN” TRAPPED BY HIS OWN PARTY?

|| By FITSNEWS || Of all the candidates seeking the 2016 presidential nomination, this website was most optimistic about the candidacy of U.S. Senator Rand Paul.

That’s probably not surprising seeing as we endorsed his father’s 2012 bid.  And have written in generally favorable terms about his career in the U.S. Senate.

Paul’s campaign has been a mixed bag in our opinion … doing pretty well on the fiscal front, status quo-ing on the liberty front and taking major steps in the wrong direction when it comes to foreign policy.

We haven’t written much about Paul in recent weeks, though … nor, apparently, has anybody.

In fact there’s actually a story in MSNBC (one of the farthest left-leaning outlets, admittedly) joking about whether Paul had gone into the federal witness protection program.

I like tortoise-hare analogies as much as the next guy, but some basic truths are unavoidable: at this stage in the race, Paul’s support in the polls is underwhelming; his fundraising is unimpressive; his endorsement total is anemic; and his ability to generate attention isn’t working. Against this backdrop, the senator’s aides can say everything is going according to plan, but it’s a little hard to believe.

In case it’s not obvious, there’s plenty of time for any candidate, including Paul, to make significant gains between now and the early nominating contests. To simply assume the Kentucky Republican is finished is a mistake – it’s only July.

But Sam Youngman’s piece touched on an important point: “On issues such as gay marriage, the Confederate flag and the mind-blowing candidacy of Donald Trump, Paul is favoring caution over daring, seemingly all too aware that what he says to win independents could cost him with Republican primary voters.”

Benen is clearly urging Paul to make noise by running to the left on gay marriage and the flag – and clamoring for him to attack surprise GOP frontrunner Donald Trump.

But doing those things would make him more of an establishment “Republican” not less of one, wouldn’t it?  And suggesting otherwise evidences a dimly lit notion of the forces fueling Trump’s rise in the polls …

Can a man serve two masters?  In the Biblical admonition against attempting such dual servitude, God and money were pitted against one another.  In Paul’s case, God and money (a.k.a. the GOP establishment) are on the same team – it’s those pesky people his father Ron Paul got all riled up who need to be tamed.

You know the people I’m talking about: The free market fiscal conservatives and social libertarians who look beyond the sound bites and rhetorical fluff and insist on substantive ideas – and ideological consistency in their implementation.

If Paul can successfully meld those people to the shrinking Republican base … his future is, as Tom Petty once crooned, “wide open.”  In fact his argument to that shrinking base – which is reticent to accept atheists, gays, blacks, etc. – is that they no longer have a choice in the matter.  At least not if they want to win another national election.

Can Paul pull it off though?  Is this Hegelian dialectic he’s envisioning really advancing toward some sort of electoral synthesis?  Or is his bid to shove free thinking capitalists into the same tent as corporate cronyists and sanctimonious moralizers doomed to fail?

Frankly, we’re amazed Paul went the GOP route.  He was – and potentially still is – the perfect independent candidate.  His record and policy views (when he’s not catering to the “Republican” primary electorate) fit better than any other presidential candidate in the fiscal conservative, social libertarian mold – which is where the electorate is going.

But as long as he’s running in the GOP primary, Paul has a problem.

And while left-leaning reporters like Benen may have the issues matrix jumbled, his assessment of Paul’s basic predicament – “trying to appeal to Republican primary voters while reaching out to independents and retaining his own core followers, all the while both embracing and rejecting GOP orthodoxy” – is spot on.

Trump is sucking up all the oxygen out of the room. Rand,Cruz, Walker, et al are all plateauing until and unless Trump fades.

Rand who? And to think, I once thought he was the GOP’s future. Well actually, I still do. I guess they ain’t movin’ to the future just yet.

I thought for a time he was the best candidate with his libertarian domestic ideas and his stand on our military he was the best of both worlds. Something must have happened. I knew it was too good to be true.

Wait, I thought Trump was your guy. After Scott Walker was your guy. Oh well, it has be incredibly confusing to be a republican these days.

Yes, and it is just too early, twelve months or more before the nominating convention and sixteen months till the election. Candidates have to stay in the NEWS and therefore have to keep saying something to keep them relevant.
The secret is to stay in the NEWS, without alienating anyone, no matter what Trumps does..

Trump has done his job again. Next Sarah Palin will step in and do something crazy to get Cruz out of the picture so it will just be down to Trump, Palin, and Jeb. Everything is proceeding as planned

Trump/Palin would be the greatest thing ever. Make it so, crazies!

And here I thought Cruz had locked up the crazy vote.

Mmmmm … The Good, the Bad and the Ugly. … Palin, Karl Rove’s meat puppet, and The Donald.

All the republicans are ducking Trump’s insipid e-trolling. They do not want to “dignify him with a response.” Unfortunately that is how elections are lost. The classy nice guy usually finishes last. People respond to Trump’s brash willingness to defy the PC Gestapo and speak his mind. The first one to step up and engage has the advantage if he can avoid foot-in-mouth disease.

I could vote for Paul but I need to hear a lot more from him.

What is a ‘republican’ these days? What does the party stand for?

This is a very crowded field. If all the democrats can offer is Hillary then whoever wins the nomination for the republicans will have my vote. I don’t want to have to hold my nose and vote this time. I would like to see Dr. Carson get the nomination. I like the fact that Trump is outspoken and an outsider but I’m not sold on him. Someone needs to step up with fresh ideas and establish some serious name recognition and electability. It is obvious that the democrats are without them since they are trotting Hillary out again.

That’s not an answer to the questions. Which means they have no identity or clear direction. Unfortunately, the GOP is allowing the media to shape their image. Which now appears to be the party of crazy old racists who follow a silly, completely unqualified blowhard. If the GOP is serious at all about winning back the Whitehouse, they better do some damage control fast!

Which old white guy will win the Repub nomination? Nothing new to see here, just the same old retreaded ideas that got us here. Tax cuts for the rich as a panacea.

Not this time. With Jeb, your tax cut for the wealthy gets you a pinata. Ole!!

I don’t want to have to hold my nose and vote this time – try a different line, or don’t go when T Law is there. He has a fecal fixation.

I’m watching him chainsaw the tax code as I write.
He’s making a mess. I hope he recycles the paper, but that would mean he had some kind of impulse for social responsibility.
“social libertarians”? Rand is a social conservative just like his old daddy. Their social libertarianism stops just short of a woman and her rights to decide what she does with her body.
Legal pot and refusing vaccinations for those children you “own” are the kind of social libertarian issues that appeal to Rand, likely purely for effect.

“It’s the economy, stupid.” … and Rand Paul will be there when all the others show up clueless about the economy.