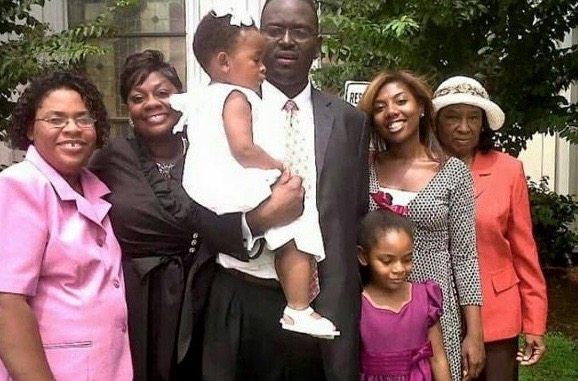 AND YOU REALLY, REALLY NEED TO READ THEM …

|| By By WILL FOLKS ||  My website sparred often with S.C. Senator Clementa Pinckney.  We agreed on certain issues – like the need for a private sector port in Jasper County, S.C. – but we disagreed on most others.

And those disagreements with the good Reverend were often quite heated …

“For in the final analysis, our most basic common link is that we all inhabit this small planet,” Kennedy said.  “We all breathe the same air. We all cherish our children’s futures. And we are all mortal.”

Amen to that (and Kennedy’s views on taxation, for what it’s worth).

Anyway … in that spirit, here are the letters Pinckney’s two children wrote to him following his brutal murder at the hands of a 21-year-old white supremacist. 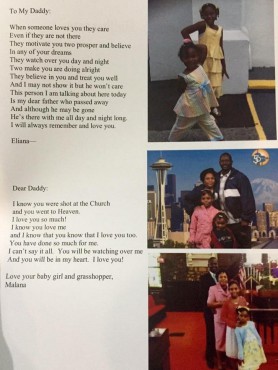 All I could think about reading those letters is that he called one of his little girls “grasshopper.”  One of my little girls, Eva, I call my “ladybug.”

That’s the commonality Kennedy spoke of … the shared humanity which is too often forgotten amidst our deliberately divisive discourse.

We forget it because we never see it – or hear it.  In the aftermath of tragedies like the one that was visited upon Mother Emanuel we’re manipulated.  We’re misled – conditioned by fringe voices to take our justified anger at the injustice of the world (a consequence of our shared sins) and project that anger upon people who don’t look like us.  Who don’t worship like us.  Who don’t live or love like us.

We equate surface differences with blame, failing to realize we’re all in this together against a much bigger enemy … one which would have us believe it accepts everyone when in reality it exist to exploit everyone.

We all inhabit this same planet.  We all breathe the same air.  We all cherish our children’s futures.  We are all mortal.

But to that I would add this: We all have the same forces holding us back.

My website has said it before and will no doubt  say it again.  In the war for freedom and free markets – for expanded liberty and prosperity for all Americans – there is no black or white, man or woman, gay or straight, Christian or Muslim.

There is only “us” trying to make it versus “them” trying to take it.

And it’s not my generation I’m worried about (thanks to the last generation, that ship has sailed).

As best I know how, I’m fighting for “our children’s futures” – the ones that belongs to my “ladybug” and Clementa Pinckney’s “grasshopper.”  And their sisters and brothers of all races, religions and backgrounds.

Flip had the audacity to say that this man probably preached hate at his church as a way to defend Dylann. Very sad indeed.

Dear Daddy, Mr. Obama gave us $29 million dollars to split among the 9 families… mommy is getting a Lexus.

Come on Squishy, those little girls don’t know or care about money or the greed of adults. I’m sure they would trade a wheelbarrow load of cash to get their Daddy back.

Shit… all they know is outside of church mom is dancing and singing and a white lady is coming by to clean their house.

I would give anything for the lesson from Charleston to have been the forgivness of the families and the love of the people of Charleston, including these children.

Instead, arrogant asses brought their confederate flag drivel into the mix and cheapen it all. America had a once in a life time opportunity to watch real people act like spiritual and emotional heroes-they were truly wonderful examples of the best of humanity.

Instead, bitches like Nitrate and Bozz and others could not contain their righteous anger and genetic superiority, and they cheapen us all with their blabber.

Since my language has been poor already…let me say to you know-it-all pricks” [email protected] off and find some hole to live in. Leave the good people alone…we want to heal and grow, not pick the scabs off of wounds and fight.

Mark sounds a little upset, maybe he needs a laxative.

Being a politician and a minister does not make you a hero, some of the biggest crooks in this country have had those titles.

I’m sure they are forgiving, they just went from the poor house to the penthouse after the President and all the big companies around the Southeast started dropping money on them.

You are right Mark! Before the outsiders (pp from other states and the national news media) got involved, we felt the pain of our brothers and sisters being massacred by the devil himself who walked into their church. We watched true amazing grace as the victims’ relatives FORGAVE the killer in weakened voices from unimaginable crying. Most of us listened in awe, wondering if we could ever show the grace and forgiveness if we were in their circumstances. Our state, for a brief moment was united as one – praying for victims’ families, even helping financially. Then the outsiders came here to “stir it up”, casting aside what was important and putting other agendas in place of them.

Yea, thats the problem, all those “outsiders” stirring up our darkies.

http://www.washingtonpost.com/posteverything/wp/2015/07/01/why-do-people-believe-myths-about-the-confederacy-because-our-textbooks-and-monuments-are-wrong/?hpid=z2
Read this and do some serious growing.

You’ve won. Southern cleansing has succeeded. Do you have to rub it in?

Read this and do some serious growing.

Growing?
TBG felt his IQ dropping with each sentence…

Having said that, if you can read those little girl’s letters without welling up with tears…you ain’t human.

Now that’s it’s legal, we don’t have to.

Thank you for destroying this thread.What started out as a tribute to the children of a fallen servant of the people, was turned into an ugly,perverted side show by your low life,decadent sorry ass.

Are you kidding me? This is what you have to offer? Or was that a ruse?

Please man, for the love of all things good, drop the liberal tripe and think for yourself.

As a conservative I see mindless thought passed off as meaningful dialogue everyday…on my side of the ideological fence. I see rote regurgitation of special interest talking points presented as “the true conservatism.” I see it every day and it disgust me.

Americans no longer have the power of independent thought and you sending me to the Wash Post so I might read a throw away, third tier article proves the point.

True, sincere human compassion, forgiveness and mercy are far more powerful than babble about some flag. A chance for real growth as a nation passed us by, and in its place we got the bitchiness of YOU and EUWE MAX.

How much mileage will the leftwing hate squads try to milk from the murders of these Christians? I know you want to exploit this event until Nov. 2016. I just don’t think that will work. You’ll have to answer for your failure. These poor murdered souls, or their families left behind, will not bail you out, as you’re hoping.

They will mike this for all it is worth!

No.. that would be education.

How much mileage will the leftwing hate squads try to milk from the murders of these Christians?
——
I’m thinking we’ll make government cheese out of it before we’re done!

By 2016, there won’t be any government cheese left. Six years, so far, of a backward, poverty-causing economy, the give-away programs are scraping bottom already. You’ve pretty bankrupt all the largess of the producers.

…I saw what you did there.

That’s my story… and I’m sticking to it, pork chop.

Nice to see the right wing overflowing with sympathy for kids who lost their dad.

The first time I have read an article on this site that makes me want to cry. I call my little one LoveBug.

Keep fighting for our children’s future!

It would be nice if ALL father-child relationships had the same level of acknowledgment. EVERY child deserves to know who their daddy is, and know that daddy CARES for them. Sadly, way too many fathers don’t. And the same media that uses this very sad story, is next-to-criminally neglectful to not tell us about all the other kids who have dads who place them in a deep whole, before they even get a chance.
If you can move an ancient and very harmless flag in a week, based on your racially-based hate. Why can you not conjure up the same amount of love to demand fathers take care of their children. Are you that hateful, dis-compassionate or, are you just so ignorant of the REAL problems in the community, you have no idea there is a problem.?

Stop making this about the Confederate flag and single parent homes. Stop bringing this bullshit into this.

Have you NO shame?

Have you no heart? No compassion? No empathy? I could not comment more on this yesterday, because I can feel the pain of those children through my own children’s words. I have been asked, “Mom do you think you will be alive when I get a job? I hope you live forever. I wouldn’t trade anything for you. I love you so much.”

During Science class, we studied insects. One was a grasshopper that she became very fond of and named it grassy. She cried the day we had to let grassy go but this year grassy came back.

Children are so innocent, so trusting and so loving. It breaks my heart for this family.

Probably the most difficult comments I have ever made. So before you get snark on — think about it.