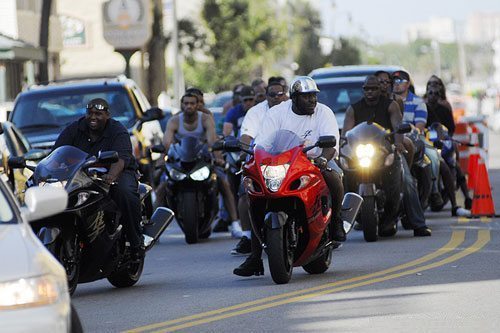 VIOLENCE DOWN ON GRAND STRAND …

|| By FITSNEWS || South Carolina has been spared direct landfalls from major hurricanes over the past quarter century … and on this Memorial Day weekend its Grand Strand dodged yet another bullet in the form of the annual Atlantic Beach Bikefest.

Controversial new regulations, a beefed-up police presence and a new “traffic loop” aimed at minimizing loitering appear to have succeeded in stemming much of the bloody violence which marred last year’s gathering.

And apparently it was all good …

“We must have done something right, because last year I couldn’t get in here,” Horry County council chairman Mark Lazarus said in addressing a less-than-packed gathering of citizens held in the aftermath of the annual festival.

A year ago, citizens were calling for the heads of elected officials …

North Myrtle Beach, S.C. – which is located next to Atlantic Beach – saw forty-seven arrests over the Memorial Day weekend.  A year ago the city reported 105 arrests. Tickets, wrecks and calls for assistance were also down.

County data – and data from the city of Myrtle Beach – should be released soon, but those numbers are expected to reinforce the downward trend.

Obviously we’re glad criminal activity declined at this year’s event … although as we stated previously some of the new regulations struck us as prima facie unconstitutional.