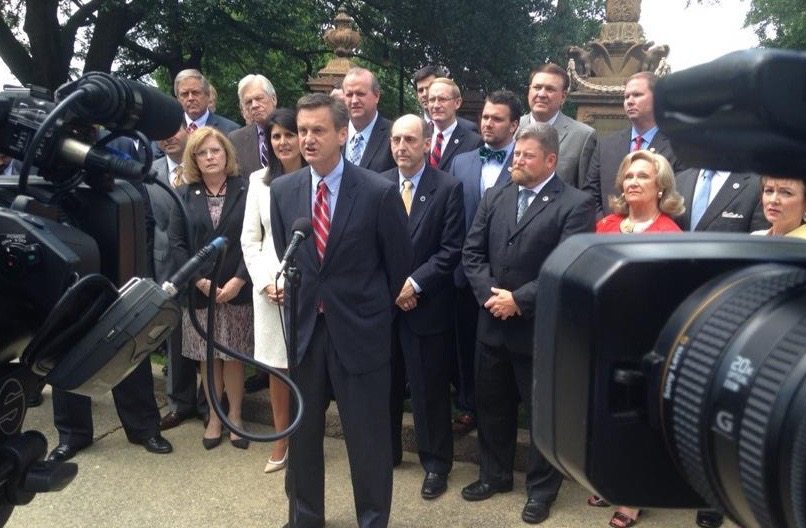 WILL IT BE ENOUGH TO STOP A MASSIVE TAX HIKE?

|| By FITSNEWS ||  Lawmakers and S.C. governor Nikki Haley appear to be tacking every-so-slightly to the right on some important fiscal issues as a contentious 2015 session of the S.C. General Assembly winds down … with fiscally conservative S.C. Senator Tom Davis dominating the debate.

Davis has been filibustering in the S.C. State Senate for the past few days against a gasoline tax increase – arguing the state has more than enough money to adequately fund its roads and bridges.  He’s absolutely correct: And his argument was further buttressed late last week when it was revealed an additional $400 million in new revenue was likely to be certified by the state’s Revenue and Fiscal Affairs (RFA) office.

Now Haley – who has done next-to-nothing to blunt legislative spending over the last four years – has come out in support of earmarking this new revenue toward road maintenance, debt reduction or tax relief.

Good for her … and good for lawmakers like Katrina Shealy and Eric Bedingfield, who joined Haley in standing with Davis.

Will it be enough to kill a tax hike?

We’ll see … let’s not forget there are some incredibly powerful special interests pushing to raise the state’s gas tax, and Haley has previously shown little backbone on this issue.

South Carolina’s “leaders” have tried all sorts of gimmicks this year in an effort to pump more money into the state’s chronically mismanaged highway bureaucracy.  First there was Haley’s proposed swap – which backtracked on her 2014 campaign promise not to raise the gas tax.  Then there was some attempted trickeration from the S.C. House (which ultimately passed a $427 million hike).  That was followed by this proposed $800 million tax hike from the S.C. Senate finance committee.

Our position from the beginning of this debate – through all the smoke and mirrors – has been clear: No new taxes.  Especially not on dirt poor citizens who already pay a greater percentage of their income on fuel than residents of every other state save Mississippi and West Virginia.

There’s no need for it in a budget of $25.7 billion (and growing), and our people simply cannot afford it.

What is there a need for?  Spending restraint …

We’re glad Davis has finally stood up (literally, for hours on end) and said “enough is enough.”  And we’re gratified to see he’s getting some support in that effort …

Let’s hope it’s enough to defeat this unnecessary, economically harmful gas tax hike once and for all ..