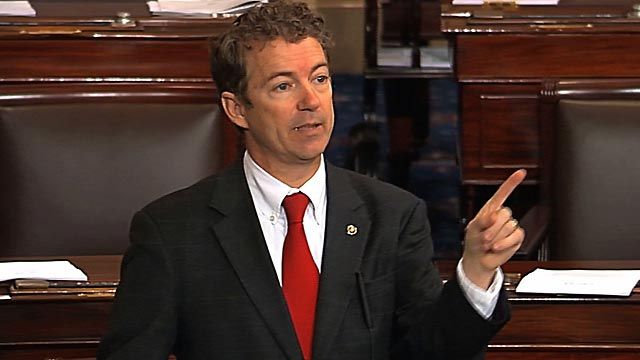 2016 PRESIDENTIAL CONTENDER TAKES ON THE NSA

|| By FITSNEWS || U.S. Senator Rand Paul took to the floor of the U.S. Senate this week to protest the federal government’s domestic spy network – which was found unconstitutional by an appellate court earlier this month.  Specifically, Paul is challenging the reauthorization of the so-called PATRIOT act – which has been used to justify the government’s mass collection and storage of private data without a warrant.

Obviously, such bulk collection and storage is a flagrant violation of the fourth amendment protection against unreasonable searches and seizures.

“There comes a time in the history of nations when fear and complacency allow power to accumulate and liberty and privacy to suffer,” Paul said.  “That time is now and I will not let the Patriot act, the most unpatriotic of acts go unchallenged.”

Paul’s challenge isn’t technically a filibuster, as Senate rules will force him to stand down within twenty-four hours whether he’s still going or not.  But it is reminiscent of his 2013 filibuster of the nomination of John Brennan as director of the Central Intelligence Agency (CIA) – a bold pro-liberty stand which garnered him national attention and helped kickstart his 2016 presidential campaign.

Details of the National Security Agency (NSA)’s domestic spy network were repeatedly exposed in 2013 by former agency employee Edward Snowden – whose courageous leaks revealed the extent to which the “land of the free” was really nothing but an Orwellian dystopia.

Warmongering U.S. Senator Lindsey Graham – who is also seeking the GOP presidential nomination – is one of the program’s fiercest supporters.  In fact many believe his entire presidential campaign is nothing but an effort to stalk Paul on this issue – and Paul’s less concrete views on foreign policy.

This website enthusiastically supports Paul’s efforts – and calls on all lawmakers to vote against reauthorizing this unconstitutional act.

“We believe government has a right to gather specific information in the event of a credible threat – which is why our court system expressly provides for the collection of such information on the basis of probable cause,” we wrote recently.  “What government does not have the right to do is collect and store our private information en masse without a warrant.”

So … what should they do to keep us safe?

Something Redeeming About Al Sharpton? Yes …