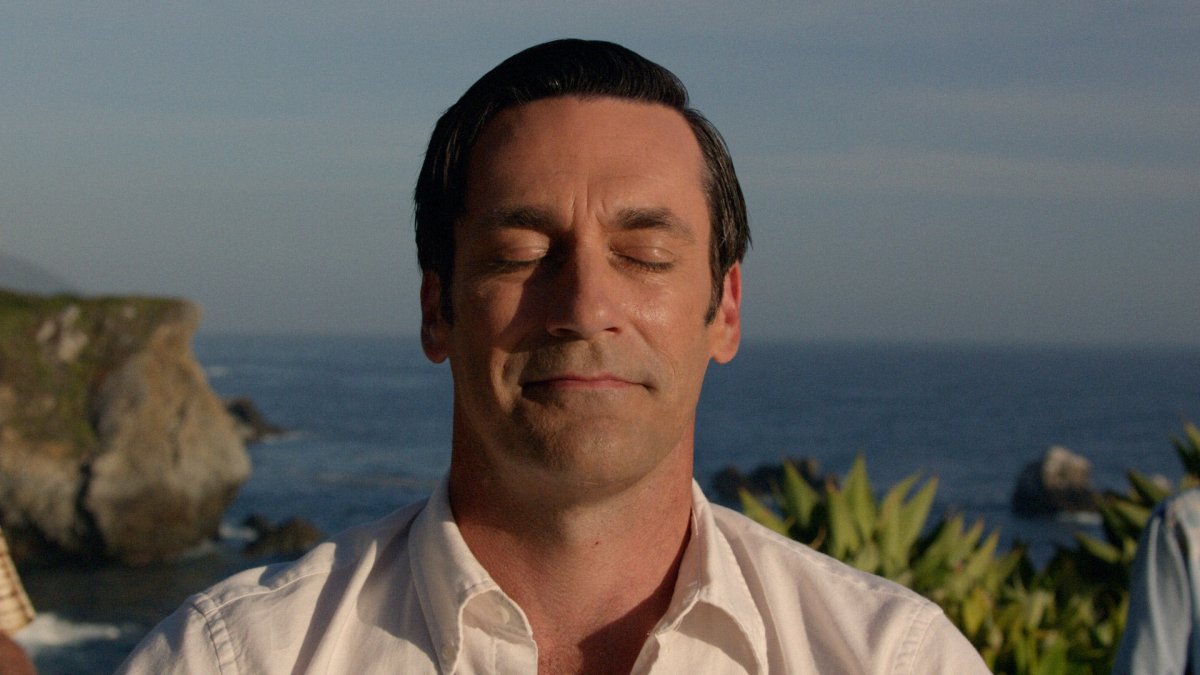 WELCOME BACK TO THE WORLD DON DRAPER TAUGHT TO SING …

|| By WILL FOLKS || There’s a line in Rush’s 1981 hit “Red Barchetta” about a “better managed time.” Or maybe a “better vanished time.” Who knows.  If you can decipher Geddy Lee‘s lyric, more power to you.

But either way, it fits.

Barchettas are 1940s-era Italian roadsters – exactly the sort of car you’d imagine Mad Men‘s leading man Don Draper tooling around in during a business trip to California. Dark shades on.  Cigarette dangling.  With a jaw-dropping blonde in high-hemmed pastel and a matching scarf in tow.  Going fast.  A little drunk.  With no particular destination in mind.

It’s existential nihilism.  The exact same state of being which bred the basic need Draper so consistently tapped into … and effortlessly exploited on behalf of himself and his clients.

The fictitious 1960s-era advertising executive – portrayed with riveting detachment by actor John Hamm – was brilliant for the same reason he was tormented.  He understood need on an elemental level.

More on why that matters in a moment …

If you’ve never watched Mad Men, you’re forgiven.  The first episode I ever watched (S. 1 E. 1 “Smoke Gets In Your Eyes”) left me unsatisfied.  Confused.  But as I determined to wrap my brain around the series – which bowed out gracefully this week after seven commercially successful, critically acclaimed seasons – the more I appreciated the development of its protagonists, the depth of their interactions and the insights they provided into the human condition.

Created by Matthew Weiner, Mad Men debuted in 2007 … with its clock rewound to March 1960.  Enter nostalgia.  The “better managed” time.  A world devoid of the instant, digitized gratification we’ve been conditioned to accept as part of our ongoing bargain with “The Matrix.”  Mad Men embodied the sort of crispness you can’t measure in megapixels.  The sort of passion you can’t convey in a bawdy iPhone exchange.

The America this man inhabited was marching boldly through tumult and tribulation toward a future unrivaled in the history of civilization.  This country made things of value.  Played baseball.  Smoked cigarettes.  Drove big cars.  Dreamed big dreams.  Had manners.  Work ethic.  A vision.

And everything it had to offer … Don Draper could sell.  Nothing was going to stop that country … or so we thought.

But we were wrong.

As a turbulent new economic order unfolded in the United States these last seven years (a.k.a. the “New Normal”), Weiner’s period drama pushed forward a little more than a decade to November 1970 – culminating in a season finale which drew an audience of 3.3 million (and that’s before counting “delayed viewers”).

Third highest Mad Men audience ever … (eclipsed only by the Season 5 and Season 6 premieres).

We shouldn’t be surprised.  The less fulfilling things got in Recession-era America … the more this show drew people into its smoke-filled self-exploration.  And I’m not just talking about the baby boom generation that coughed up the ball in this country, either.  The generation that followed – which never lived a single day in the 1960s – allowed themselves to be pulled back in Mad Men‘s time.

Hell they probably understood it better …

The focal point was always Draper.  His arrogance, haunted past, reckless infidelity, professional brilliance – and cringe-worthy binges of introspection.  Money, style and limitless sex appeal eternally masking his search for something couldn’t quite lay hold of.  Not until the very end, anyway.

Which leads us to the “spoiler alert …”

There we have Don Draper:  The definitively dapper, starched-shirt, anti-beatnik himself – sitting lotus pose on the edge of a cliff overlooking the Pacific Ocean with a bunch of rich hippies.  He’s had an emotional breakdown.  Maybe the show is going to end with him jumping off a building like the silhouetted cutout in the show’s opening credits.  But a new day has dawned.  And he’s chanting.  “Aaaaaahhhoooom-ing.” And then ever so subtly, we see him smiling – seemingly at peace for the first time in his life.

At that precise moment, just when you think a fade to black is in order, Weiner makes his move.  He cuts to Coca-Cola’s famous July 1971 “Hilltop” ad – in which the world (or at least dozens of fresh-faced young people from every corner of it) are learning to sing in perfect harmony as they enjoy an iconic nectar of high fructose corn syrup, carbonated water and caramel food coloring.

“Don’t you want to work on Coke?” one of Draper’s colleagues asked him during a gut-wrenching phone conversation earlier in the episode.

Apparently, he did … just ask the guy who played him.

“My take is that, the next day, he wakes up in this beautiful place, and has this serene moment of understanding, and realizes who he is,” Hamm said of the character he portrayed for seven years.  “And who he is, is an advertising man. And so, this thing comes to him. There’s a way to see it in a completely cynical way, and say, ‘Wow, that’s awful.’ But I think that for Don, it represents some kind of understanding and comfort in this incredibly unquiet, uncomfortable life that he has led.”

“The world doesn’t blow up right after the Coke commercial ends,” Hamm added.

But it’s impossible to argue it hasn’t recoiled.  We can’t say the country sold by Don Draper’s genius hasn’t retreated from the promise it once held.  Things are bigger and faster, sure … but to what end?  Speed has replaced inventiveness.  Precision, passion.  Utility, creativity.  And yet in a world in which everyone has handheld devices that work far faster than we need them to (and machines which do everything we once did by hand), no one has a second to spare.  Or a hand to lend …

This is not a struggle for self-actualization, though – like the one successfully seen to its happy conclusion by Don Draper.  It’s an increasingly pitiable attempt to secure overvalued abundance for ourselves – a resignation to material plasticity seen in the welfare recipients government has deemed “too lazy to work,” the bailout recipients it has deemed “too big to fail” and the shrinking, squeezed out middle class forced to pay the freight for the thieves at the bookends.

We don’t need anymore, we want.  And more often than not, we get what we want … whether we can afford it or not.

The popularity of Mad Men is its own commentary on our pervasive contemporary malaise.  A statement of our collective desire to not only get back to that “better managed time,” but to restore the authentic need that’s been lost amid all these gigabytes of incessant stimuli and vacant interaction.

That time is gone, though … and that country?  It’s vanishing.

Thomas Ravenel Regrets Breaking Up With Baby Momma On Facebook