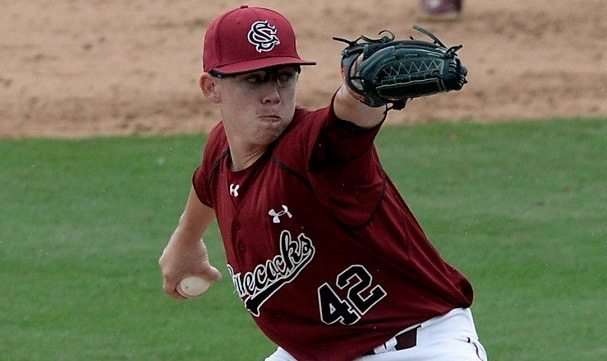 CAN SOUTH CAROLINA SALVAGE ITS SEASON?

|| By FITSNEWS || The University of South Carolina baseball team won the College World Series in 2010 and 2011. And appeared in the CWS finals in 2012.  Then longtime head coach Ray Tanner resigned to become the school’s athletics director, giving the job to former assistant coach Chad Holbrook.

Holbrook’s first team didn’t make it out of the super regional round, while his second team failed to advance past its home field regional last spring – the first time that had happened since 1976.

Despite this downturn, we were optimistic things were looking up thanks to Holbrook’s recruiting success … in fact we wrote last spring that “we fully expect Holbrook to reorient the trajectory of the program given the talent he’s brought in … as well as some of the stars he’s already landed for the 2015 class.”

Unfortuantely the 2015 season has been an even bigger disappointment.  In fact the Gamecocks are on the verge of – gasp – not qualifying for the NCAA postseason for the first time since 1999.

“This is getting down right embarrassing,” one frustrated fan wrote to us.  “My how the mighty have fallen. A few years ago winning and competing in the College World Eeries.  Now (in) 2015, they could not win the little league world series.  No Pitching, no hitting, poor fielding: It goes to show you some assistants are not head coach material.”

Holbrook’s response to the mounting criticism?

He gave an interview with The (Charleston, S.C.) Post and Courier last week talking about how his kid used to have cancer and that dealing with fan criticism was “a piece of cake” by comparison.  We’re sure that’s true … but heartwarming stories aside, his job is to win games.  And the longer Gamecock baseball fortunes continue to decline, the less people will be willing to cut him some slack.

Hopefully the Gamecocks will mount a run over the next month and silence the critics … building on the momentum from a big series win over Vanderbilt last weekend.