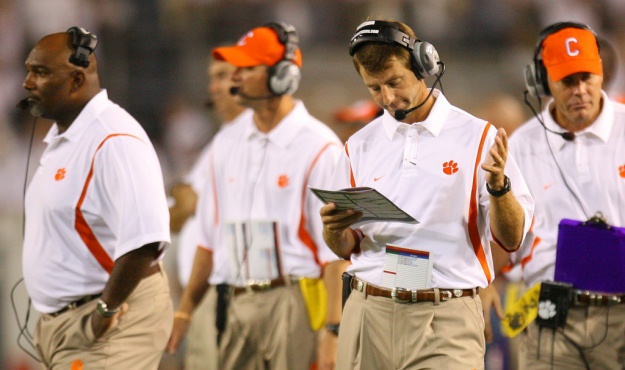 Clemson University wide receiver Kyrin Priester has been dismissed from the Tiger football team for having an “unacceptable attitude,” head coach Dabo Swinney announced following the team’s practice on Wednesday.

“Kyrin Priester has been dismissed from the team for an attitude that is not acceptable to our standards,” Swinney said in a statement.

A true freshman, Priester played on special teams in the Tigers’ 45-21 loss to Georgia last weekend.

Clemson had hoped to utilize Priester as a possession receiver given his route-running skill and exceptional hands.

“This guy can motor,” Swinney said last year upon signing Priester.  “I think he is a Jaron Brown with a little more speed and athleticism.  Jaron Brown played as a rookie a lot and played in the NFL with the Cardinals this year.  He will be a very versatile player and we can move him around and he has an ability to stretch the field.”

“Walk boldly through the doors God opens for you, and don’t become discouraged when He closes one,” Priester wrote on his Twitter page in reference to his dismissal.