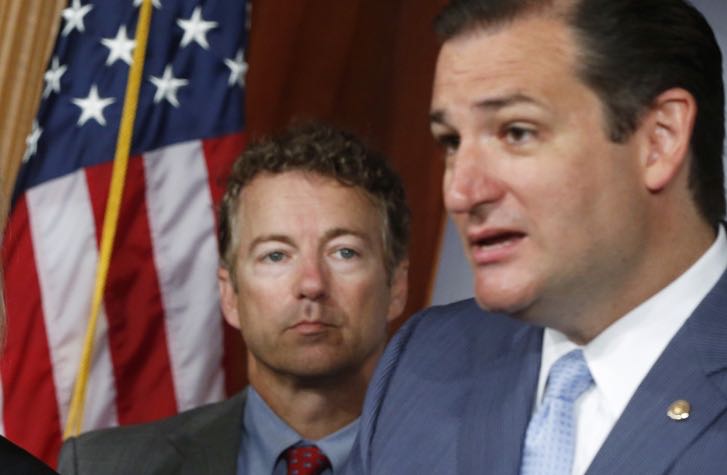 BATTLE JOINED IN THE PALMETTO STATE …

One day after U.S. Senator Ted Cruz announced his candidacy for the presidency of the United States, early state supporters of fellow fiscal conservative U.S. Senator Rand Paul started taking shots at him.

“Ted Cruz announced his run at Liberty in front of 10,000 students, none of whom had any choice in whether to attend,” Davis wrote, quoting the Reason article.

“Which is fine; that’s a savvy political move by him,” Davis continued, in his own words.  “Important, though, that the public gets the whole story. Don’t confuse Cruz’s compulsory gathering with Ron Paul’s SRO college rallies.”

SRO, for you unhip, refers to “standing room only.”

Judging by early polling in Iowa, New Hampshire and South Carolina – three early voting states which basically decide the GOP nomination – neither candidate is drawing much in the way of popular support.  Of course it’s early yet.

Our hope?  That both Cruz and Paul (and their supporters) will train their fire on establishment “Republican” candidates as opposed to each other in the months to come.  Of course such a strategy would run contrary to the whole “win your bracket” approach to the primary fight – in which GOP candidates aim first to prove their worth to factions within the party (be it establishment, evangelical, Tea Party, etc.).

And make no mistake, Cruz and Paul are competing in the same bracket …

Ted Cruz Signed Up For Obamacare … And Got MSM Love In SC?