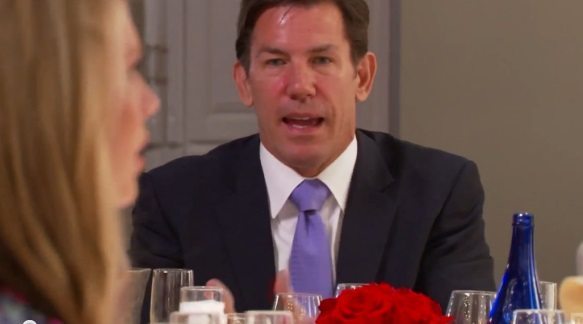 … WONDER HOW THIS EPISODE WILL END?

|| By FITSNEWS ||  His political career is deader than a doornail, but on his disavowed reality television show Southern Charm, the Thomas Ravenel “comeback” is in full swing.

Ravenel launched his 2014 U.S. Senate bid on this week’s episode of the Bravo TV program – comparing himself to Calvin Coolidge at a swanky dinner party.

Coolidge was famously known by his nickname, “Silent Cal.”  In fact a socialite once wagered she could get the conversation-averse president to say more than two words at a White House dinner party.  His reply?  “You lose.”  And then he proceeded to remain silent for the duration of the evening.

“The words of a President have an enormous weight,” Coolidge once wrote, “and ought not to be used indiscriminately.”

Such reservation is clearly foreign to Ravenel, who spouts – and then retracts – opinions like a broken metronome.

At his dinner party, Ravenel’s campaign announcement is met with a mixture of odd looks, grimaces and chuckles.  Oh, and Shep Rose – one of his wealthy Charleston, S.C. co-stars – remarks that supporting Ravenel financially would be like “lighting money on fire.”

So … how does this story end?  Do we really need a “spoiler alert?”

No … it ends in humiliation.  Without putting too fine a point on it, Ravenel took a potentially viable independent candidacy and through the sheer, unrelenting force of his boundless insanity – turned it into a laughingstock.

Of course it wasn’t just his fault … he had some “help.”

For those of you keeping score at home, the second season premiere of Southern Charm drew an estimated 870,000 viewers – a tad below its first season average of roughly 1 million viewers per episode.

Last week, Ravenel railed against the show and his co-stars.

“I’m (d)oing everything I can legally to get off this ridiculous show,” he wrote on his Facebook page (where he frequently links followers to Bravo TV articles).

This week, Ravenel once again ripped into his cast mates for their “bad, unsouthernly behavior” toward his “beloved daugher and her mother,” referring to his daughter Kensington Calhoun Ravenel and his on-again, off-again girlfriend Kathryn Dennis.

“They’re not going to jump on their backs without crawling off bleeding,” he wrote.

Will Ravenel be more successful attracting ratings than he was attracting votes?  We’ll have to wait and see …