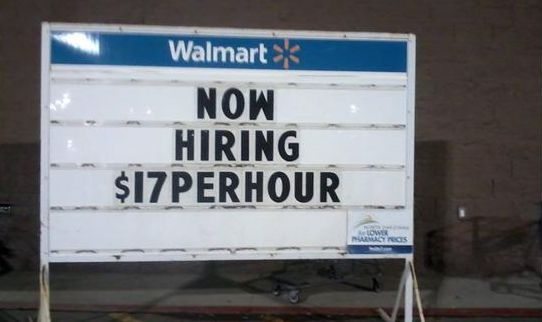 By ROBERT ROMANO || A picture is worth a thousand words.

No, that is not Photoshopped.  It is an actual help wanted sign from Williston, N.D.  The story is the shale oil boom taking place there that has resulted in an explosion of demand for labor, a surge in property values, and a bevy of new construction.

In fact, North Dakota North Dakota leads the nation in the growth of home values at 8.3 percent year over year as of September, according to Freddie Mac.  And it is also the envy of the post-financial crisis economy with the lowest unemployment rate anywhere at 2.8 percent in October, according to data compiled by the Bureau of Labor Statistics.

There was no hike in the minimum wage there — it remains $7.25 an hour.  No onslaught of wage and hour regulations.  No redistribution of wealth or stupid tax credits or welfare.  Just innovation and growth that has created over 136,000 jobs — a 40 percent increase — in the past decade in an area so sparsely population it barely registers on the electoral college.

To put those 136,000 jobs into perspective, it outpaced the growth of population in the state.  That is to say, everyone who moved to North Dakota or came of age there has pretty much found a job.

There is such a shortage of labor there that, yes, to fill certain shifts Walmart is willing to pay people $17 an hour.

Now, with oil prices crashing in the past many months on weakening demand globally, one might expect a slowdown in production, a cooling of home values if not a drop, and a slowdown in wages.  Perhaps a temporary increase in unemployment.

But the point stands.  Legitimate growth in production over several years created a surplus demand for labor, a surge in wages, and a boom for housing.