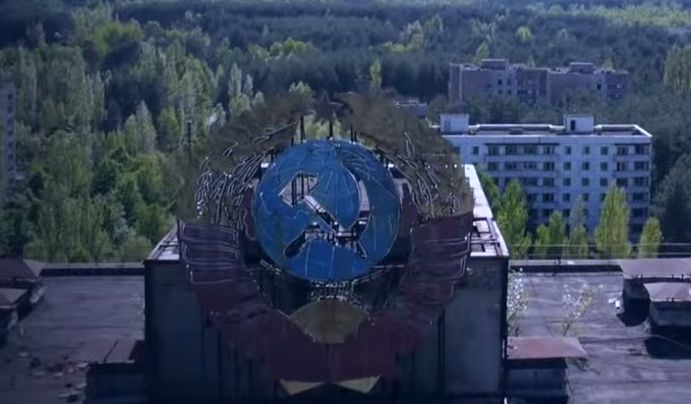 By FITSNEWS || There’s still one place in Russia that hasn’t de-Sovietized itself … a place where the hammer and sickle logo of the former Union of Soviet Socialist Republics (USSR) is still visible above government buildings.

We’re referring to Pripyat, established on September 4, 1970 as the Soviet Union’s ninth “nuclear city.”  Once home to a population of 50,000, Pripyat was abandoned in the aftermath of the 1986 Chernobyl nuclear power plant disaster – which along with the 2011 Fukushima Daiichi nuclear disaster is the only incident ever to register a Level 7 on the International Nuclear Event Scale.

After the incident, Soviet authorities created the Chernobyl Zone of Exclusion – a 1,000 square mile area surrounding the Chernobyl facility that remains essentially empty.  Currently administered by the government by Ukraine, the Zone of Exclusion is home to an estimated 150 or so permanent residents and 3,000 or so workers – who monitor the decontamination of the area.

Recently, U.S. photographer Philip Grossman traveled to the Zone of Exclusion and took numerous still pictures of the deserted city – and the abandoned nuclear facility.

Those images included views of the Chernobyl sarcophagus and the control room of reactor number four, where a sudden power spike during a routine systems test on April 26, 1986 resulted in a botched shutdown attempt – one that caused a series of steam explosions and the rupture of the reactor vessel.  Thirty-one people died in the initial event, while tens of thousands more were exposed to harmful radiation – thousands of them eventually succumbing to the exposure.

Grossman also used an unmanned drone to take aerial videos of the city and the plant.

According to Grossman, his video represents “the first ever aerial footage shot by an unmanned aerial vehicle in the Chernobyl Zone of Exclusion.”

The Catholics Are Loaded

Most Popular Baby Names of 2014