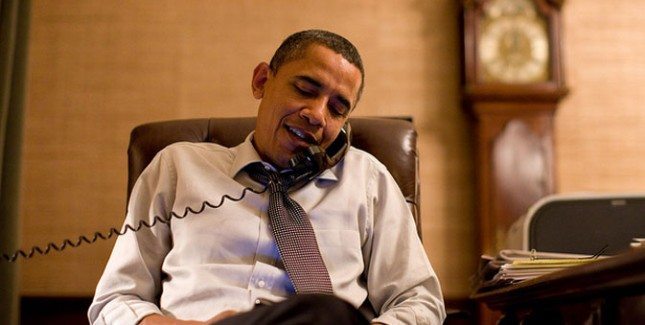 By FITSNEWS || Less than a week after his party got beaten down in the midterm elections, U.S. president Barack Obama ramped up his tone-deafness – urging fresh government restrictions on the internet.

All in the name of protecting the internet, of course …

“An open Internet is essential to the American economy, and increasingly to our very way of life,” Obama said. “By lowering the cost of launching a new idea, igniting new political movements, and bringing communities closer together, it has been one of the most significant democratizing influences the world has ever known.”

Exactly … no thanks to government, though.

Rather than leave well enough alone, though, Obama wants the government to impose its definition of “net neutrality” on service providers – implementing “the strongest possible rules” in an effort to preserve and promote “an environment that encourages new investment in the network, new online services and content, and everything else that makes up the Internet as we now know it.”

Translation?  The government is here to “fix” the only thing left in America that isn’t broken.

We wrote on “net neutrality” back in 2010 – the last time Obama tried (unsuccessfully) to foist it on the web.

“We’ll be the first to admit that we’re not experts on this subject, but at first glance it seems like another excuse for government to stick it’s nose someplace it doesn’t belong … which is bad,” we concluded.

“This is truly the American way of censorship,” he wrote. “Figure out how those with the deepest pockets can smother the free speech of those with little or no voice on the one medium in which information flow is still treated equally. The nightmare scenario here would be that status quo companies use their funds to price out everyone else. It would kill innovation on the web before it starts. It’s just another example of the status quo attempting to build a moat around itself that we have already seen in so many other areas of the economy.

“The internet really is the last bastion of freedom and dynamism in the U.S. economy and this proposal could put that at serious risk,” Krieger concluded.

Government already monitors (unconstitutionally we might add) everything Americans consume on the internet … now it wants to take the Orwellian impulse one step further.

We can’t let that happen …

The internet is everything Obama says it is, “one of the greatest gifts our economy and society has ever known” – which is exactly why he should stay a million miles away from it.

Obamacare Architect: You Are Stupid!

Ron Paul: What The 2014 Elections Meant