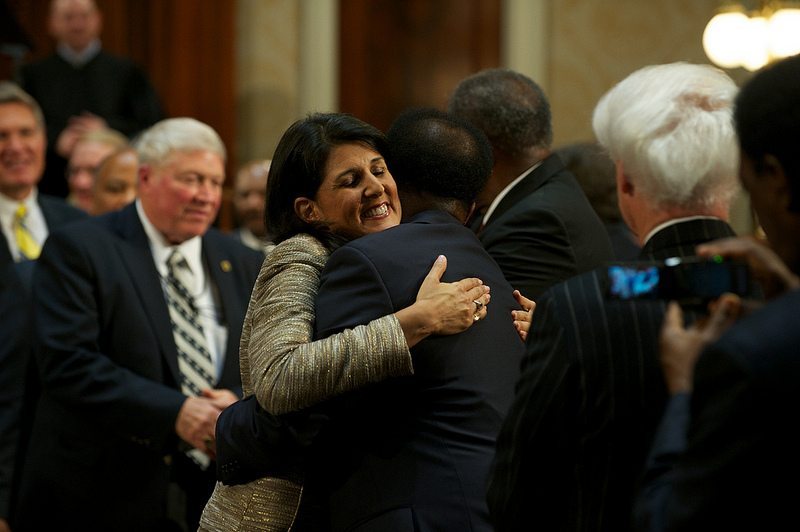 Ervin – a self-styled “independent Republican” – has already leveled some substantive pay-to-play allegations against Haley.  In fact this website ran an extensive follow-up story on one of these pay-to-play deals (to read that exclusive, CLICK HERE).

This week Ervin is out with a brand new television advertisement in which he challenges Haley and her husband, Michael, on a shady investment deal orchestrated by the couple’s financial manager, Neil Shah.

“In this perplexing deal, the Haleys borrowed money from Pacific Valley Bank, only to loan that money back out to Dr. Jerome Rubin, while collecting a cool $25,538 profit,” Ervin’s campaign alleged. “While Rubin doesn’t appear to have any preexisting ties to Haley, members of the Haleys’ financial advisor’s firm have ties to both Pacific Valley Bank, Dr. Rubin, and the Sepulvedas. The ties between Stevens, Sloan & Shah and Pacific Valley Bank, in particular, raise questions of potentially unethical conduct benefitting Steven, Sloan & Shah.”

In addition to serving as the Haley’s financial advisor, Shah has also made multiple donations to her gubernatorial campaign – all of which Ervin’s campaign has meticulously documented.

Ervin’s television spot refers to the financial arrangement as a “loan scheme for a million dollars to benefit Haley’s back pocket.”

“It’s worth noting that Rubin has a checkered financial past, including a recent bankruptcy, which raises questions as to his credit worthiness,” Ervin stated in remarks accompanying the release of his new ad.

Obviously income issues are nothing new to Haley.

In August of 2008, Haley – then a State Representative – submitted an employment application to Lexington Medical Center, which wound up employing her for twenty months as a vastly-overpaid “fundraiser.” This job application included a 2007 income estimate which vastly exceeded the amount of money Haley reported to the IRS that year. Specifically, Haley’s application stated that she made $125,000 from her family clothing business in 2007 (a figure that would explain her $300,000 home, Cadillac SUV, etc.).

The problem? On her federal tax returns, Haley reported making only $22,000 from the “family business” that year.

The initial suspicion was that Haley may have lied on her job application – although the much more damaging allegation revolves around the possibility that Haley lied on her tax returns.

Either way, the discrepancy was uncovered as part of an independent investigation launched in February 2011 by former Board of Economic Advisors (BEA) Chairman John Rainey. When reporter John O’Connor of The (Columbia, S.C.) State newspaper busted Haley on this discrepancy a month later – the governor trotted out her chief of staff Tim Pearson to (once again) lie on her behalf.

So far, though, nothing … and we mean nothing … has stuck to Haley.

Meanwhile, with the notable exception of libertarian Steve French, none of the gubernatorial candidates are coming at Haley from her badly exposed ideological right flank.