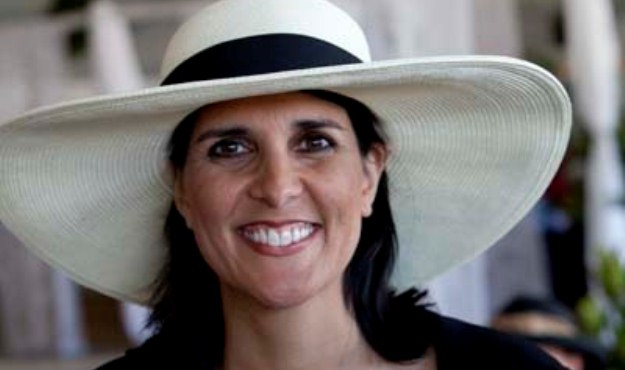 S.C. Rep. Nikki Haley was effectively forced out of her high-paying job at Lexington Medical Foundation earlier this year – something that she and her campaign flat-out lied about.

According to emails published Friday by the Associated Press, Haley’s departure from her $110,000 a year job with Lexington Medical Foundation was far from amicable – and nothing like Haley described it in the press. In fact, it was downright hostile – with Haley bringing in an attorney to negotiate a settlement after she was on the verge of being put on leave for failing to show up for work.

“Despite my constant efforts to have Nikki come in over the past three days, she has failed to come in to meet with me,” Lexington Medical’s foundation director wrote to the CEO of the hospital in March of 2010, adding that Haley knew the meeting was to be about her job performance (or lack thereof). “To me, this exemplifies that (sic) fact that a leave of absence is warranted.”

According to the foundation director, Haley failed to show up at work for two consecutive weeks – prompting his request that she be placed on annual leave.

“I do not choose to take annual leave, nor do I consent to ‘being placed on annual leave,'” Haley fired back at the hospital.

Eventually, Haley referred the matter to an attorney and walked away with a $35,000 severance package and an agreement from the hospital not to do or say anything to embarrass her.

As The (Columbia, S.C.) State newspaper reported last month, Lexington Medical Center created the $110,000 a year job for Haley at the direct request of the hospital’s CEO, Mike Biedinger. This, of course, contradicts previous statements from the hospital claiming that Haley competed “fair and square” for the job and was chosen because of her “connections” and her background in accounting.

Prior to receiving the job, Haley had helped the hospital win approval for its bid to a new open heart surgery center.

When Haley “resigned” her position in April, our founding editor called her campaign manager Tim Pearson. He specifically asked Pearson about rumors he had been hearing to the effect that Haley had been forced out. Pearson assured us that the rumors were false, and said that Haley chose to leave the job so that she could focus her energy on her gubernatorial campaign. Pearson also praised Haley’s work at the foundation.

Still, we noted at the time that Haley’s excuse struck us as “a rather odd explanation considering that Haley has (already) been splitting her time … between campaigning and serving in the state legislature.”

I hope the Mark Sanford news comes out before election day.

Love to know what lawyer she hired for the 35k payout. Was it an evil, liberal, no good Trial Lawyer?

Seriously, she is just a liar and she will likely win. This State is crazy.

Hopefully South Carolina will elect someone who actually shows up for work.

There a part at the Haleys tonight..
http://www.youtube.com/watch?v=GJej6kCgxVM&a=GxdCwVVULXcHabpbylOwSEe3WVJfaJLG&list=ML&playnext=1

At least the hospital’s CEO didn’t sleep with her.

But then, of course, “connections” DID get her the job in the first place.

Matters not, it is all a smoke screen…

While I am not sold on Sheehen, I will probaly vote for him by default because Haley is simply not qualified plus that picture scares me.

Harpo, what Sanford news would that be? Could it be the rumor that Nikki Haley plans or wants to keep Sanford on her staff in some capacity?

For those of you scoring at home, in Nikki Haley’s world, trial lawyers are bad. Unless they’re helping you shake down non-profits for no-show pay. It’s like a bad episode of The Sopranos…

Why did you post a picture of Mr. Ed wearing a hat for this story?

Pluvlaw – I laughed coffee out onto my screen when I read your comment. Sometimes the truth hurts, and then again, as you point out here…sometimes it’s pretty damned funny to boot.

Speaking of Sanford, Ms. Jenny has been awfully quiet lately. Anyone know why or willing to guess why?

Is it true that Nikki “Vito” Haley used to call you Johnny Cakes, FITS?

Ladies, I would not endorse someone who had a thingy with my man.

“This is my dick-eating grin.”

How unethical can one ‘political outsider’ get? Very.

“…with Haley bringing in an attorney to negotiate a settlement…”

She can’t do her own taxes or her own negotiating. What CAN she do?

Maybe she is qualified to be governor. Sanford only failed to show up for work one week. Haley did not show up for two weeks. If you look at the governor’s official day to day schedule there is not a great deal to do!

Please, please, puhleeze: More pictures from the rear, less from the front. Those teeth need some work, especially if we have to look at them for the next eight years.

My first thought is this: if LexMed was limited to only flattering remarks after her departure per the settlement, who leaked these documents? Does she have any recourse? Noticably absent from the uproar of the past week or so has been Jennifer Wilson aka wife of Daddys Boy Alan Wilson. I see the marketing director Mark Shelley is now the official spokesperson — at least for this story. This may have blown over if Jennifer Wilson hadn’t contradicted herself and checked her facts. Or was that intentional, either on LexMed’s part or Wilson’s? No doubt both Wilson campaigns have been passive-aggressive with Haleys candidacy, only showing their true colors when many staffers took up with Mosteller’s Mob. Perhaps this will lead to more questions about how Jennifer Wilson got her job, and just what occurred when she publicly humiliated LexMed a few weeks ago. She’s probably pissed that Haley was making $200/day.

If she wins, we are all screwed.

“As a matter of fact, I AM a fucking witch.”

“I just talked to my trial lawyer.”

Nimrata, you need a psychiatrist. You are one sick B*tch

Just remember, pathological lying and sexual addiction are illnesses. With therapy, there is help.

LEXMED a is not for profit HOSPITAL. During Haley’s tenure more than 1 million was raised for this non profit hospital which treats every one from local community. There is nothing evil, conspiratorial or illegal about it. They paid her for handsome returns. Both parties benefited from Haley’s contacts. Yes- there is contradictions in her story when she resigned. But in many many employment cases, both parties pretend that the parting has been amicable.

“Yes- there is contradictions in her story when she resigned.”

But where did these contradictions went and where does they comes froms?

Yes, I wonder what IS the Sanford news that could break before the election…and what can we do to break it.

Nikki needs to hire a lawyer to keep herself from saying and doing anything that will embarrass herself. Of course she has no shame obviously so nothing she does or says will cause her any.

When Nikki Haley wins by a landslide, it’ll be fun to read the whiny comments left by closet libs on this website!

“The hat is to keep you from getting it in my hair Sic.”

Geeez, Any moment now I’m expecting big old mule ears to poke through the top of that hat!

And then she hired a “liberal trial lawyer” to secure her a $35K buyout. Wonder if she “paid” him for his services or was it the other way around?

You know you can tell when NH is lying? Her lips are moving.

But as someone mentioned above, most SC voters are just stupid enough to fall for her lies just as they did twice with Mark Sanford.

ROFL Gonna be some victory party!!

SC is #1 in football now, so who cares if you are last in everything.

Gary, No one, including even Haley, has claimed that she was responsible for the million raised by the Foundation while she worked there. The most that has been claimed is that she increased contributions by doctors, and that she got the payday lenders to fork over some money, a few thousand each. And Shlomo, do you have information to that she didn’t sleep with the CEO, or are you just noting that so far no one has said that she slept with the CEO?

Why does every picture of her show such an ugly grin? I’m sure she could be sorta pretty, but no picture thus far would prove that. Oh, well. Pretty is as pretty does. How much about her is there still to come out? How can one person do so much so badly, and still run for office? SHe is very strange, and I hope we do not elect her.

Lexington Medical Center has turned into the Faux News of South Carolina. Give Republican hacks or their family sinecures with public money until they decide to run for public office again.

“Does this hat make my creepy look big?”

Nikki’s covent is going to be mad, Dont make Jenny fly in on her broom and gloat over you Will…….. She is preparing her hex as we speak Will Folks,,,,,
http://www.clownscharacters.com/jpgs/snazziwitch.jpg
http://i.ytimg.com/vi/dV7FQH4PO4s/0.jpg

Egad! When one has a horse mouth, a pretty face can make it work (e.g., Cheryl Crow).

No wonder Jennifer Wilson is pissed.

A picture from beyond the grave!!!

Fudrucken and Mojo, that is the face of a woman who had a lying and cheating husband. Now that they are divorced, she has become an attractive woman who has found happiness.

Why are some posters still critical of Nikki’s looks is beyond me.

Alabaster, are you saying Haley is divorced? Didn’t know.

Mark Sanford stated that Maria Belen Shapur was his soul mate, but he did “cross the line” with 6 other women. What line was that, and who are these women?

I saw one of these in DAWN OF THE DEAD:

Harpo, I was referring to Jenny as being divorced woman. That unflaterring picture must have been taken while she was married to Mark.
As for Nikki, she is still married and it seems strong in spite of those rumors.