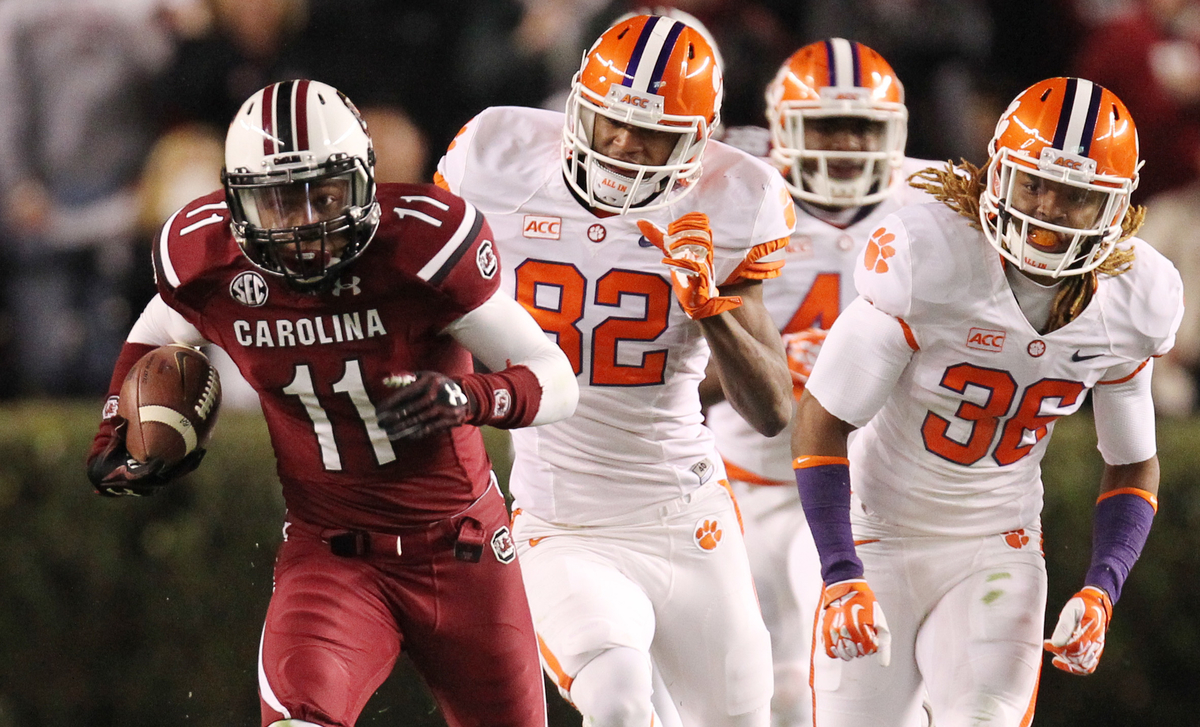 BOTH MAJOR PROGRAMS APPEAR TO BE IN REBUILDING YEARS

By WILL FOLKS  ||  I don’t have to wait until Monday morning to “quarterback” this … because it’s obvious: Both the University of South Carolina and its arch-rival Clemson are in rebuilding years.

After finishing the 2013 season ranked No. 4 and No. 7, respectively, the Gamecocks and Tigers have emphatically answered the offseason question of how key personnel losses would impact their 2014 campaigns (I’m referring of course to the departure of superstars like Jadeveon Clowney, Sammy Watkins, Tajh Boyd and Connor Shaw – as well as other key contributors like Bruce Ellington and Kelcy Quarles from the Gamecocks and kicker Chandler Catanzaro for Clemson).

The only problem?  The answer has been emphatically bad .

Both Steve Spurrier‘s Gamecocks (3-1, 2-1 SEC) and Dabo Swinney‘s Tigers (1-2, 0-1 ACC) are struggling – not struggling to match  the lofty heights both programs have reached over the last three seasons, but struggling merely to approach such rarified air.

How did Ward’s unit “redeem” itself?  By surrendering 379 yards and 20 points to friggin’ Vanderbilt, which was within a score of the Gamecocks with less than six minutes to go in the fourth quarter.

Down in Tallahassee Clemson had a golden opportunity to defeat No. 1 Florida State – which was playing without defending Heisman Trophy winner Jameis Winston.  Even after a pair of missed field goals and a botched snap killed promising drives, Clemson was still in a position to end the Seminoles’ eighteen-game winning streak.

But when it mattered most they fell apart on both sides of the football – prompting the national press to remark that Clemson had just, well, “Clemsoned.”

Twitter was not your friend this weekend, Tiger fans.  Not even a little bit.

Fortunately for Swinney, his squad can comfort itself with forthcoming matchups against North Carolina, NC State, Wake Forest, Syracuse and Georgia State.  In fact Spurrier’s Gamecocks are the only ranked team remaining on Clemson’s schedule.

South Carolina has a relatively mild schedule ahead of it too, with only one of its remaining games coming against a ranked opponent (on the road Oct. 25 against fifth-ranked Auburn).

That’s a good thing, too, because let’s be honest: Neither of these programs are ready for prime time.  At all.

Over the last three years the Palmetto State has seen its two major collegiate programs win a combined 65 games and send all sorts of elite talent to the National Football League.  South Carolina has been ranked in the Top 25 for sixty-nine straight polls dating back to 2010, and Clemson’s streak of fifty straight polls was only broken this week.

That’s not an easy level of accomplishment to maintain – and there will be years when the talent level drops off at certain key positions (as it has clearly done this year for both squads).

The challenge is to keep succeeding on the recruiting trail while reworking offensive and defensive systems that maximize the talent that’s available.  It’s also important to remember that as recently as 2010, eight or nine wins wasn’t considered “settling” – it was viewed as a damn good season.

Bottom line? While Clemson fans are bearing the lion’s (or Tiger’s) share of derision so far this season, neither squad has distinguished itself.