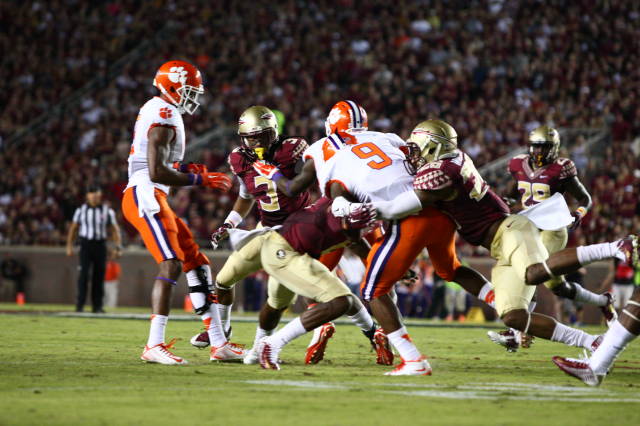 TIGERS FALL IN OVERTIME IN TALLAHASSEE

Call it another case of “Clemsoning.”  Perhaps the most painful one yet …

With defending Heisman Trophy winner Jameis Winston sitting on the sidelines serving a one-game suspension for spouting obscenities on campus, No. 22 Clemson had the top-ranked Florida State Seminoles on the ropes late in the fourth quarter in Tallahassee.

After Winston’s backup Sean McGuire threw an interception with two minutes left in the game – one of many mistakes he made in his first collegiate start – the Tigers (1-2, 0-1 ACC) had the football on the Noles’ eighteen-yard-line with the game tied 17-17.

But Clemson coughed up its shot at history, with junior tailback C.J. Davidson fumbling on a second down running play to give the ball back to head coach Jimbo Fisher’s offense.

Without Winston – who threw for 4,057 yards and 40 touchdowns a year ago – Fisher opted to run out the clock and take his chances in overtime, knowing Clemson was operating at a disadvantage without a reliable placekicker (junior Ammon Lakip missed a pair of field goals during regulation and is only 3 for 9 on the season).

Faced with a fourth-and-one on its first overtime possession, head coach Dabo Swinney opted against sending Lakip out to attempt a field goal.  The result was freshman running back Adam Choice getting stuffed by a Florida State defense that had surrendered more than 400 yards on the night to Clemson’s offense.

Clemson outplayed the Winston-less ‘Noles for most of the night – but simply couldn’t capitalize when it mattered.  An errant pass from quarterback Cole Stoudt in the first half and a bad snap to quarterback Deshaun Watson (who replaced Stoudt) killed a pair of red zone possessions – while Lakip’s missed field goals and Davidson’s fumble killed three more.

Dumbo was right, he’d take the final with an asterisk if needed he said. Well he got one. LOSS*. 3rd loss to a team with a back up QB*. 2 to USC and now 1 to FSU*. Best coach ever!!! To bad you cant play SC State every week. Waiting on GA State now. Clemsux will be lucky to get 7 wins this year.

It wouldn’t have even been that close if FSU played their 3rd string RB and the point guard at WR. FSU would have won by 2 TD’s at least. My guess, we wont have to hear from those Tater homers for at least another 3 weeks. Of course there is that “moral victory” of covering the spread. so we might. That or to hear about “bad calls”. If we are lucky we may even hear that FSU didn’t beat them, Clemson did it to themselves, that’s always a classic!

Yep, “we beat ourselves” is the meme they always pull out in order to tell themselves they didn’t GET BEAT and soften the pain. Sad.

Clemson had many, many opportunities to capitalize on and put the game away. DERP.

Hey, what was going through Jameis’ idjit brain that made him think it was a good idea to show up in full game regalia? Did he think Jimbo might put him in if things got desperate? It certainly wasn’t for comfort; pads are not the way to go for that.

“Beat themselves” is actually exactly what they did last night.

Taters take Clemsoning to a whole new level. Now 2-1 with their only win against SCSU.

Fix’d. My wine induced dyslexia is in effect.

TGB hates it when that happens.

Now 1-2 with their only win against SCSU.

When you put it that way…it really sounds bad.

Were it not for two missed chip shot FGs, a snap over the QB’s head (on the play following the uncalled TD that Dabo should have demanded a review of…) and the late fumble, Clemson would have had a win for the ages.

Having said that, TBG does not believe FSU, with or without Winston, is as good as they were last year. Their o-line and secondary look suspect.

Absolutely right about FSU, they may be on a winning streak but it won’t last much longer at this rate. One man can make a big difference, but it can’t make the whole team.

I knew you could do it-post something coherent and factual. +1. :-)

One man can make a big difference, but it can’t make the whole team.

“The exception that proves the rule.”

I agree that they are not as good as last year’s team. They are still very good. Winston has talent to spare, intellect of high capacity, but thinks like a child. Good luck, Jimbo, in keeping his silly ass out of jail for 4 more months. Then, good riddance.

Their offensive line is suspect? Maybe. In their defense, however, it is not a secret that Clemson’s Defensive line is real and that not many teams whether ranked or not will be as good, much less better.

We are “running back by committee.” Not a front runner for the position. That is our biggest deficiency with the exception of placekicker. Open try-outs ought to be held next week for the latter position.

We continue to make to many mistakes in the secondary, and both our angles and basic tackling skills are suspect (as is most of college football right now).

Last night’s play calling in critical spots is why Chad Morris has not been hired as a head coach. He stinks, He’s too damn cute, much like Bowden and Spence were. I’m betting there’s some other deficiencies in his skill set too as it relates to his aptitude and preparation for a head coaching spot.

The debate about re-loading or re-building this year is still prevalent although I lean to the former.

There is no longer a QB controversy (I don’t think there was one). Watson is now the starter. He’s just too talented to not be on the field.

Unfortunate game for Clemson. Just like I thought, they actually could have won this one, but they just missed too many opportunities. I was hoping to see FSU get knocked down a peg, too.

Watching the game, I thought to myself, “Not even Clemson can screw this up.” I stand corrected.

Watching the game, I thought to myself, “Not even Clemson can screw this up.”

the Washington Post pretty much sums it up. Clemsoning

First and goal from 1. Clemsoned it.

I try to be charitable toward coaching in tight spots but let’s face it: coaches are paid well to make the right calls in the critical spots. Many times those calls separate good teams from great ones and mediocre from good ones.

Two coaches failed the test last night. Their initials are DS and CM. They were on the Orange sideline last night.

Both ought to be running gassers up and down the stands at Death Valley this morning.

*Disclaimer: TBG has run a fever the last couple days…and second guessing TBBoBB may be evidence of delirium. *

TBG thought the game plan and play calling was pretty good as it gave us *many* chances to win. On the road. @ #1.

A vast improvement over the game that you were *forced* to look down on last year.

Execution and plain bad luck f**ked us in the @$$[remembers what happened to Jameis] …er, thwarted us in this game.

That’s OK, TBG, Banks McFadden did it all the time but it didn’t stop me or help me.

Annie always did say I talked too much.

I question the decision to go for it on 4th down in the overtime in spite of the FG kicker’s earlier performance, but find it inexcusable to run a play for 1 yard from the shotgun instead of under center?

Considering that a made field goal does not necessarily prolong the game and a missed one likely ends it…I think going for it was the correct call. The play they ran was either the wrong call or poorly executed. Should have run a slant to the endzone. No guts, no glory.

Exactly, and if you can’t get 1 loses yard you shouldn’t be playing. Too bad there were multiple times they couldn’t get 1 yard

*Lousy autocorrect got me

Wow Dooboo had the game and gave it away. Dooboo got nervous.

And ABC sucks. Showed Jameis more than the game.

Well, there’s no longer a need to use the verbose “…they didn’t beat us, we beat ourselves…” Instead you can just say “we Clemsoned it”. Interestingly enough when I tried typing in “Clemsoned”, my tablet offered “clumsy” as the appropriate alternate word…

It pains me to say it, but the title of this piece is 100% correct. I’m a die hard tiger fan and as such am used to a certain level of “Clemsoning”. In fact, since I had already anticipated losing to the Noles this past weekend I was ready for the defeat. Winston or no Winston though, Clemson managed to beat themselves which is a real shame considering how tough it is for us to win in Tallahassee and how well Deshaun played (except that fumble of course). The defense played their hearts out and all the sudden we found a passing game but missing 2 FG’s and failing to score from the 1 yd line…amongst some bone headed coaching at times is too much to take. I feel bad for the players.

Clemson is still better than everybody else in all regards. Don’t let reality fool you!

Please Clemtucky….never, ever get rid of Dabo!

An unidentified man accidentally discharger his personal handgun while cleaning the weapon, shooting himself in the foot. The admitting physician listed the action as “Clemsoning”…

Clemson did a lot better than anyone expected, or should expect. BIG moral victory.