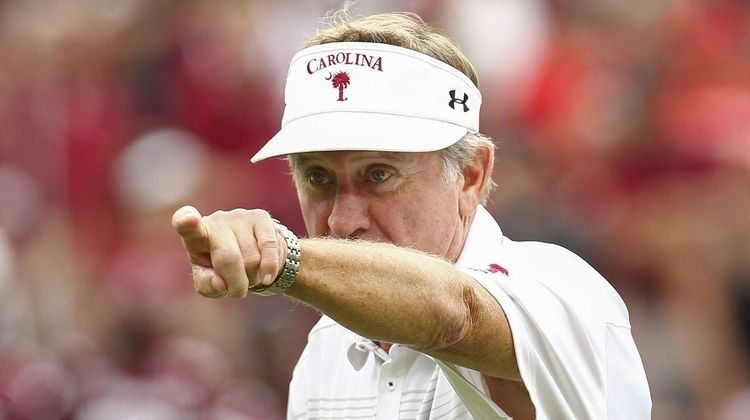 BALL COACH MOVES TO NO. 2 ON SEC WINS LIST

Despite being favored by three touchdowns, Spurrier’s Gamecocks (3-1, 2-1 SEC) struggled against undermanned Vanderbilt – needing a pair of late touchdowns to secure the historic win.

Vanderbilt hung around thanks to stellar special teams play – notably a pair of kickoff returns for touchdowns (91 yards and 100 yards) by sophomore defensive back Darrius Sims.  Vanderbilt also managed to make a game of it despite losing starting quarterback Patton Robinette in the first quarter with a head injury.

Robinette’s replacement – true freshman Wade Freebeck – played capably, but a critical mistake late in the first half swung momentum to the Gamecocks.

With Vandy enjoying a 14-10 lead and possession of the football, Freebek was intercepted by South Carolina defensive back Brison Williams – who raced 53 yards down the Commodore sideline to give the Gamecocks a go-ahead touchdown (and a lead they would not relinquish).

It wasn’t for lack of trying, though …

South Carolina struggled to hold onto the football all night, including a lost fumble by Mike Davis that made the game a one-possession affair with under six minutes remaining.

Davis finished the night with 82 yards on 17 carries.  He also caught four passes for thirty yards.

South Carolina’s fifth-year senior quarterback Dylan Thompson moved to 6-1 as a starter – completing 22 of 34 passes for 237 yards and three touchdowns.  Thompson added another touchdown on the ground.

Spurrier , at SC, reminds me of Earle Bruce at Ohio State. 8-3 Earle could never win a big game or beat Michigan…until he got fired!

Still entertaining. Dabo? What a fuckin loser. Can’t coach a lick. Clemson should have won by two touchdowns. They outplayed FSU.

Dabo Ervin? Bad comparison. Spurrier at USC would be an Earl Bruce at Ohio State who is on a five game winning streak over Michigan.

Joye77 Carson. you think Richard`s remark is amazing, last week I bought a brand new Mitsubishi Evo after making $9971 this-past/4 weeks and-just over, 10 grand last-month. this is certainly the most-rewarding I’ve had. I began this 5 months ago and pretty much straight away was bringin in more than $81 p/h. I follow the details on this straightforward website…….,..
.
http://Newyork.Com..<

Shee-jus man, you can’t expect everything in one artilcr LOL!

Looked like someone greased the football at one point, no one could hold onto the damn thing. So many fumbles…

Even so, GO COCKS!

LSU lost so will cocks move ahead of LSU in poll? Will Clemson drop out?