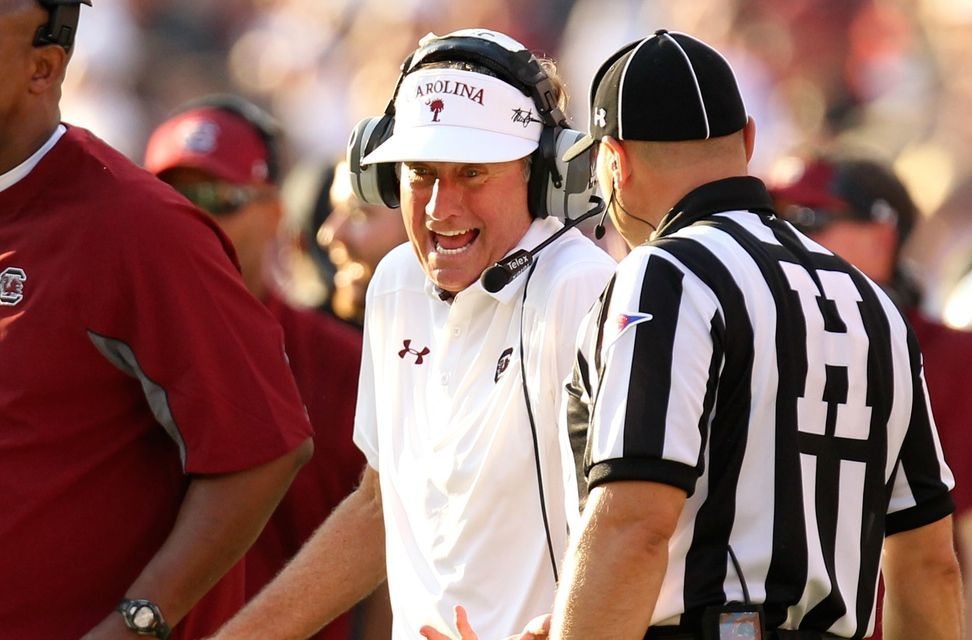 We don’t like to use the word “epic.”  In fact wherever possible, we actively eschew it.  Think about it: If everything’s “epic,” then nothing is epic.  Right?

We also can’t stand the “Keep Calm and (Whatever Whatever)” icons … unless of course they’re being worn by our favorite Twitterer, Ellie Chivette.

With those thoughts in mind, we’ve had a lot of people urging us to “Keep Calm and Trust the Visor” in the wake of last week’s humiliating University of South Carolina football defeat at the hands of Texas A&M.  That’s obviously a reference to visor-wearing (throwing?) USC head coach Steve Spurrier – who has guided the Gamecock program to unprecedented heights over the last four seasons.

There’s just one small problem with such advice: Spurrier can’t coach defense – which is where the Gamecocks (0-1, 0-1 SEC) were badly exposed last Thursday, surrendering a school record 680 yards of offense to the Aggies. 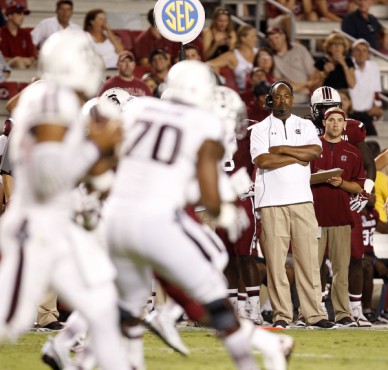 “Keep Calm and Trust Lorenzo Ward” doesn’t really have the same ring to it, does it?

This week the Gamecocks host East Carolina – which is coming off a 10-3 season (and which runs the same sort of up-tempo offense South Carolina struggled to contain last week).

Despite their “epic” (oops) egg-laying against the Aggies, the Gamecocks have been installed by the odds makers as 17-point favorites at home against the Pirates – who racked up 582 yards of total offense in their 52-7 season opening win over North Carolina Central last weekend.

Senior signal-caller Shane Carden completed 26 of 37 passes for 283 yards and three touchdowns, while senior wide receiver Justin Hardy caught eight passes for 87 yards and a pair of scores.  Hardy – who eclipsed the 1,000-yard receiving mark in each of the previous two seasons – also threw a 41-yard touchdown strike on a trick play in the first half.

We know what you’re thinking … the Gamecock defense is better than the North Carolina Central defense, right?