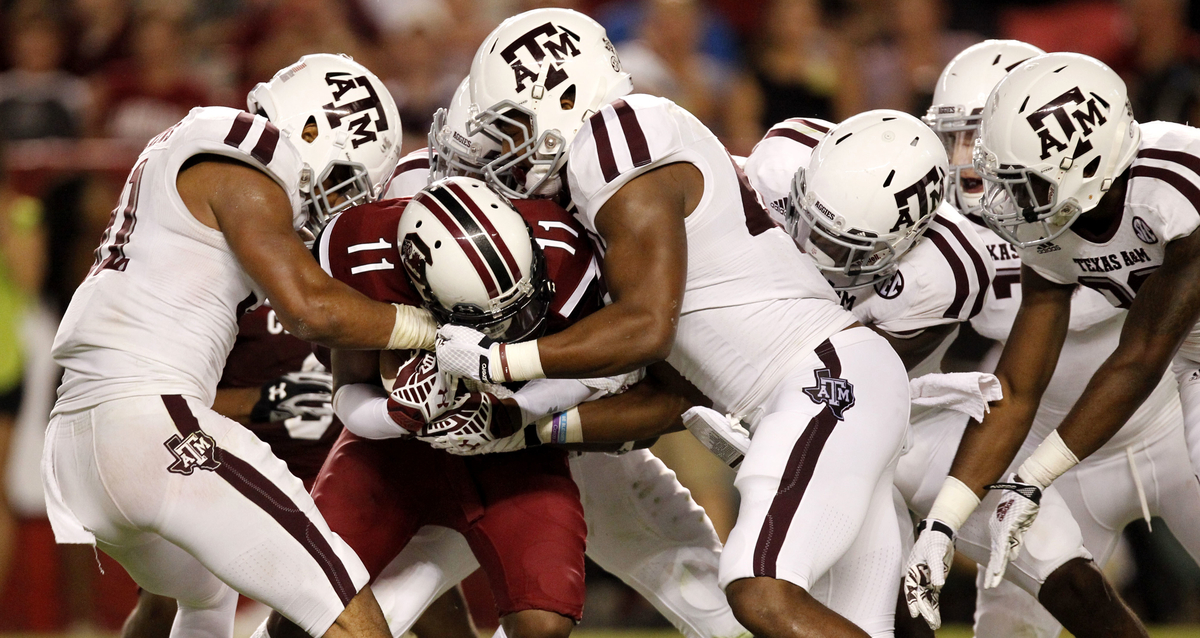 SOUTH CAROLINA HAS SOME SERIOUS SOUL-SEARCHING AHEAD …

University of South Carolina head coach Steve Spurrier has transformed the Gamecock football program from SEC doormat to perennial conference title contender … but if Thursday night’s season opening loss to Texas A&M is any indication, another rebuilding job lies ahead of him.

The No. 9 Gamecocks – who will be lucky to remain ranked in the Top 25 next week based on their performance against the Aggies – were badly exposed in this blowout loss.

“It was a mismatch tonight,” Spurrier said after the 52-28 drubbing.  “I don’t know what else you can say.”

There’s a lot more to say, actually.  Starting with the record-breaking collapse of defensive coordinator Lorenzo Ward‘s unit.  The failure of the Gamecock defense to put any pressure on quarterback Kenny Hill – who was making his first collegiate start in one of the most hostile environments in all of college football – resulted in a record-breaking night for the young gun. Hell, the guy threw for nearly 300 yards in the first half in leading the Aggies to a 31-14 lead at intermission.

“I just came out here and was ready to go,” Hill said after the game.  “I’ve been ready for this my whole life. Everybody was doubting us, and I was just ready to show people wrong.”

Meanwhile the 680 yards in total offense amassed by the Aggies was the most ever given up by a Gamecock defense … ever.

Incredible isn’t it?  In more than a century of mediocrity, South Carolina had never given up that many yards against an opponent.  It could have been worse had the Aggies not shown mercy on the final drive of the game – allowing the clock to run out rather than punch it in for another score.  That benevolence certainly didn’t lessen the Gamecocks’ humiliation … but in pulling up at the two-yard-line head coach Kevin Sumlin showed a courtesy and respect that Spurrier has never extended to his foes.

In fact of the four drives on which Texas A&M didn’t score – twice they were stopped by the clock, not the Gamecock defense.

“We have no pass rush, coverage was so-so and they knew what they were doing,” Spurrier said.

“We’ll see if we can look like we know what we’re doing as coaches,” Spurrier added.  “We’ll try to put our players in position. I think our players are better than what they showed, but I don’t know.”

The A&M aerial assault – comprised mostly of screen passes, quick slants and floaters (none of which went for more than 33 yards) – forced the Gamecock offense away from its strength, running the football and chewing up clock.  Behind arguably the best offensive line in the SEC, South Carolina picked up just 67 yards on the ground – including only 15 yards on six carries from junior Mike Davis, who left the game with a rib injury.

The lack of production on the ground made the Gamecock offense entirely one-dimensional, forcing fifth-year senior quarterback Dylan Thompson to throw the ball on virtually every down.  Thompson played fairly well – completing 20 of 40 passes for 366 yards with four touchdowns and one interception – but it wasn’t nearly enough against the overpowering Aggie offense.

Bottom line? Even without Connor Shaw – the winningest quarterback in the history of the program – the Gamecocks have the makings of a decent offense.

But in the SEC, defense wins championships.  And based on the Gamecocks’ defensive performance Thursday night, the SEC championship Spurrier so covets at South Carolina is well out of reach.

Prior to Thursday’s debacle, Ward predicted his defense would “play well.”

“You’ve got to be confident in the young men you put on the field,” he said. “It’s a reflection of you.”

It’s been previously speculated that Ward – who took over the reins of the defense in 2011 – was a mediocre coach blessed with exceptionally talented players (Clowney, Quarles, Melvin Ingram, DeVonte Holloman, D.J. Swearinger, etc).

Expect to see a lot of that narrative over the next nine days. Also expect the offensive coaches at East Carolina – where they run a similar up-tempo offense – to be licking their chops in anticipation of next Saturday’s matchup at Williams-Brice Stadium.

How Far Will The Gamecocks Fall?