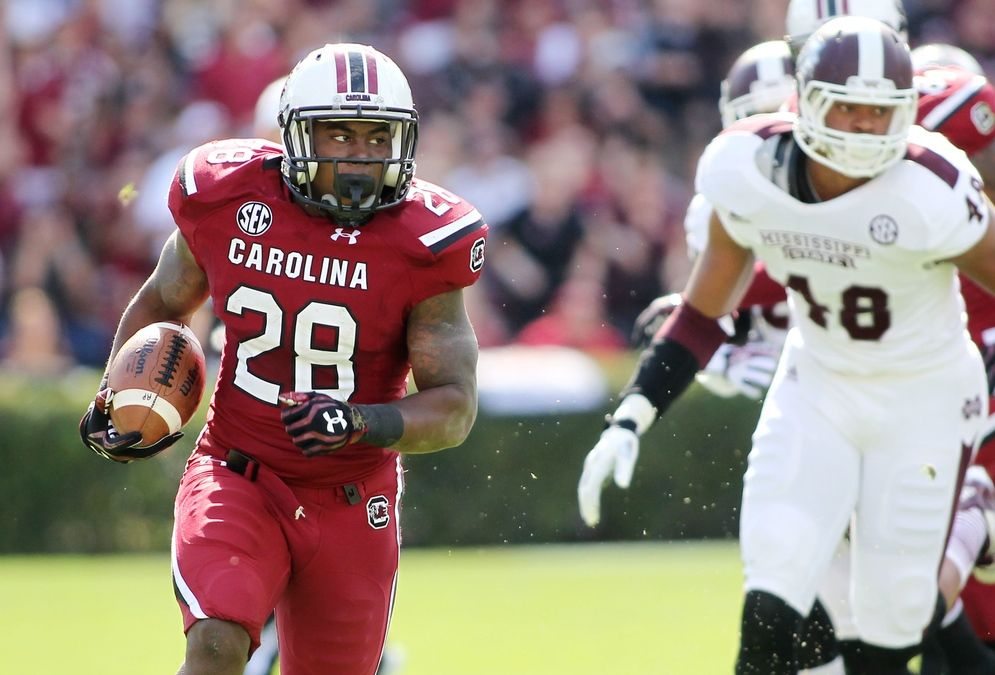 GAMECOCKS SHOULD RUN AWAY FROM AGGIES …

Even if returning 1,000-yard running back Mike Davis had been unable to play in Thursday night’s Southeastern Conference season opener against No. 20/21 Texas A&M, we would be picking his ninth-ranked University of South Carolina squad to “run” away with this one.

With Davis now projected to start … we see no reason the Gamecocks (0-0, 0-0 SEC) don’t take the first step in their quest for an SEC championship and a spot in the inaugural 2014 college football playoff.

Davis – a 5-foot-9, 223-pound wrecking ball – rushed 203 times for 1,183 yards last season, and the junior from Atlanta, Georgia is just one of head coach Steve Spurrier’s ground weapons.  Redshirt juniors Brandon Wilds (from Blythewood, S.C.) and Shon Carson (from Lake City, S.C.) are more than capable of picking up huge chunks of yardage against the Aggies’ defense – which surrendered 5.4 yards per rush and 222.3 rushing yards per game a year ago.

There’s no reason to believe Davis, Wilds and Carson will have any trouble finding holes, either, as South Carolina returns four starters on its offensive line – giving Spurrier strength and experience up front where it matters most.  Those linemen average 6-foot-5, 314 pounds, too, giving the Gamecocks a decisive size advantage in the trenches.

In other words it could be a tough debut for heralded true freshman Zaycoven Henderson – the Aggies’ much-ballyhooed nose tackle.

A solid ground game should open things up for starting quarterback Dylan Thompson – who has performed admirably in extended relief of departed starter Connor Shaw over the last two seasons.  Spurrier says Thompson is poised for a “big year” – with Damiere Byrd and Shaq Roland likely to be among his top targets.

On offense, Texas A&M lost its three best players – offensive tackle Jake Matthews, wide receiver Mike Evans and quarterback Johnny Manziel – to the first round of the NFL draft.  That’s the bad news for head coach Kevin Sumlin.  The good news? South Carolina lost its best defensive player in Jadeveon Clowney – who was the first player selected in the draft.

Sumlin will start sophomore Kenny Hill at quarterback, although Aggie fans are hoping to get a peek at highly touted freshman Kyle Allen – who is currently listed at No. 2 on the A&M depth chart.  Both signal-callers will look to exploit a size advantage at the wide receiver position – assuming A&M running back Tra Carson is able to get anything going against Lorenzo Ward’s defensive unit.

Ward predicted this week that his unit would “play well” against the Aggies’ up-tempo offense.

“We just got to get lined up in a hurry because they’re going to go fast, and execute our assignments,” he said.

Odds makers have installed the Gamecocks as a 10.5-point favorite at home.  We think the spread’s going to be bigger than that, hence our inaugural 2014 #FITSPick: South Carolina 38 Texas A&M 22.

This is the first-ever meeting between these two programs – and the first game ever broadcast on the new SEC Network.  Kickoff from Williams-Brice Stadium in Columbia, S.C. is scheduled for 6:00 p.m. EDT.