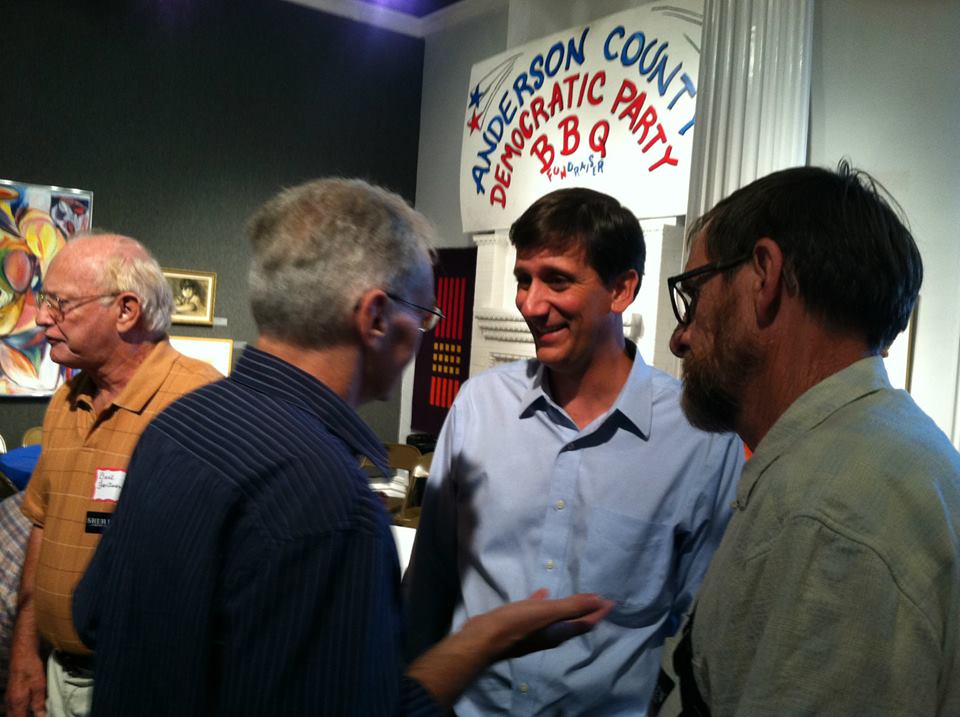 S.C. Democratic gubernatorial nominee Vincent Sheheen‘s 2014 campaign has been nothing short of a disaster … a case study in how NOT to run against a vulnerable incumbent (“Republican” Nikki Haley).

In fact Sheheen’s candidacy is only credible because a pair of non-establishment candidates – Libertarian Steve French and self-styled “independent Republican” Tom Ervin – have launched credible candidacies of their own.

Without them, he’d be nowhere …

Sheheen has, however, belatedly stumbled upon something resembling a legitimate criticism of Haley’s administration – specifically the bogus “welfare-to-work” claims made on behalf of her scandal-scarred Department of Social Services (SCDSS).

“Nikki Haley’s claims regarding jobs and welfare to work are not true, and new reports along with even more whistleblowers are surfacing each day to bring the truth to light,” Sheheen said this week. “She’s campaigning on the numbers that she and her staff manipulated to cover up the truth of her unethical behavior.”

FITS most recent report on Haley’s “welfare-to-work” lies can be found HERE, but we also did a big story on the issue back in 2012 after Haley’s go-to reporter – Seanna Adcox of the Associated Press – ran a piece regurgitating the governor’s misinformation.

Anyway, Sheheen has finally figured out that it’s not in his best interest to continue letting Haley brag about moving 20,000 South Carolinians from “welfare-to-work” when she didn’t actually do it.  So he’s finally challenging the numbers – and accusing Haley of enriching her campaign contributors in addition to manipulating government data.

Specifically, he’s referring to contracts awarded to a pair of private firms that donated to Haley’s campaign and to the Republican Governors Association – firms which later received taxpayer-funded contracts from SCDSS.

Repo Man: Back In Action!

This election is NIMRATA’s to lose.
And, BY GOD, she is making a magnificent effort!

Snatching defeat from the jaws of victory!

Please leave that to the South Carolina Democrat party. They need some reason to exist in this state.

Vince can easily beat that clown.

We can only hope.

Notice that Nikki’s campaign does not use attack adds at the moment. That is a clue that the Tea party is in trouble. Or the fact that her campaign money from outside SC see’s the outcome. Either way, pack your bags. You wasted millions of taxpayers money, with more to come in lawsuits.

Haley can beat him with both hands tied.

too bad her hole is open

To copious amounts of HARD cash!

My guess is that Sheheen is waiting until the right time to unleash his full assault on Haley’s BS. She’s kicking his butt in the fundraising arena and he doesn’t want to shoot his load too soon and run out of funds. Either that or Andrew Whalen is in way over his head and will probably never get another gig in politics again!

Is it that hard to campaign against someone that is a pathological liar? Is Sheheen going to finally pull his out of his ass and simply refute almost every statement Haley makes? He should be able to win on the basis of her record alone.

Sheheen has his own pathological liar: Jean Toal. She is as involved in this campaign as she has ever been in any in her life. She is sending him “messages” through trusted servants and do-boys – as in James Smith and a few others. There is other intel on this issue what will come out soon. It really is pathetic.

A Democrat is a Democrat and that says enough. They hate real equality and the name of God. The only thing they love is money and power and regardless of who they are they march in Lockstep to Obama,Holder and the party of Pelosi and Reid. Think about it. If you play with fire you get burned,you take poison you die. All the warnings in the world do not substitute for facts. Sic can’t cover up his hate for Haley.

LMAO!!!! In the past 24 hours we have learned how desperate the socialists are in SC from FITS. The ship is sinking.
Posted a Business Insider article that ranked SC #8 economy in the nation while praising the policies of Haley.
What do we get from FITS? An article about unemployment ticking up despite the BIGGEST drop in unemployment in the past year and a half and a baseless fantasy about ‘sub prime’ auto loans! Then we get an article defining the incompetence of Sheheen while then praising him and stating that Ervin and French are running “credible” campaigns-I would assume to FITS a “credible” campaign is spending over 3.5 MILLION $$$$ for 2% of the electorate and French showing off his wifes “tits” on FITS (hey French, Ervin uses “trustintom”-thought about “trustintits”) !
Governor Nixon (DEMOCRAT) from Missouri defined last night why SC can’t trust Democrat’s like Sheheen and Ervin as governor. Nixon, under pressure from the DOJ and White House, declared the police officer in Ferguson GUILTY and stated that he should be prosecuted-even before a Grand Jury was convened.Democrats don’t believe in the rule of law and if you elect a Democrat governor be assured they will buckle to the demands of Obama, the DOJ and turn on law enforcement in SC in these difficult times.

and Sandi earns her $1 from the Haley campaign

The Troll slithers from beneath her rock!

SLED and you could be next ?

Next for what? Feds want to know. Who is your “contact” person at SLED?

Next for what? Feds want to know. Who is your “contact” person at SLED?

What, gonna report that contact to boss Haley so she can make sure the appropriate people are fired?

No worries.You can’t get fired.Will Folks appears to be to nice of a guy. :-)

Dear God does it ever shut the fuck up …Geez like a broken fucking record we get it you love to eat her shit….

Every blog post that FITS writes about Nikki Haley always seems to have a hint of incredulity to it which is still interesting to me after 4 years. He knew she was a liar and a cheat since she was supposedly having an affair with him. Does he think that character is compartmentalized?

“Does he think that character is compartmentalized?” Absolutely, how else do you explain his bromance with T-Rav?

Whose character are you talking about? Folk’s or Haley’s.

The reason Sheheen is going on the offensive now is because we are actually within 90 days of the election. What FITS doesn’t understand about politics could fill the Library of Congress many times over.

This coming from the self-appointed FITS pollster that had Elizabeth Colbert Busch up 10+ points-until the weekend before the election. We had Sanford up 3%-5% after the ONLY debate she would agree too. Fool.

I only commented on what a reputable pollster showed in their poll — weeks BEFORE the election. That same pollster showed Sanford in the lead by the time of the actual election. Just because a football team leads at halftime, doesn’t mean they automatically win at the end of the game. I’m sorry if that concept is too complex for you to understand.

Predicting a Republican (Sanford) will win a ruby red district (SC-1) is not much of a risk.

I’ll willing to post my predictions for all SC statewide races and all U.S. Senate races and all the Governorship’s on the Sunday prior to the election, if you will do the same.

Really could have fooled me, I’m not sure I’ve heard French mentioned anywhere but here and the few times I’ve heard Ervin’s named mentioned has universally been negative. If those are examples of “credible” candidates, if hate to see what non-credible looks like- oh wait, we already have T-Rav!

As opposed to Gilligan Sheheen, T-Rav has rock star looks and apparently even a personality even when not coked up.

“As opposed to Gilligan Sheheen . . .”
It’s slim pickings for Democrats in South Carolina – we do the best we can. Needless to say I am NOT enthusiastic about Sheheen in the least – but will vote for him in hopes of dethroning Haley.

Look… I can suppress my gag reflex only so long.

Virginia w/ a Democrat Gov who got in because of a Third-Party dope, is $2.4 billion in debt. Gov. Terry McCauliffe said he will stuff Obamacare and Medicaid expansion down their throats by exec. order. even though the GA rejected it.
SCPD has a GREAT REAL political story about what SC will be like w/ a D in office of Gov.

The chopping block could come to you ?

Careful Tango. I believe your life has been threatened.

Yes, some random comment referencing a chopping block means that some super hacker/assassin badguy is going to track you down and murder you while you sleep. There’s literally nothing else that could mean.

Sandi’s chopping block is in November.

You should be worried since you both live in the same mobile home.

I heard him speak once at a professional conference during the last election season. Not very inspiring. He gave a speech suitable for a Rotary Club meeting, i.e., bland platitudes aimed at know-nothings. He needs some better advice.

Haley is going to lose this year she has screwed us all over the last 4 years with the data breach DSS Scandals Georgia Port Deal…Etc….Its a fact