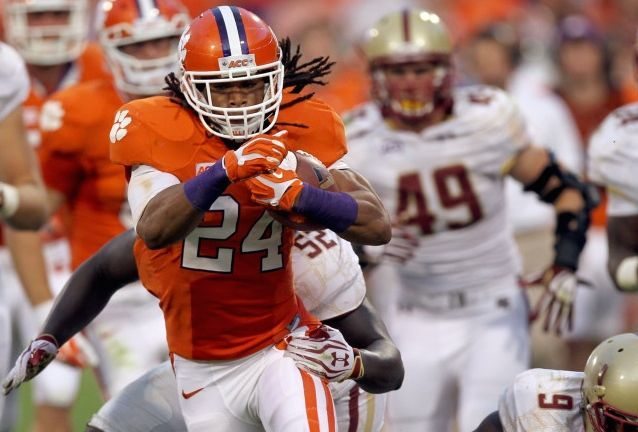 Clemson University’s football program suffered a major blow when its top returning running back – junior Zac Brooks – was lost for the season due to a foot injury.

“Zac was having an outstanding camp and was ready for a terrific year,” Clemson head coach Dabo Swinney said.  “The plan is for Zac to sit out this year due to the injury and come back next year as a red-shirt junior. This is a big loss because he is such a reliable player in all phases of the game.  He knows the offense inside and out.”

Brooks carried the football 48 times for 246 yards in 2013 – scoring a pair of touchdowns.  He also caught six passes for 83 yards and another touchdown.

The 6-foot-1, 190-pound native of Jonesboro, Arkansas was the number two running back on the Clemson depth chart heading into the 2014 season opener against No. 12 Georgia.

Last year, Jones caught a 31-yard touchdown pass from Tajh Boyd to help lift the Tigers to a 38-35 win over the Bulldogs.

Brooks’ injury places additional pressure on senior tailback D.J. Howard, who was listed as the team’s top tailback heading into the 2014 campaign.  Clemson has boasted a 1,000-yard rusher in each of the last three seasons.

much more to this story – give it a few days.

Lol…there’s always a conspiracy, isn’t there

Usually it is you idiot Tater fans with the conspiracy theories. If you cant beat em, make up some story about them huh?

Damn, the Win will be because he is hurt !

Playing Dabo this year will be like sittin’ down to Sunday dinner and reaching for the white meat. 5 wins, 7 losses.

Tough loss, and they definitely can’t afford any more losses at RB position.