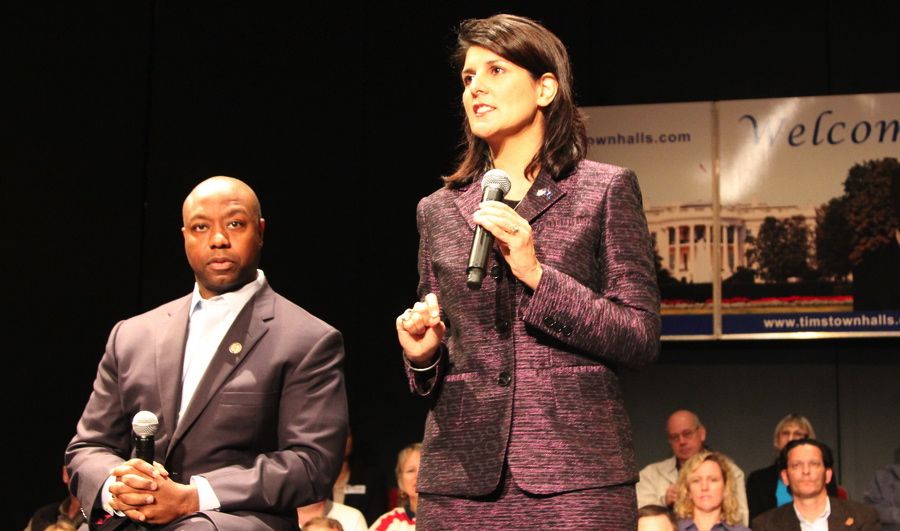 A month ago, Public Policy Polling (PPP) released the results of a survey showing incumbent “Republican” Nikki Haley in a dogfight with S.C. Sen. Vincent Sheheen.

This week, The (Charleston, S.C.) Post and Courier  and a trio of television stations commissioned a new poll on the governor’s race that shows a dramatically different lay of the land … at least on the surface.

According to The Post and Courier  poll, Haley is up on Sheheen by a whopping 13 percentage points in a head-to-head race – 53-40 percent (with seven percent undecided).  That’s good news for the governor.  Very good news.

The bad news?  When the pollsters open the race up to a four-way competition – adding the names of “Independent Republican” Tom Ervin and Libertarian nominee Steve French to the mix – Haley’s lead evaporates.

In that race, Sheheen is well within striking distance – trailing Haley by only four points, 46-42 percent.

“Going under fifty percent when alternatives are presented is bad news for her,” one national pollster told FITS.

Ervin has vowed to spend big bucks on his candidacy – which kicked off this summer with a successful petition drive to get his name on the ballot.  French’s campaign has spent just $9,000 – but a spokesman says the Lowcountry businessman is beginning an aggressive fundraising push.

If either of those candidates gains traction, Haley could be in real trouble come November …

Rick Perry Is A Tough Guy

Looks like the flood of Unaccompanied Alien Children and Ukraine conflict are not at the top of the voters list.

Which one of the following six issues will most influence your vote at
the polls this November – job creation, taxes, health care, education
and public schools, roads and transportation or illegal immigration?

The thing about the democrats, you’ve F*#k#d up on everything. So the order of importance, is meaningless….

PS: “remarkable accurate” That phrase is ridiculous two-fold, considering you’re talking about PPP. …Hate to bring that up – at least the typo aspect – but these little @$$ wipe minions of your bash me, even when there is no mistake.

“…Hate to bring that up – at least the typo aspect – but these little @$$ wipe minions of your (sic) bash me, even when there is no mistake…”

This is especially funny since GT edits his mistakes away and pretends the people who find his typos simply lied about it.

If ANYONE would know that, I’m sure it’s YOU. Thanks for the correction.

Locally sponsored polls very often are skewed to left or right. I have to agree PPP has had a solid track record in the last two election cycles. Taken together it suggests that SC voters are very disgruntled with Haley – and looking to vote for alternatives. The more voters who go to French and Ervin the less likely Nikki is to survive this cycle. And anything can happen. She and her administration have shown an increadible ability to be inept. A strong hurricane impacting the Low Country and Midlands where her response is pathetic would be extremely damaging. Also, with T-Rav spiking insurgent voters to abandon establishment incumbents, the storm could – and I say COULD – be starting to form against her. Still, Fatboy and the RGA will funnel her a few million to help offset the Dems cash fund that will be used against her.

“with T-Rav spiking insurgent voters to abandon establishment incumbents” Sic Willie is one of your alternate pen names Rocky?

Hey, Wil can’t get credit for my pithy T-Rav comment. We can’t be the same person, Wil looks a lot better with a g-tee than I do.

At least in Mr. Sanford’s race earlier this year they (PPP) didn’t do so good;

and another quote from PPP, same report;

“If SC-1 voters went to the polls on Tuesday and voted for the candidate
they personally liked better, Colbert Busch would be the definite
winner.”

Both of those quotes from PPP just before the Sanford/Busch face off.

I’m not going to give PPP much attention.

Sanford won, so they got it right. Most pollster don’t even risk polling special elections.

They were the most accurate pollster of 2012.

Get that mansion fumigated…cause it’s gonna need it, and let the new first family move in!!!!!

Has no one at fits or at the Post & Courier questioned why would Shaheen’s support increased from 40% to 42% when two more candidates are added to the poll.

Both polls have an Undecided of 6% or 7%. If the polls are an accurate reflection of the electorate, there is only one explanation. Some voters switch from Haley to Shaheen when presented with more choices. Because Shaheen, Ervin and French picked up votes and undecided remained about the same, Shaheen’s addition votes had to com from Haley.

Of course, there is up to a +/-4% margin of error but the error must be near the 4% extreme for Sheheen not to lose any votes in four way race and instead gain 2%. Why wouldn’t the experts quoted in the P & C notice this inconsistency in the polls?

When asked who’s rump they’d prefer to see unclothed, Sheheen out paced Haley 56 to 38 with the remainder throwing up. When asked who could do a better job as governor Sheheen was selected by 85 percent of those responding. Asked to identify significant contributions made to the state only 5 respondents said “create jobs” and those respondents were living in Savannah and accidently called in the poll – and referred mainly to the Savannah River Sell-Out. Asked to list Haley’s greatest accomplishments respondents listed 1) Having Sex with Sic Willie 2) Getting rid of her 80s hair 3) Getting her daughter an internship in state government 4) Racing around the universe (obviously confusing her with Haley’s Comet). One respondent insisted Haley was the best Governor ever, and has been identified as Sandi Morals.

When it comes down to Election Day, 90% of those who say they’ll vote for a 3rd or 4th party candidate never do.

Looks like in the Fall we’ll have Sheehan on Arsenal Hill and Brad Hutto on Capitol Hill…. all because of the GOP internecine fighting. Thanks, FITS!