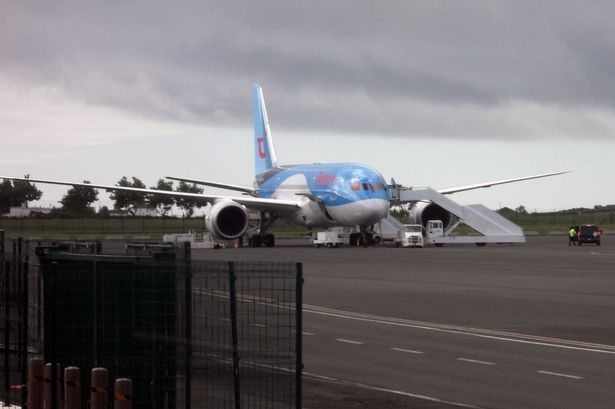 “WE WILL NOT BE FLYING ON THAT PLANE AGAIN”

A Boeing Dreamliner traveling over the Atlantic Ocean lost power to one of its engines – forcing the troubled, next-generation passenger jet to make an emergency landing at a military base on a remote island.

The incident – which received scant national press – occurred just two-and-a-half months after the much-maligned aircraft was cleared for trans-oceanic travel.

“They call it the Dreamliner but it was more like a nightmare,” one of the passengers told The Manchester (U.K.) Evening News .

This particular Boeing 787 – owned by British-based Thomson Airways – was traveling from the Dominican Republic to Manchester with more than 200 passengers and crew aboard when it began to inexplicably lose altitude over the ocean.

“We could see on our screens that our altitude was dropping about 500 feet every minute,” another passenger told the paper.  “The captain said he had to fly lower because he only had one engine. It looked like we were just dropping into the Atlantic.”

The ordeal continued after an emergency landing at an American military base in The Azores, as passengers were surrounded by armed guards and forced to stay on the tarmac for more than five hours.

Eventually they were allowed to disembark …

“We will not be flying on that plane again,” the passenger added.

The Dreamliner has was grounded in 2013 as a result of an issue with its lithium ion batteries – one of many problems the plane has experienced since entering commercial service in October 2011.  Originally scheduled for delivery in May of 2008, numerous design, supply and delivery problems pushed Dreamliner’s deadline back more than three years – causing numerous cancellations.

South Carolina builds Dreamliners at a government-subsidized manufacturing facility in North Charleston, although that facility has been dogged by production problems.

Related Topics:Boeing 787Dreamliner
Up Next