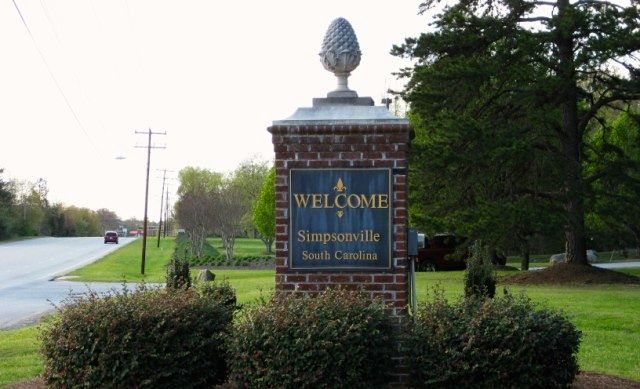 Why are you (appearing to) playing hands-off when it comes to corruption in the Upstate? First, the Simpsonville Police Chief was fired and threatened to sue.  Then, an officer on the force was fired and charged with destroying evidence in a long-standing cold case of murder.  As it turns out this officer was the only officer on patrol when the murder occurred in his jurisdiction.

Then, after an election that changed the balance of power on city council, the fired chief was re-hired and the current chief retained so a new position was created.  Then, the new chief threatened a lawsuit unless his salary was not raised by $20,000 in the upcoming budget.  To top it all off, the sitting Mayor was arrested for threatening a judge and is awaiting trial.

Whether or not any of these trials take place may depend on someone keeping a spotlight on things.

Now, the third in command of the Greenville County Sheriffs Office – a major from Berea – has been fired after his name came up in an FBI investigation.  Just so that you have a little background, most of the major players in the sheriffs office here have roots from the Berea area including the former elected sheriff Sam Simmons who died of a heart attack shortly after winning office in an upset. That made way for the current sheriff to take office.

In case it was before your time he had just worked out at the local YMCA and crashed his car after suffering a heart attack.

Conveniently there was a homicide detective in the car behind him and witnessed the entire event so everything was conveniently wrapped up.

To go further back into history would be pointless but many of the same names that surfaced during Operation Lost Trust, and I don’t mean the black lawmakers that caught the headlines but the bigger names along with lobbyist Ron Cobb are in many ways tied to the ones still pulling the strings in the upstate.

How about working some of these events into your site for the benefit of your readers from the Upstate? The corruption here makes the Midlands look like child’s play.

-Anonymous (please and thanks).

Anon: I assume you are referring to police chief Keith Grounsell and mayor Perry Eichor.  I’m told Eichor wanted to give Grounsell $114,000 in “back pay” for fourteen months.  I’m also told a local woman who protested this proposed payment was arrested.  Sounds like Simpsonville, S.C. is your typical South Carolina small town, where corrupt politicians and crooked cops do as they please while the rest of us pay the freight for their antics.  Please keep FITS in the loop on the various goings-on in that neck of the woods, will you?  And I’ll certainly let you know if this website uncovers anything related to your tips …

Is Simpsonville is either Lexington or Richland counties? If not, then it is not in Sic Willie’s universe. Only exceptions are wherever carpetbagger Davis, T-Rav or little Mulvaney may be at the moment.

Well he printed this so maybe not.

should read “Is Simpsonville in….”

You should get an “Edit” option just below your post. Between the up or down icons and “Reply.”

Over the years, I have heard rumors about that town being really bad.

LOGON TO THE SITE –>>CLICK TAB FOR MORE DETAIL AND HELP

It’s not only Simpsonville – the bigger issues are county wide and decades in the making.

Unfortunately most small towns still have a “Boss Hog ” somewhere in the area. Weather it be an elected “official” or the guy who “owns” the town. Most of the revenue is made off the yankee trap run by the “law enforcement” of the town. Sadly that is how it is and it won’t change.

Are there cops or prosecutors anywhere who are not corrupt?

Aren’t Lexington and Greenville considered THE most Republican counties in SC?

Good examples why you need a strong two-party system in this state–just to keep the other party honest if nothing else. As it now stands, it appears that only the Feds are doing that to any extent. Ever wonder why Republucan officeholders continually inveigh against “outside interference” and “meddling by Washington.”

Not to mention the PCB “scandal that started with the Lyman PD and has evolved into a multi-state investigation by the EPA which has affected about every major sewer district on the I-85 corridor from Greenville to Charlotte and is going to cost the sewer agencies serious bucks which will be passed along to the customers of said sewer districts.

Lyman City council decided to give this dude their beloved K-9 dog because the other K-9 officer claimed he was tired of being a K-9 cop (like Lyman REALLY needed a K-9 dog). they gave the cop being charged for evidence tampering the fucking dog and all his gear (cost was around $10,000 bucks) because the Lyman Town Council felt that was “Best for the dog” because no one else has bonded with the fucking mutt as much as this perp has!!!!

Seriously, you can’t make this shit up if you tried!!!!!

You need to be on top of this one too!!!

If I’m not mistaken, Grounsell was sexually involved with one of his subordinates on the Simpsonville PD (maybe EMS or FD – I forget) but he was banging someone working for one of the Emergency Responder agencies fer sure.

“That little head will get the big head in trouble every time”!!!!!

Actually not true. He wanted to terminate the previous assistant chief due to some allegations regarding her relationship with a member of the FD. This caused trouble with city management, etc and that is supposedly what led to the fight. However, the entire episode was messy. One example was that the city claims that they were told he was Academy certified when he was not so he had to take a multiple week leave to return to the academy after being hired. Point is, the entire thing was a train wreck but now he is back on the job. The apparent request for a raise sounded like extortion but there are two sides to every story and he and the city now appear to have “made nice”. However, it has not been publicized whether or not the city caved. This is relevant to a city who has been having sewage back up into their homes, pipes caving in, money lost to Aloft and other failures and can’t keep the city running due to money shortfalls. The city taxes for Simpsonville are skyrocketing.

My main premise is accurate:

Somebody was banging somebody and that is what led to the whole sordid affair.

Again:
“That little head will get the big head into trouble every time” and this is proof of that

Corruption in these fine Christian communities?