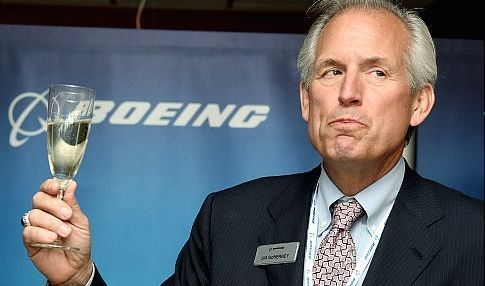 Jim McNerney – the CEO of crony capitalist aircraft manufacturer Boeing – made a major gaffe on a conference call earlier this week, referring to the company’s workers as “cowering” before him.

The 64-year-old executive made the remark when a reporter asked him about his future with the company after his upcoming 65th birthday.

“The heart will still be beating, the employees will still be cowering, I’ll be working hard,” McNerney said, according to Bloomberg News . “There’s no end in sight. We’re continuing to build a succession plan and alternatives to succeed me eventually, but there’s no discussion of it yet.”

Needless to say Boeing’s workers – especially the unionized ones – didn’t appreciate McNerney’s remark, with the head of the International Association of Machinists and Aerospace Workers calling them “unfunny and unnecessary.”

Two days later McNerney issued a statement apologizing for his comments – which he claimed were “a joke gone bad.”

“I was simply trying to make light of my age and tenure at the company,” he said. “There was no intent to slight anyone but myself, and the last thing on my mind was to characterize my relationship with Boeing employees in any negative way.”

“I should have used different words, and I apologize for them,” McNerney’s statement continued. “I will definitely be more careful going forward.”

McNerney’s gaffe comes as Boeing is attempting to have its multi-billion dollar, taxpayer-guaranteed slush fund – a.k.a. the U.S. Export-Import Bank – reauthorized.  This website has consistently opposed “Boeing’s Bank” because it unnecessarily exposes taxpayers to risk and raises prices for air travelers due to reduced competition.

Good … couldn’t happen to a nicer company as far as we’re concerned.

Unlike the rest of the bought-and-paid-for mainstream media, we’ve been able to get inside Boeing’s North Charleston, S.C. facility to get the real scoop on serious production problems and the increasing likelihood the plant will be unionized.

The War Against Uber