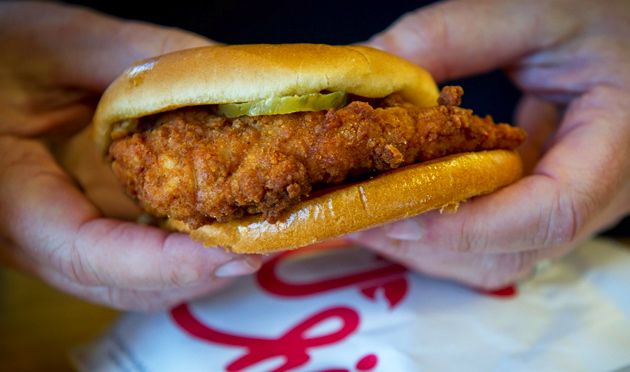 Chick-fil-A has fewer stores than its fast food rivals. Its owners are staunch social conservatives in a world of increasing tolerance for diverse sexual orientations.  Oh … and every single Chick-fil-A store is closed one day of the week (Sundays, for religious reasons).

In other words, there’s no way in hell (sorry, “heck”) that Chick-fil-A should have overtaken Kentucky Fried Chicken (KFC) in terms of market share.

But that’s exactly what happened … two years ago.

According to a new industry report (.pdf HERE), Chick-fil-A has expanded its system-wide sales from $1.5 billion to more than $5 billion over the past decade – an annual growth rate of 12.7 percent.  In 2012, it achieved 25.1 percent of the “American limited-service chicken segment,” besting KFC’s 24.4 percent.

That gap grew in 2013, with Chick-fil-A enjoying a 26.3 percent to 21.9 percent market edge over KFC (despite there being more than twice as many KFC locations).

So … what’s next for the company?

Chick-fil-A has roughly 1,700 locations – well behind fast food giant McDonald’s 14,278 locations.  But according to the report, the chain has become a “serious and growing competitive threat” to McDonald’s.

“If Chick-fil-A can add $6.3-$9.0 billion to its systemwide sales over the next 10 years, it is entirely possible that this will be similar to – or worst-case, from McDonald’s perspective – greater than the systemwide sales that McDonald’s can add to its domestic business over that same time,” the report concludes.

While Chick-fil-A’s founders may hold out-of-the-mainstream views on social issues, the company benefited from a public rebuke of overwrought political correctness two years ago.

We offered this Solomon-esque wisdom at the time …

If you want to be gay, be gay … if you don’t, don’t.  Same goes for eating chicken sandwiches.  The government should have nothing to do with condoning or assailing either choice.