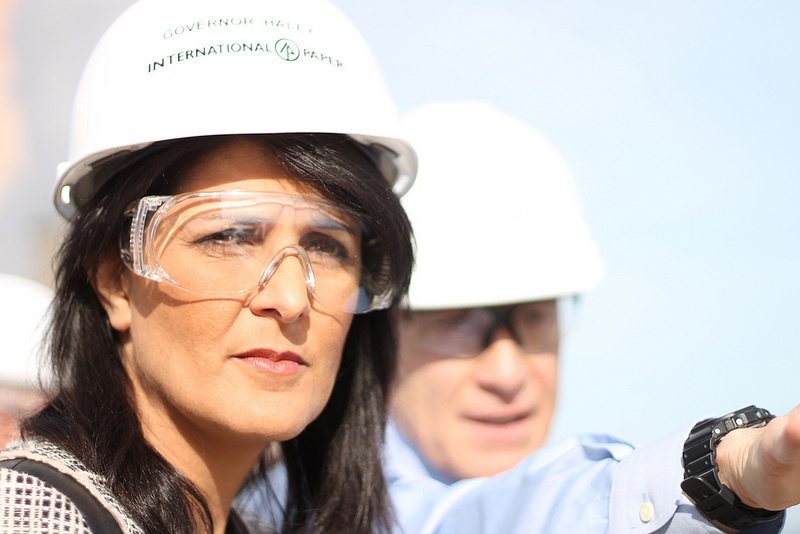 SELF-PROCLAIMED “JOBS GOVERNOR” CELEBRATES A COMMAND ECONOMIC TRIFECTA … BUT AT WHAT COST? AND WHAT BENEFIT?

S.C. Gov. Nikki Haley was ebullient on Monday as her Commerce Department rolled out back-to-back-to-back jobs announcements along the Interstate 77 corridor just south of Charlotte, N.C.

According to the governor, more than 7,000 new jobs are coming to the region over the course of the next decade via announcements from three companies – Singapore-based Giti Tires, Charlotte-based Lash Group and Boston-based LPL Financial.

Haley called her economic development trifecta the “ultimate hat trick,” and said the announcements were “the reason they are calling us the beast of the Southeast.”

Critics were quick to point out Haley’s sketchy record when it comes to jobs announcements – as well as the state’s record low labor participation rate (currently fourth-lowest in the nation).

“South Carolina has one of the worst employment-to-population ratios in the country because rather than finding jobs and getting back to work, South Carolinians are dropping out of the workforce,” S.C. Democratic Party spokeswoman Kristin Sosanie said. “Nikki Haley’s serious problems delivering on economic announcements are matched only by her dishonesty and failure to acknowledge what’s really going on for South Carolinians.”

Meanwhile at the other end of the political spectrum fiscal conservatives lamented the tens of millions of tax dollars being doled out to these companies – including one which was merely moving its headquarters seven miles south.

“Okay, so Haley announces all these great jobs,” one North Carolina resident told us. “Except for the tire plant where are the new jobs? Is South Carolina paying money to these corporations just to move across the border? How many folks are going to uproot their families or just commute a few miles further? I’m a North Carolina liberal but this corporate welfare to no benefit for any average working person has got to stop. If South Carolina or North Carolina has an advantageous business climate then let the business pay for the move. Otherwise it is just a gift from the taxpayers.”

Oh, and speaking of gifts from taxpayers … what does one of Haley’s much-ballyhooed “hat trick” of companies do?

“Looked up the Lash Group, and yeah, it helps people get their Obamacare,” one limited government operative told FITS.

Times are tight, people. And luring good jobs to the region is vitally important to turning things around. But the best way to accomplish that isn’t through government bribery – it’s through the creation of competitive tax climates that promote fairness and free market growth.

North Carolina gets that … which is why most of the people associated with these three announcements will be Tar Heels, not Sandlappers.

Just Say “No” To Molly Spearman