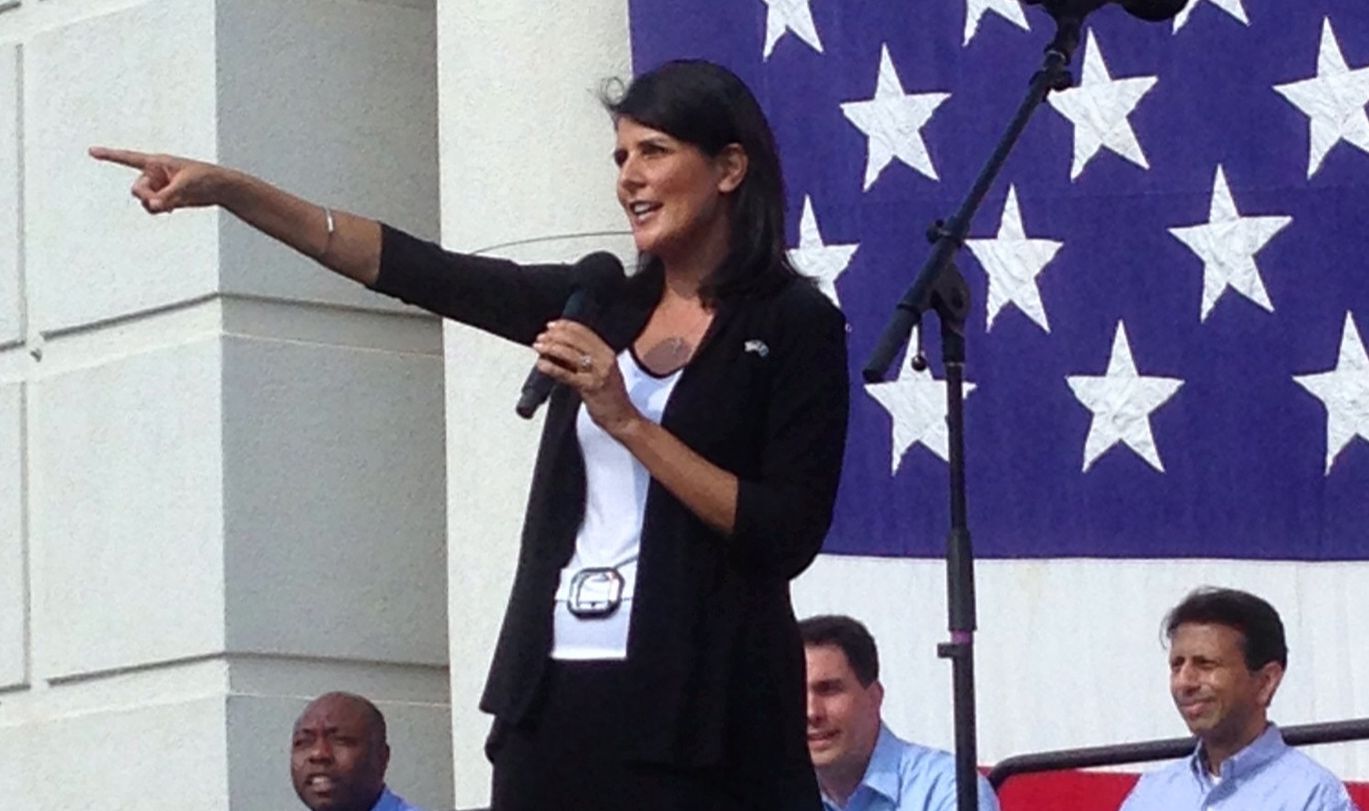 S.C. Gov. Nikki Haley didn’t draw a big crowd for her 2014 reelection kickoff event last week, but she served up plenty of rhetorical red meat for her supporters – most of it targeting U.S. President Barack Obama and his soon-to-be implemented socialized medicine law.

“When it came to Obamacare, we didn’t just say ‘no,’ we said ‘never,'” Haley told her audience.

She also claimed to support efforts to block funding for the legislation, saying “we’re going to keep on fighting until we get people like Senator Tim Scott and everybody else in Congress to defund Obamacare.”

“She stood up against Obamacare and said no for the United States and for South Carolina,” Jindal said.

Here’s the problem, though … like most of what comes out of Haley’s mouth (and the mouths of her surrogates), the truth is always conditional.

Late Friday afternoon – as Labor Day weekend (and the first weekend of college football) kicked off – Haley’s campaign spokesman Rob Godfrey slipped a barely noticed “clarification” to the governor’s favorite reporter, Seanna Adcox of the Associated Press. According to Godfrey, Haley’s support for defunding Obamcare is conditional on whether doing so could conceivably lead to a shutdown of the federal government.

In other words Haley supports defunding the legislation – except if it means doing the one thing that might actually defund it.

We wrote recently on the issue of defunding Obamacare – referring to it as “the last line in the sand” for the Republican party, which won control of the U.S. House in 2010 due in large part to backlash against the hated legislation (and has made doing away with the law its top priority).

“The GOP has voted (unanimously in almost every case) to repeal all or some of Obamacare nearly forty times over the last three years,” we wrote. “Now that victory is within their grasp, though, the GOP leadership in the House – notably Speaker John Boehner and ‘majority’ leader Eric Cantor – is refusing to fight, citing fear of a government shutdown.”

As limited government leader Bill Wilson recently noted, this fear is misplaced. Polls show a majority of Americans are opposed to Obamacare – most of them strongly so. Meanwhile the percentage of those who strongly support the legislation is in the teens. Also Obama – weakened by a flood of recent scandals – is increasingly vulnerable on economic, tax and spending issues (all of which are touched by this law).

“Any fear or timidity on the part of Republicans regarding a shutdown debate over Obamacare has no basis in reality,” Wilson wrote.

Indeed … which is why it is absolutely inconceivable that “Republicans” like Haley are afraid of challenging the administration on the issue.

Not only are they afraid, though – they are surrendering before the first shot in the battle has even been fired, arguing that the GOP-controlled House of Representatives should pass a budget that fully funds Obamacare (even though the law is clearly not ready for prime time).

Talk about waving the white flag …

All “Republicans” have done for the last three years is rail on Obamacare (and rightfully so). In 2010, for example, the centerpiece of Haley’s gubernatorial bid was that her opponent Vincent Sheheen was an “Obamacare liberal.” In fact that’s a phrase you should expect to hear a lot more of over the next thirteen months as the governor empties her campaign war chest in an effort to secure a second term for herself.

But when Haley makes that claim, remember this: She is among those establishment “Republicans” steadfastly opposed to doing the one thing – the only thing – that would actually defund Obamacare.

Which makes this another Haley hypocrisy …

@fitsnews a government shut down is a false narrative created by the left. Obamacare can be defunded without any shutdown. Cruz laid it out.

@fitsnews @nikkihaley If she's so anti-federal gov't, why did she ask for gov't money because it rained too much? http://t.co/j9aCTzxQWJ

I am simply wondering why she asked for federal relief for the excessive rain. http://www.charlestoncitypaper.com/TheBattery/archives/2013/08/30/federal-government-names-south-carolina-a-disaster-area

It’s odd, but on cable tv they have a weather channel – 24 hours of nothing but weather. We had something like that where I grew up. We called it a window.

Here’s the problem, though … like most of what comes out of Haley’s
mouth (and the mouths of her surrogates), the truth is usually

She can’t handle the truth. What a sad little girl.

Another confirmed sighting of a Fake, a Fraud and liar!
In a name, Haley!
The mirror image and spitting image of OBama!
Vote out Haley! “It will be a great day in South Carolina”!
“Join The movement.”

Or how Obamacare-by-another-name is quite popular with people who are against Obamacare.

A middle-aged man in a red golf shirt shuffles up to a small folding table with gold trim, in a booth adorned with a flotilla of helium balloons, where government workers at the Kentucky State Fair are hawking the virtues of Kynect, the state’s health benefit exchange established by Obamacare.

The man is impressed. “This beats Obamacare I hope,” he mutters to one of the workers.

Or how Republicans (besides Romney) have backed state health care exchanges before.

Bill Wilson is a dipshit as are the lemmings following him.

I think it is reprehensible that have resorted to using facts. That is not fair when debating Republicans. Facts just confuse them, and they will not be dictated to by fact checkers. Besides we all know the facts are biased against Republicans.

I’m still suspicious of that face which could be fotoshopped – eyes too small, nose too straight, and chin too rounded……….

What do you expect from someone who wages a war on obesity yet packs on the pounds on the taxpayer’s dime?