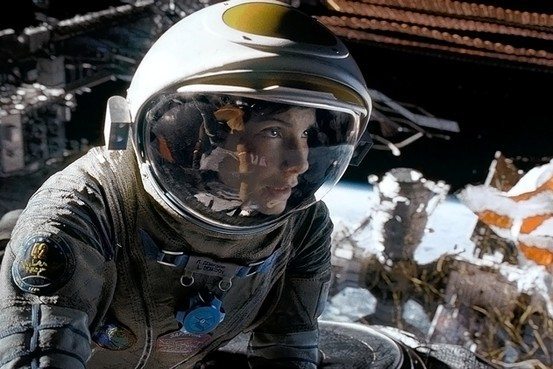 There aren’t a lot of movies we look forward to watching anymore but Gravity – the 2013 space odyssey starring Sandra Bullock and George Clooney – was one of them.

Directed, co-written and co-produced by Alfonso Cuarón – the movie depicts a Space Shuttle crew led by Dr. Ryan Stone (Bullock) and veteran astronaut Matt Kowalski (Clooney) who are in the midst of repairing an orbiting telescope when (cue timpani) disaster strikes.

An attempt by the Russian Federation to shoot down one of their orbiting satellites backfires – producing a chain reaction of satellite collisions and a mass of high-speed orbital debris.

In addition to its initial critical and commercial success, we think it has all the makings of an enduring classic.

Missed it? Here’s the trailer …

After watching Gravity, our first thought … aside from marveling at how amazing the 49-year-old Bullock looked … was whether the sort of “chain reaction” space junk apocalypse depicted in the movie could really happen.

So we went digging … and the answer is: Definitely maybe.

The scenario depicted in Gravity is known as the Kessler Syndrome. It was first proposed in 1978 by a NASA scientist named Donald J. Kessler – and it holds that there are so many satellites (and so much space junk) orbiting the planet that collisions are not only likely, but could easily snowball into “ablation cascades” of debris.

Can it happen? According to Kessler, it already is.

“It’s building up as I expected,” Kessler told reporter Corrinne Burns of The (U.K.) Guardian. “The cascade is happening right now – the Kosmos-Iridum collision was the start of the process. It has already begun.”

For those of you who missed it, the Kosmos-Iridum collision was the world’s first “hypervelocity collision” of two satellites. It occurred in February 2009 when an out-of-service Russian military satellite (Kosmos 2251) smashed into an operational American communications satellite (Iridium 33). At least 1,000 pieces of large debris resulted from the crash.

Much of this debris – about a quarter of it – has burned up in the earth’s atmosphere. The rest of it is still orbiting the planet – and in one case actually forced the International Space Station (ISS) to make a course correction in order to avoid an impact.

Of course while Kessler says his “syndrome” has already begun, it is slow-rolling – as the “chain reaction” initiated by the Kosmos-Iridum collision is currently only projected to produce collisions every ten years.

A much more worrisome scenario involves the European Space Agency (ESA)’s Envisat – an 18,000-pound environmental satellite that mysteriously went offline in April 2012 as it circled the earth. On January 21, 2010, Envisat was almost struck by a discarded Chinese upper-stage rocket body weighing more than four tons.

How close was “almost?” Forty-eight yards, according to the U.S. Joint Space Operations Center. Had the two massive objects collided, the ESA said “a major orbital debris issue” would have ensued – one with the potential to create a dramatic escalation of the Kessler Syndrome.

Envisat – which is routinely in close contact with other orbiting objects – is not expected to naturally fall from the sky for another 150 years.

So … should you be worried about any of this?

As screenwriter Aaron Sorkin once wrote, “the most costly disruptions happen when something we take completely for granted stops working.”