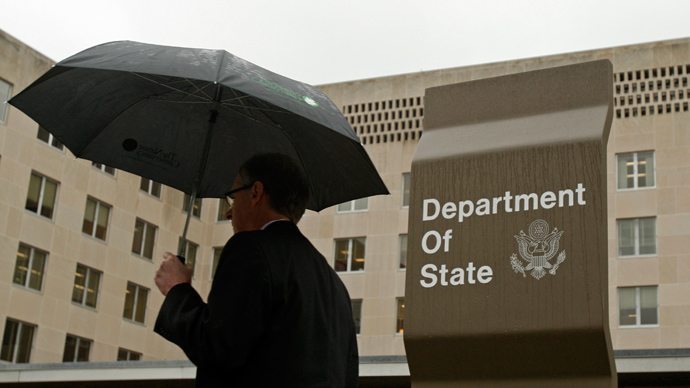 COSTLY AMERICAN MEDDLING IN THE UKRAINE IS NOT PROMOTING FREEDOM

By Ron Paul || It was almost ten years ago when, before the House International Relations Committee, I objected to the U.S. Government funding NGOs to meddle in the internal affairs of Ukraine. At the time the “Orange Revolution” had forced a regime change in Ukraine with the help of millions of dollars from Washington.

At that time I told the Committee:

We do not know exactly how many millions—or tens of millions—of dollars the United States government spent on the presidential election in Ukraine. We do know that much of that money was targeted to assist one particular candidate, and that through a series of cut-out non-governmental organizations (NGOs)—both American and Ukrainian—millions of dollars ended up in support of the presidential candidate…

I was worried about millions of dollars that the U.S. government-funded National Endowment for Democracy (NED) and its various related organizations spent to meddle in Ukraine’s internal affairs. But it turns out that was only the tip of the iceberg.

Last December, U.S. Assistant Secretary of State Victoria Nuland gave a speech in which she admitted that since 1991 the U.S. government has:

[I]nvested more than 5 billion dollars to help Ukraine … in the development of democratic institutions and skills in promoting civil society and a good form of government.

This is the same State Department official who was caught on tape just recently planning in detail the overthrow of the Ukrainian government.

That five billion dollars appears to have bought a revolution in Ukraine. But what do the U.S. taxpayers get, who were forced to pay for this interventionism? Nothing good. Ukraine is a bankrupt country that will need tens of billions of dollars to survive the year. Already the U.S.-selected prime minister has made a trip to Washington to ask for more money.

And what will the Ukrainians get? Their democracy has been undermined by the U.S.-backed coup in Kiev. In democracies, power is transferred peacefully through elections, not seized by rebels in the streets. At least it used to be.

The IMF will descend on Ukraine to implement yet another of its failed rescue plans, which enrich the well-connected and international bankers at the expense of the local population. The IMF adds debt, organizes sweetheart deals for foreign corporations, and demands that the local population accept “austerity” in exchange for “reform” that never seems to produce the promised results.

The groundwork for this disaster has been laid by NED, USAID, and the army of NGOs they have funded over the years in Ukraine.

Supporters of NED and its related organizations will argue that nothing is wrong with sending U.S. dollars to “promote democracy” overseas. The fact is, however, that NED, USAID, and the others have nothing to do with promoting democracy and everything to do with destroying democracy.

How should we promote democracy overseas? First, we should stop the real isolationists — those who seek to impose sanctions and blockades and restrictions that impede our engagement overseas. We can promote democracy with a U.S. private sector that engages overseas. A society that prospers through increased trade ties with the U.S. will be far more likely to adopt practices and policies that continue that prosperity and encourage peace.

In 2005, arguing against funding NED in the U.S. foreign assistance authorization bill, I said:

The National Endowment for Democracy…has very little to do with democracy. It is an organization that uses U.S. tax money to actually subvert democracy, by showering funding on favored political parties or movements overseas. It underwrites color-coded ‘people’s revolutions’ overseas that look more like pages out of Lenin’s writings on stealing power than genuine indigenous democratic movements.

Sadly, matters are even worse now. To promote democracy overseas, NED and all other meddling U.S. government funded NGOs should be disbanded immediately.

So, as you can see, we must logically also abandon democracy to save democratic system.

K. All you ultra-liberals/liberals can’t wait to read your posts giving old Ron hell and tell him how wrong he is.

Just because he’s against war, intervention and nation building doesn’t make his reasons for it right.

Ron Paul’s reasons for opposing war, intervention and nation building as are as moral and genuine as they come. The non-interventionist foreign policy for which Paul advocates is a direct extension of John Stuart Mill’s non-aggression principle. The concept of preemptive war is fundamentally at odds with the continuation of a constitutional republic, as the government and the establishment media can always scare stupid Americans into thinking any tin pot dictator will bomb us if we don’t invade them. And humanitarian interventions, often the favorite of neoconservatives disguised as liberal internationalists, are merely pretexts for state violence, because assuming that the U.S. military can fix a civil conflict of a sovereign nation-state half a world away, simply by sending in troops, dropping bombs or feeding one side money and weapons, is the folly of arrogance. Our meddling in Ukraine has backfired, just as it did in Iran in the 1970’s, Lebanon in the 1980’s, Iraq in the 1980’s and 1990’s and Afghanistan since we supported them against the Soviets in the 1970’s and 1980’s. You are wrong for continuing to believe that the U.S. has both the moral imperative and economic ability to police the world and remake it in our own image.

Ron Paul’s reasons for opposing war, intervention and nation building as are as moral and genuine as they come.
——–
He doesn’t believe in foreign aid… do nothing that doesn’t help your own family. That’s moral – take care of blood first – sure it is. Not Christian, but moral. The point is, don’t let anyone do anything for you, and don’t ask for help. And fuck em if they can’t take a joke, because this isn’t a charitable organization.

War isn’t what bothers him – it’s the cost.

Foreign aid is more often than not bribe money from our government to support policies that are otherwise contrary to the national interests of the receiver state. We sent foreign aid to Egypt for three decades until Mubarak was ousted, and most of that money served as payment in exchange for their recognition of Israel. We gave foreign aid to Saddam in the 1980’s to assist him in invading Iran on two separate occasions, which resulted in the murder of almost 1 million Iranians. We give billions every year to Israel and shoestring that “aid” to the purchase of weapons from American defense contractors, which essentially then becomes a taxpayer subsidy to the military industrial complex. We have given billions to the Ukraine over the past decade to ensure a pro-western government remained in Kiev, even if meant supporting right-wing nationalists whose views were similar to those of Neo-Nazis. The idea that foreign aid actually goes to those who need it is laughable. And just because our government doesn’t give countries aid in the form of taxpayer dollars does not prevent you or I from voluntarily donating money to the tens of thousands of worldwide NGO’s who actually have a record of assisting those in need. You, like most in this country, seem to take the government at its word when it comes to foreign aid. They are lying to you.

That’s a lot of words to say the same thing.

I forgot most liberals do not work, so the overwhelming majority of posters on FITS are probably still asleep or in line for a freebie somewhere. Will check back in to read comments later. Paul

Ghetto’s are almost always safe between 6am and noon.

I forgot most liberals do not work

—–
I believe you. Did you know Condi Rice forgot that Saddam Hussein *wasn’t* seeking uranium from Africa? And that Reagan *forgot* about trading arms for hostages?

Forgetting that most liberals do not work is on a much lower plane, I’m sure.

still, ukraine is probably better off with yanukovych gone and maybe even better losing crimea and its huge population of soviet malcontents. yanukovych was down to stealing the copper wiring from the palace. his exit might have been urgent. and pointing to one episode in one country is a weak case for dumping on the promotion of democracy. we cannot actually control events. you have to place multiple bets.

Interfering with Russia and Crimea is protected by the Constitution! It’s in there somewhere about inviting superpowers to intervene in our own civil wars.